Note: La Sportiva shoes are built on European half sizes which are smaller increments than US half sizes. This gives us four extra sizes per size run which gives you a better fit!

The Men's Trango Ice Cube GTX Mountaineering Boot is La Sportiva's lightweight, insulated, and Gore-Tex option for technical alpine missions in any season. Thermo-Tech Injection's seamless construction works with the waterproof breathable Gore-Tex Insulated Comfort membrane to shed snowflakes, resist raindrops, and keep your foot dry from start to finish. The stretchy Schoeller gaiter also assists with wet weather protection without interfering with your mobility on the mountain, and the thermo-sealed zipper offers a secure closure that doesn't allow seepage.

Underfoot, the Trango Ice Cube uses a sturdy, supportive, and warm Honeycomb Tech footbed with various midsoles underneath. PU adds stability at the toe and heel, cushy EVA comforts the center and heel, and TPU inserts enhance stability where you need them most. Vibram's One sole is exclusive to La Sportiva, featuring rugged lugs and semi-automatic crampon compatibility to help you conquer any terrain you come across.

Not worth the benefits

I have done a handful of mixed routes, ten days of ice and only two alpine routes in these and already the front toe welt is worn well beyond use! Also the third time i laced these up one of the lace locks ripped right out of the plastic molding! I have had various pairs of Sportiva boots in the past and worn them into the ground. But these are barely out of the box and pretty much useless to me now! 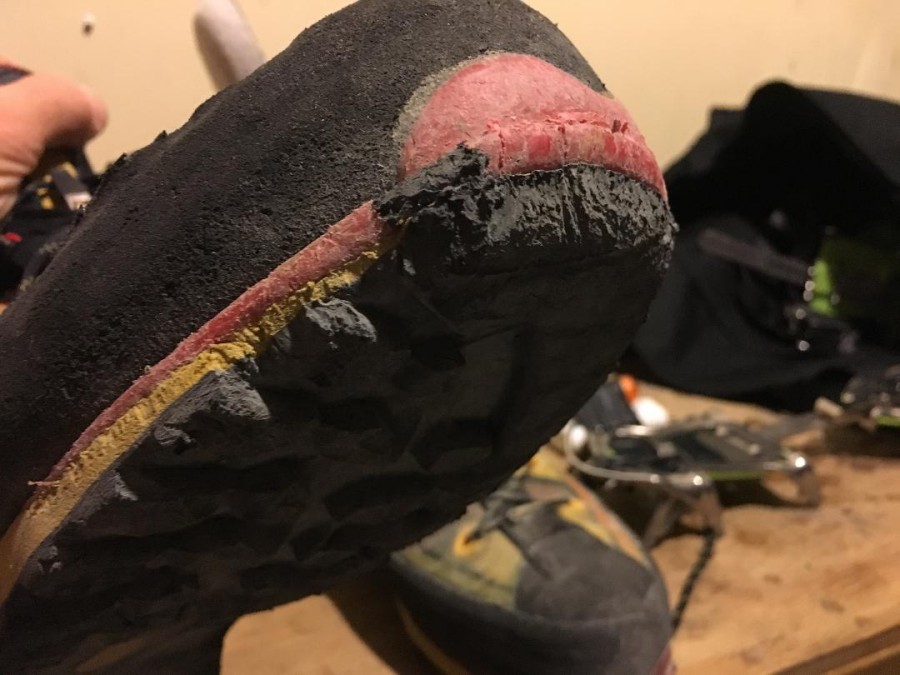 On the LW side of the LW/durable divide

Climbing: These are stellar boots, but they are not durable. Within a 1.5 months of climbing in them in Patagonia (not approaching, only climbing), I succeeded in ripping the zipper, in two spots on right boot and wearing down the sole + toe-bail to the point where it could no longer hold my crampon. Normally at this point I would have sent them in for a resole, but when you are halfway around the world on a climbing trip, that is not an option. On the flip side, they are super light, so hanging them of your harness while putting it in on rock pitches is totally reasonable. Sizing: They do run a little narrow, but break in over time. For reference, I wear a 42 TC Pro. Gator/height: The gator is pretty great, but the overall cut on the boot is short, so it is hard to rely on the stiffness of the boot to reduce stress on your calves. Warmth: I did climb in them on some 0 degree days in Bozeman and my first were cold, but not frozen, so I would allow that they are very warm for the weight. Overall: due to the lack of durability compared to the price, I would only wear them in environments where I was moving on snow and ice most of the time (walking in talus, sand, climbing in them on rock sans crampons destroyed them). But then this doesn't make much sense, as areas where you are always in the snow are likely going to be cold and require double boots (Alaska, Himalaya, Rockies) or at least will be cold enough that you want something warmer. Maybe a good boot for Chamonix, or if you have epic deals. I am going to reach out to Sportiva about replacing them, but I don't I'll have any luck, as they will reduce it to "normal wear and tear". My buddy has the same pair that he took to Patagonia this year and the plastic eyeletes for the laces broke.

These boots are awesome. They're very light and climb ice exceptionally well. I got the same size as my Nepal Evos and the fit was perfect. Unfortunately after 7 days of normal ice climbing, one of the plastic lace locks on my left boot broke off, rendering the boot largely unusable on steep ice (you couldn't tighten the laces around the foot/ankle junction). Backcountry responded to my RMA request and it would appear they're sending me a new set of boots, but I'm concerned that this could happen again in the future. I also know of at least one other pair that had this same issue.

Hey James, DId you have any pictures of the breakage? I guess I should also be asking anyone from Backcountry what La Sportiva said about the breakage and about warrantying any of them that have future issues. Is the plastic vulnerable to cold? Is there a solution in the works? The Trango cubes have been out long enough to show signs of weaknesses in the design and construction. How cold were the days you were climbing in?

Ice Cube versus Batura 2.0 The Batura has the least amount of rocker of all the others but still more than the Ice Cube. They have a similar feel when walking with having less rocker. 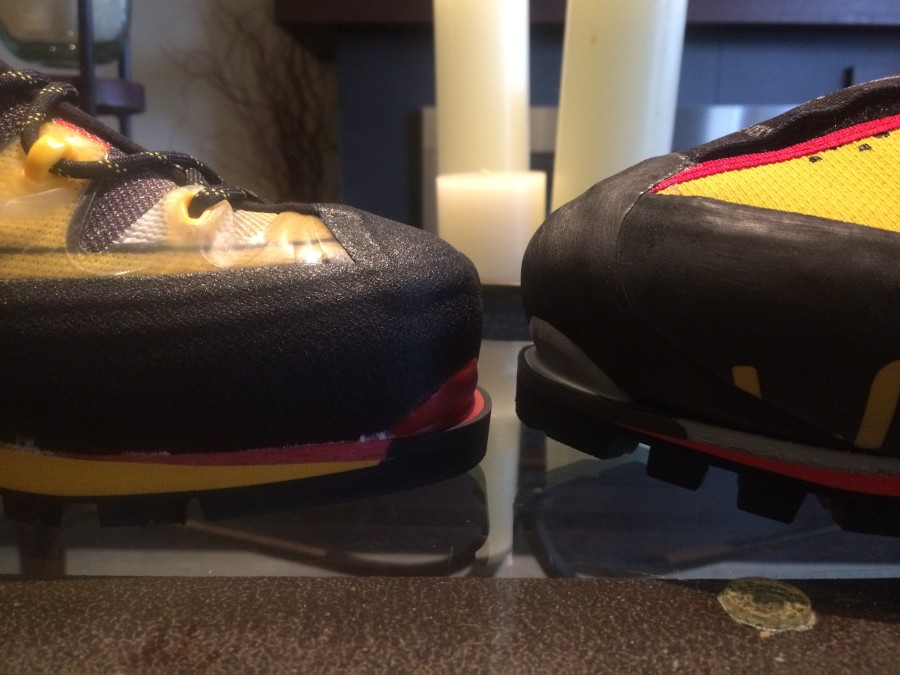 A Trango in a Snaggletooth 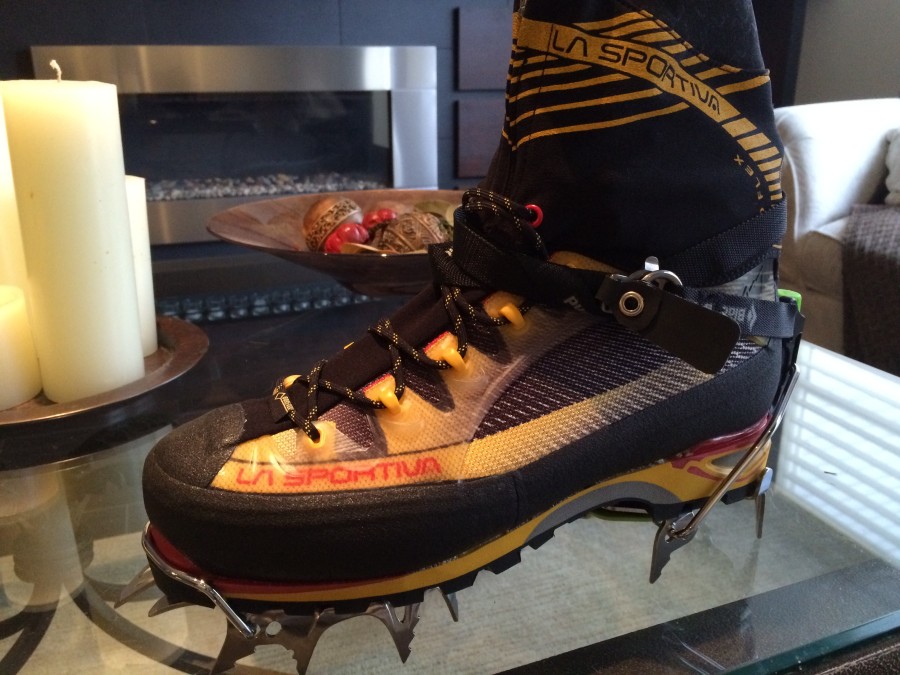 The non insulated X Alp versus the Insulated Ice Cube 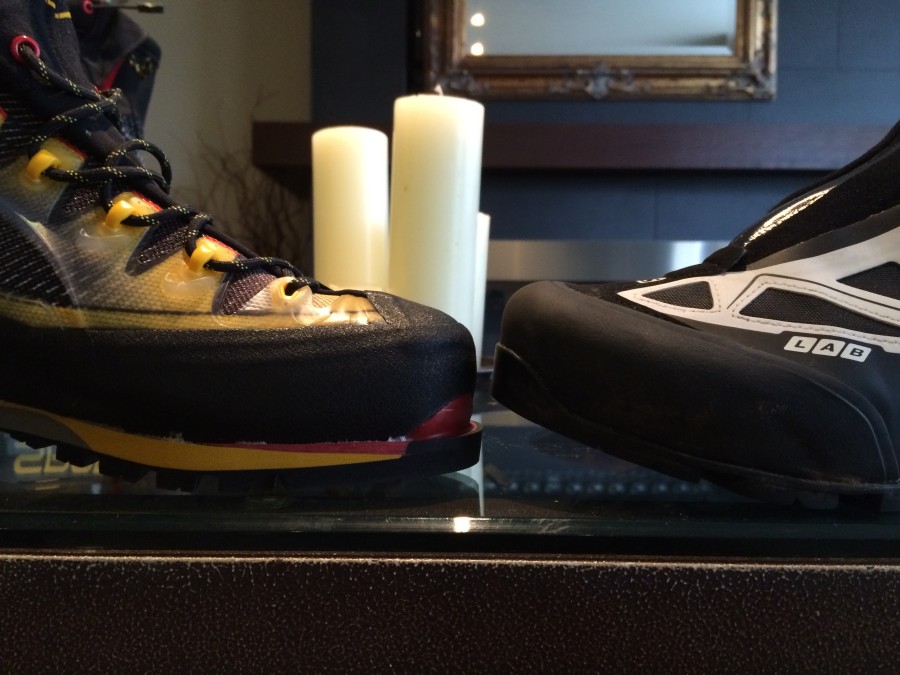 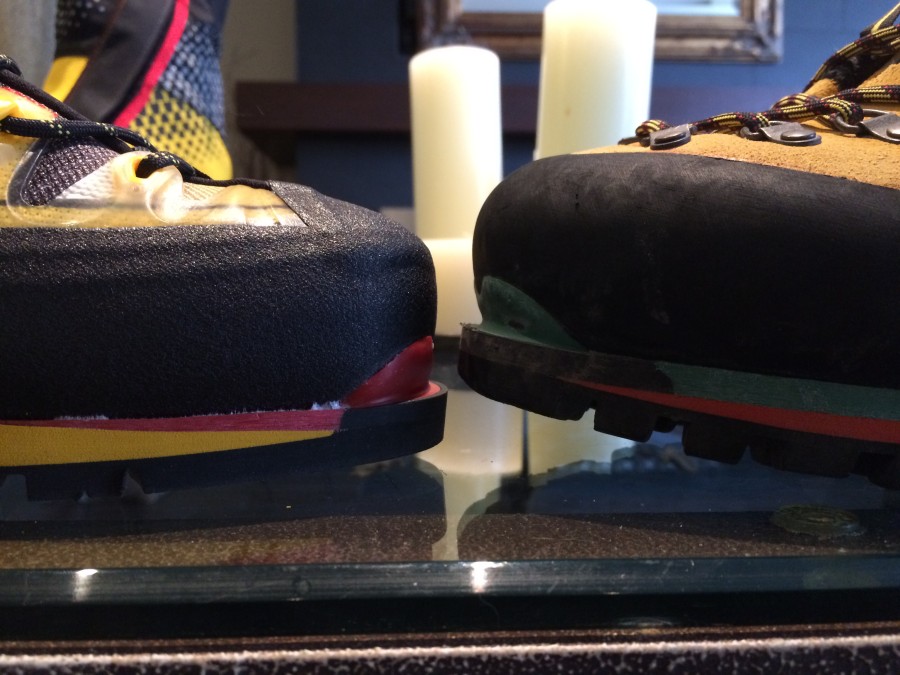 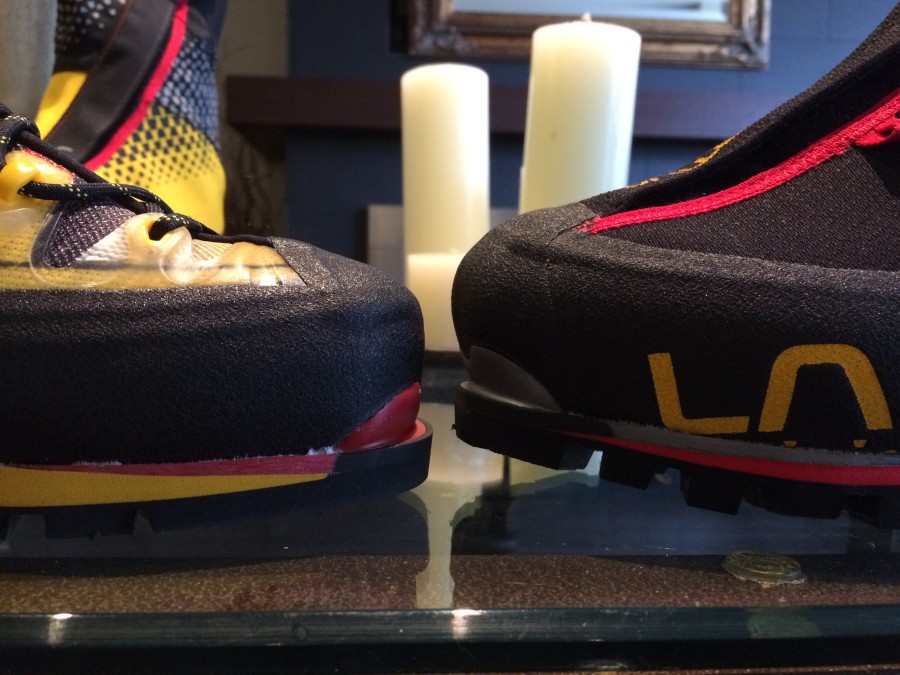 Impressed with the quality.

I know it doesn't look like it, but I have been on the fence with boots from La Sportiva. The Batura's were the first of the new generation of boots I got from them, now followed by the G2 SM's and these Trango Ice Cubes, which have pushed the boundaries of the Trango Cubes even further. I was using the Evo's as an all around boot, but was just getting tired of their weight. Throwing those things on the pack and humping them up to the snow line during the summer. It sucked. The Batura's seemed like too dainty of a princess to be slopping through the scree and non existent snow conditions of last year. Then, low and behold, La Sportiva comes out with the G2 SM and the new Trango Ice Cube. Yeah, I wanted to have them. While I feel that I could get rid of a few of the previous purchases, I won't. Each boot serves a purpose for the different conditions. These new Trango's are impressive. There was some minimal glue ick around the sole connection to the boot, but all and all, they are one of the best boots I have seen for quality and construction. They make the Salomon X alps look and feel like complete Chinese garbage. My first impressions of the Ice Cube was the stiffness and the lack of toe rocker. The stiffness is broadcast because of the lack of rocker. You start to walk and you are heel to tippy toe almost like a ski boot. Trying on the other boots while still keeping the Ice Cube on my right foot was interesting.. The Batura is a stiff boot and it has a similar feel of stiffness when walking in it. The Evo just initiates walking in it with it's rocker, as does the X Alp with even more rocker. You wouldn't think it would be a big deal until you start to stub the toe in your first few steps or going up any stairs. That extra 1/2" or so does make a bit of difference until your brain makes the correction. I was on the fence with getting the Trango, I called La Sportiva in Boulder and had a chance to speak with a Rep who has been in them this winter. The biggest concern we spoke about was the temps you could get away with wearing them in. He mentioned being stuck belaying and any standing around if there was any traffic jams on the mountain. Both great points he made. I asked him about warmth compared to the Nepal Evo's and he said they should be slightly warmer than the Evo's, though, La Sportiva doesn't have a temperature chart way to scale their boots to one another. That was really all I needed to hear. We also spoke about adding a -40 Below overboot with them, he thought that would be a great option to get more usability out of them throughout the year. When I called -40 Below I had a chance to speak with the owner there. He suggested either the Penguin or the K2 overboot. I am going to go with the K2, I will just use them as my gaiter and have extra warmth if things get cold and the snow deepens. The only things I can come up with that could be construed as a negative about the boots.. The lack of a pull loop on the heel for assisting in getting your foot into the boot and the lack of any toe rocker. The later, might not be an issue at all. The boot itself is seamless. The quality is amazing and the weight is going to be heaven climbing in. It is really making me think about getting a pair of Trango Cubes when the Salomon X Alps bite it. From what I have written above.. Is it the boot that someone should get over purchasing a Nepal Evo? My feet haven't gotten cold on Rainer in the Evo's. If these are comparably as warm and you add an overboot if needed.. The only downside I can think of is that they aren't the tank of a boot that the Evo's are, which take a beating and just keep going. Calling the Evo's a tank of a boot also seems funny. A few years ago they were the lighter option for mountaineering during the summer over using the heavy plastic boots. Times are a changing and these lighter boots are super cool options to be able to choose from. I never thought I would have a quiver of boots to choose from. 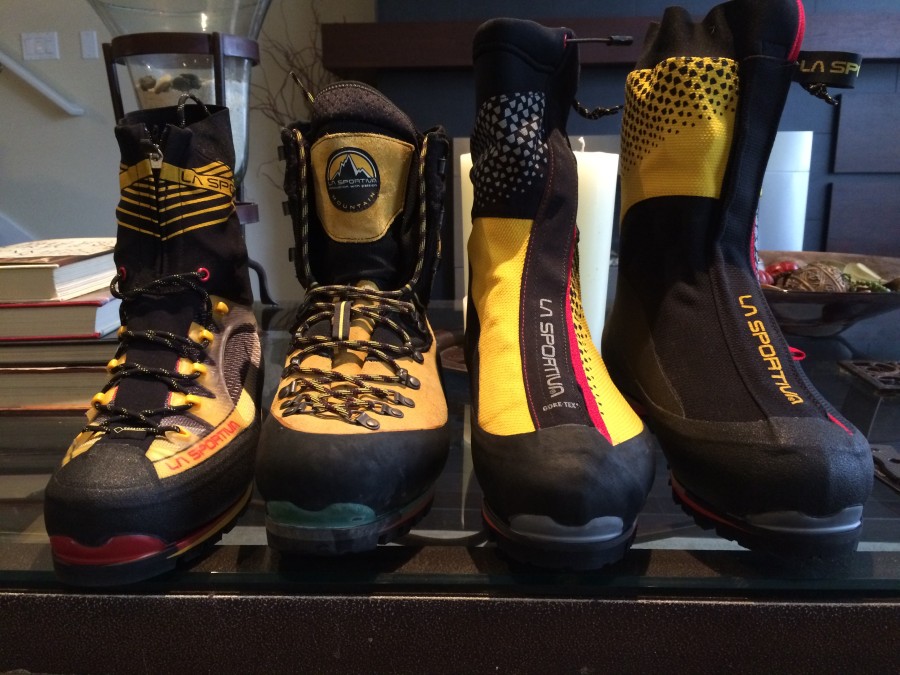 Thank you for your review! very useful! Could you give me an idea of how they fit? Is more for narrow or wide feet? I had the Baturas Evo and worked fine. But I really am on the wide side, and with a narrow boot I'll have a hard time. Thanks!

Hey Robert, I will agree that they are slightly on the narrow side compared to the other boots I own from La Sportiva. But just slightly. I have a wide toe area and I have gone up a 1/2 size in all my boots from them. I have been wearing them more lately trying to break them in for our June Rainier climb. The thing that is weird about them is the lack of rocker. It makes for a weird walking gate.

Used them on Rainier with the Snaggletooth crampons. We were standing around for hours in the snow on the lower mountain and I never had cold feet. If anything, my feet were sweating like pigs. When I knew the temps were going to be in the sub zero range I did switch over to the Batura boots for our summit climb. Even then my toes got a little chilled with how cold it was. I did bring the K2 overboots, but just figured I didn't want to mess with them in the dark on the way up. I will be using them throughout the summer on Hood, Baker and Rainier again.

Thank you for you review. I am going to climb Mont Blanc and considering Trango but every review I read they talks about ice climbing. There are no ice climbing to summit Mont Blanc. From Chamonix, first 50 % is hiking and scrambling without any snow and the second 50 % to the top is snow and sharp uphill. I wonder if Trango is right boots for Mont Blanc. It sounds like Trango is specially built for ice climbing. Am I right?

does this thing accept automatic crampons with toe bails.

Sure does! If you have anymore questions please contact me directly via email or my direct line.