While Zipp has long held a stellar reputation for churning out aerodynamic wheels, you may be less familiar with the fact that this company also makes tires. First introduced in 2007, Zipp's tires were originally laser focused on aerodynamics, which left a bit to be desired in the rolling resistance and handling categories. With the Tangente line, Zipp's focus has shifted to creating fast-rolling tires with supple grip to rail corners. The Tangente Speed R28 Clincher Tire boasts exceptional traction in both dry and wet conditions and a wide profile to roll smoothly over rough roads.

Billed as a race-ready tire for days when the road isn't pristine, the Speed R28 utilizes a plush 220 TPI nylon casing and a beefy 28mm width to soak up the bumps. The wider stance allows for lower tire pressure and an increased contact patch, which pairs with the lower rolling resistance of the high TPI casing for a better grip and an overall smoother ride than narrower tires. To cap things off, Zipp incorporates a tread pattern designed to shed water and maintain grip even in wet conditions.

I only have about 300 miles on these tires, so this is not a long term review. So far, they have been very good in dry conditions, and also good on a few wet rides. I have not done any high speed cornering in the wet, so I have no opinion there. They seem narrow compared to other 28c tires. They are smooth and comfortable, and show little sign of wear so far. Time will tell....

I picked these up because they were $19 a tire for 28c and good TPI. My go to are Vittoria Corsa (fantastic tires - all versions) which I generally wait for them to go on sale for about $40-50 a tire (harder to find in the 28c recently, especially in tubeless). Picked these up in the meantime and to hopefully save some $ Long story short these are NOT good tires. My main reason is they squirm like hell on slightly damp roads even when you break them in (after a couple rides). They also wear through just as fast as something like a TT tire but don’t offer the traction. I think a lot of reviews are based on “feel” when cornering, etc. but these will literally slip when pedaling out of the saddle on a damp road. I ride over the GGB daily in San Francisco and the bridge is typically damp from fog and these things are deadly, lol (but not funny...) If you ride on VERY pristine, dry roads then these could be a good choice as they are on DEEP discount. But like other reviews, just get the more expensive tires (Corsas or GP5000). I do around 200 miles a week so tire price matters since I wear through them quite fast....but these weren’t worth it Hope this helps

Got about 300 miles before a flat due to a puncture that went through the rubber on my first tire. Got 1,000 on my second before it flattened out and needed replacing (it was mounted on the rear wheel and I'm 215 pounds). That's to be expected from super soft tires built for speed. I recommend, especially for the price.

Great for the price, smooth rolling

Have around 700 miles on these so far and am quite pleased. Easy to install, ride smooth, and seem to have really good grip. Had one puncture, by a sharp thorn that worked it's way through. Can't fault the tire too much on that - was riding before sunrise and didn't notice a dry blackberry branch before I rode over it. If it had been lighter out or I had the thought to turn my front light downward to check I probably would have seen the thorn and taken it out before it got through to the tube. As it was, the leak was so slow I made it a good 10+ miles before the pressure was low enough to notice, and likely could have finished the last 7ish miles of the ride and been ok, but changed the tube anyway to be safe. Have ridden over a lot of broken, chipped pavement and even some potholes but the tires have held up well. They wear is getting noticeable so I'll rotate them soon. Don't know what it is about me, but I'm lucky to get 2k miles on a set of tires, so these are about on par with most other tires I've used (mostly Conti, Michelin, Schwalbe, and Bontrager) durability-wise. There are some small cuts in the tread, but nothing horrible and not worse at this mileage than previous tires. Decided on these since I had the Zipp Tangente Course r30's previously on my CX/commuter bike and really liked them, so wanted to try these out on my new road build, especially given the price. The Speed's don't have the puncture protection of the Course's, but are supposed to be faster rolling. I was able to just barely squeeze a Course r30 onto the rear wheel of my road bike, but the fork woudn't allow one on the front, so can't totally compare as far as how fast they roll, but the Speed's do feel a bit smoother, even though they're smaller. These should last me through the end of the season so I may pick up a couple more of these now so I have some ready for next spring. Edit - 9/28: a sharp piece of glass got through my rear tire last night, put a 2-3mm cut into the tread. Swapped tubes and finished the ride, but when I got home I noticed the tire was bulging a bit at the cut. Didn't want to tempt getting a blowout so tossed it and threw on one of the R30's so I could ride into work today on my nicer bike (getting to the time of year where sunny days will become more rare, so want to take advantage when we get them!). Putting on the R30, the difference in tread thickness between that and the R28 was stark; really shows that the "speed" version is more of a raceday tire. However, for the price I'm still quite impressed how the R28's ride, so went ahead and ordered a couple more while they're still available. Was thinking of trying the new-ish Conti Ultra Sport 3's, since the folding version can be found at a very similar price, but I've beat up my hands pretty good just trying to mount the Ultra Sport 2's in the past and these Zipp's are about the easiest tires I've tried while still being snug enough to not be afraid they'll immediately come off when punctured.

I got these because they were on sale and I wanted to see if 28's would fit on my bike. The sidewall blew out after about 200 miles of smooth roads. It could have put me in the hospital. These tires should not be on the market. 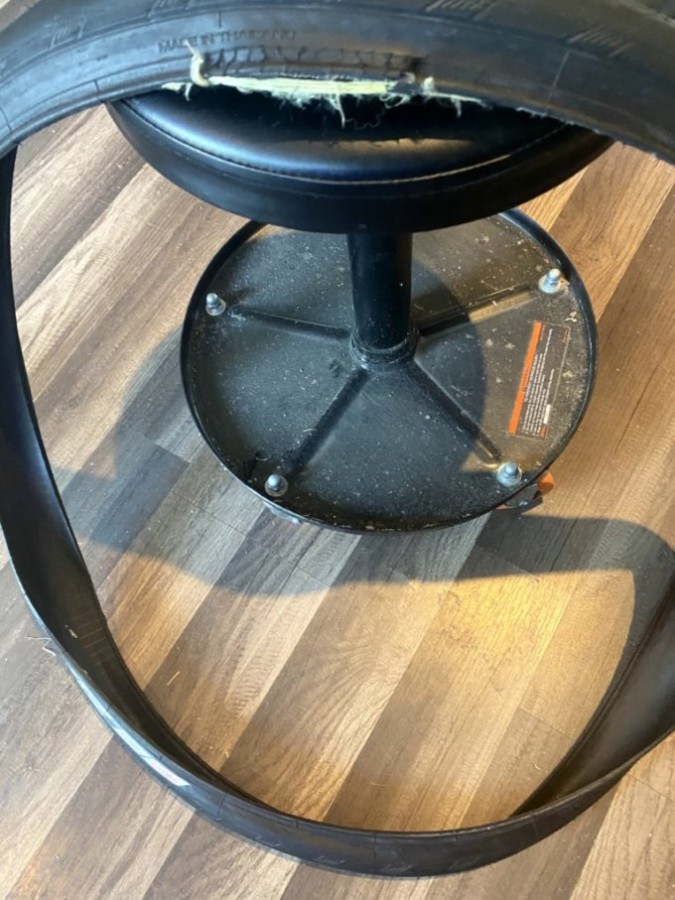 I used this tire one time, and made it about 6 miles before the sidewall suffered a tear causing a huge blowout. I'm honestly not sure what tore the side wall, seeing as this happened on a fairly smoothly paved bike path. It's possible the tear started earlier in the ride, gradually becoming worse and rendering the increasingly exposed tube a ticking time bomb. The tire was inflated to 95 PSI prior to the ride (max indicated pressure is 100 PSI). The side wall is simply too thin, and bike tire rolling resistance website unsurprisingly reflects that it is only 0.45 mm thick. Don't get me wrong, these tires are nice in their way --- very easy to put on, and I felt that they had good traction and rolling resistance during the short time I used them. However, these just are not fit for use on anything except velodromes or the very smoothest of roads. There is a reason competitive cyclist is selling them for ~65% off....Don't get lured in; Do yourself a huge favor and opt for some continentals.

I mounted these on Zipp 404 Firestrikes, have not tried on 202's or 303's yet. No tire is going to get 5 stars in all dimensions. My favorite is still the Schwalbe One but unfortunately Competitive Cyclist doesn't keep a reliable supply in stock. I ride high miles over a wide range of road quality and have found that 28's are as fast or faster than 25's, ride better on chip seal and broken tarmac/occasional gravel, and I like the extra rubber on the road, especially in the wet. These R28's seem to be what they are advertised to be, as fast as the Schwalbe One, grip is excellent, ride quality is excellent, durability we'll see after I've put a couple thousand km on them. Handling is just as precise as with 25's if you've got them inflated properly and they are very predictable, no issues there, 5 stars. They mounted up well on my Zipp's without levers.

Are these a foldable tire

Is this a tubeless tire?