Can't wait? Consider one of the other Alpine Touring Bindings we have in stock.

Take a walk on the freeride side.

Sure, the Black Diamond Fritschi Diamir Freeride Pro 108mm Binding has a touring mode, but that shouldn't lead you to assume that it sacrifices anything in the way of downhill performance. This is a wide, burly touring binding for powerful skiers who seek technical lines far away from the resort. Robust materials mean ultimate durability, a clever linkage design transmits all your power directly to the ski, and a dialed release system protects you against disastrous early-release scenarios.

More specifically, though, this binding features Gliding Technology—complete with a wider toe piece—to alleviate that pesky walking-on-your-tip-toes sensation. Not to mention, the Fritschi touts a free-gliding heel bar with integrated lock to avert an accidental release into tour mode. Ultimately, the wide footprint and heel piece boasts an overall larger construction than past years' models, ensuring a more forceful, powerful, and stable platform when driving wide skis. So, glide quickly on the skin track and then push this burly binding until your speed leaves you hooting and hollering with all the carefree, joyous abandon of a child.

Best model of the series

I have used the Fritschi AT Feeride bindings on my last four pairs of skiis. For each model they have been slightly improved for stoutness and durability. The current black, white and tan series called the Freeride Pro is the best so far. Still a imid-weight AT binding , weighing in half way between the side country AT bindings of other manufacturers and the lighter

I have toured/back country skied/resort skied on these bindings the past 3 seasons and have more than 300 days on them. They have never broken, or made me wary of their design or construction. Since I originally purchased them, many other brands have come into the Randonee/AT realm. With that said, I'm happy with their ability to be reliable and they downhill ski much better than tech-type bindings (when it comes to ski-retention from drops...etc), which are dedicated for touring. As I just purchased some new skis for the upcoming winter season here in Utah, I'm going to be getting another set of Fritschi's Diamir Pro model and am excited for it to start snowing again.

I have broken two pairs

I have broken two pairs of bindings in my 30+ years of skiing - both have been Freeride Pros. First the toe plate sheared in two pieces on my way out to a multi-day hut trip. Fritchi was great about warranty, and sent me a brand new pair. This last weekend the entire toe piece broke off of the all plastic (!) post that it is attached to. I won't be pursuing a warranty replacement this time. Even at free, these bindings aren't worth it.

They broke after a while

I through up a review of these on the page for the 120mm model, but it would apply to the 108mm model equally so I will link to that review here: http://www.backcountry.com/black-diamond-fritschi-diamir-freeride-pro-binding-120mm To sum up though, they broke. 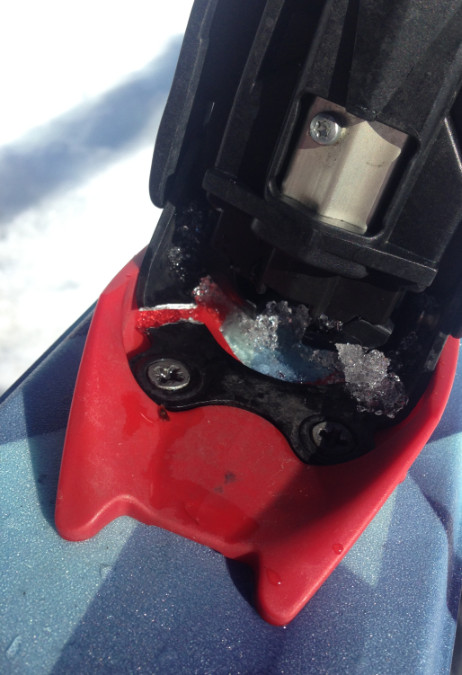 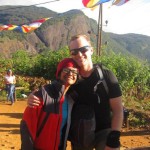 Same exact problem. They told me it was my fault :( It was a loooong hike

This binding takes a lot of flak for no reason other than that it's not the best at any one thing. Markers may ski better, but they're noticeably heavier. Dynafits are lighter but can't take the abuse of in-bounds skiing. This binding sits right in between... plenty sturdy enough to handle heavy use at the resort but they aren't going to kill you on the uphill. And contrary to popular belief, they ski just fine... 99% of the skiing populace wouldn't notice a difference between this and their regular alpine binding underfoot. They stand a little taller off the ground but it's hardly noticeable when you're actually skiing. But of course, why would anyone blame their shitty technique when they can blame their gear instead? So, who should buy this binding? Anyone that wants an AT ski that can do it all, resort or backcountry. In an ideal world, we would all have a ski/binding setup to handle every possible scenario but some times you have to compromise. Be honest with yourself, if touring will make up less than 25% of your season, then don't waste your money on a fancy Dynafit setup that will spend more time in your closet than under your feet. FYI: I currently have this binding mounted to a pair of K2 Sidestashes, 181cm. I'm 5'8", 185lbs, and have never had a pre-release that wasn't my own damn fault. Approx. 60 days on this set up, 50/50 resort vs. backcountry.

Functional but better designs out there

I had the previous model of this binding, no issues with durability but not a great touring binding. For one it is heavy but worse yet you are picking up the weight of the majority of the binding when you are you picking up your heel to glide. At first the weight isn't bothersome but after awhile your buddy's dynafits on the way to the summit of Rainier look better, and better.... Also they accumulate alot of snow buildup when touring through powder. They definitely look like a good conventional downhill binding, but I have found my Dynafit's ski down hill better and I'm a fairly aggressive, powerful skier (190lbs). 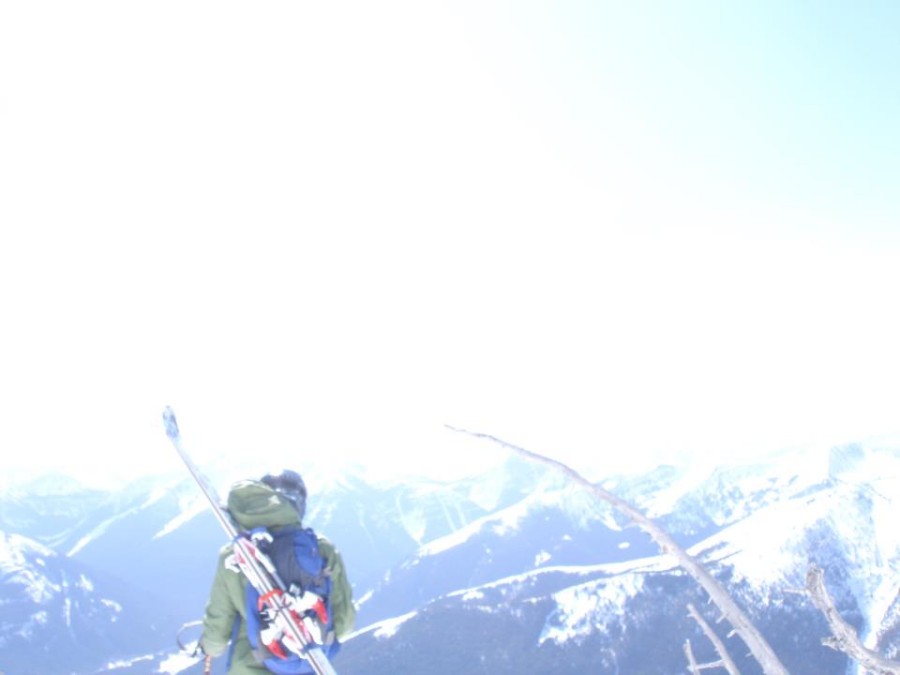 There are two ways to review these: Review them, review them vs. Dynafit. Review: These are fully functional, they work great, I never had a problem with them. Review vs. Dynafit: When you can purchase the Dynafit Speed Radical for the same price, you'd be crazy to go with Fritschi. Almost every touring boot made now is Dynafit compatible. Fritschis are clunky, loud (clack-clack-clack-clack), heavier, harder to maneuver on tricky ascents, and don't offer the top-of-the-line stability that Dynafit offers. What it comes down to: I don't think these bindings, though totally functional, are worth anywhere near their price point.

I have these mounted on Black Diamond Zealots and they work well. I've been touring with them a few times and they're quite a bit heavier than a dedicated touring binding, but fill a niche for someone who wants one setup for inbounds and backcountry skiing.

Can you get new brakes and change them to accomadate a larger width ski?

Check out the Black Diamond Fritschi Diamir Ski Brakes (Item # BLD1242). They come in a 120 mm size to accommodate a wider ski. Feel free to shoot me any questions about Black Diamond or other ski bindings: klivingston@backcountry.com 801-736-4337

will these bindings work with the scarpa...

will these bindings work with the scarpa maestrale rs boots?

They will. Just be sure to adjust the toe height to accommodate the rockered sole properly.

how do i know when the toe height is adjusted properly?

If you aren't a certified ski technician then you shouldn't mount the bindings yourself. Better to have a 500 dollar binding mounted right on your skis. If you know how to do ski mounting, then do you have a toe mounting plate? Put it under the toe of your boot and screw down the toe adjustment screw until the plate is tight and still able to remove. If you aren't sure of how to do this I would recommend you to take it to a ski ship that has ski techs certified to mount black diamond bindings. I am a certified ski technician in the East.

Hey I was thinking of mounting these on...

Hey I was thinking of mounting these on the Black Diamond Amperage. These would be my resort/touring ski and I was wondering how they would hold up as both?

How are these for in-bounds skiing? I...

How are these for in-bounds skiing? I have the original fritschi's but don't feel as comfortable on them in bounds. Have these been upgraded and are beefier for inbounds skiing? I have a sidecounty setup already - trying to decide what to mount on new Katanas. Or would you recommend a downhill binding like the Marker Jester Pro?

I've skied the Freride Plus bindings on 183 Volkl Gotamas (106 waist) for several seasons for everything from euro-ice to bumps to groomer laps to deep powder with lots of side country and have found them to be the best bindings I have ever used period (after decades of Marker , Look, etc., etc.) -just for general skiing - even without the AT advantages. I have actually had two sets of Marker's best break on me. I now have the Freeride Pros on Line SFB 115's and they are even better than the plus... I'm an athletic 6-2 and 175 lb, level 8-9 skier. I'm sanely aggressive and like steeps but not death-inviting stuff, and I don't huck cliffs or do park tricks. I ski about 30 days per year, so if you're one of the lucky 100+ day guys, you probably wear your gear out alot faster than I do, so YMMV. One other thought - I ski Garmont Endorphin boots size 27.5 and use the short version of the Fritschis. If you have the long size range, they might not be quite as rigid, but mine are rock solid.