In bounds, out bounds.... Armada's Shift MNC 13 Ski Binding knows no bounds. It's choice for skiers who'll ride dawn patrols in the backcountry and reach the resort in time for first chair. There are only a few ski bindings like this one that can shift from standard alpine boots to tech-fitted backcountry boots. In fact, it requires tech boots for the skin up, and an alpine toe is necessary for the downhill. Multi Norm Certified, this binding's toe height adjusts to accommodate standard alpine, WTR, tech, AT, and GripWalk soles. In alpine mode, the Shift provides reliable DIN release ratings as well as a sliding toe pedal with elastic travel to release when necessary, and still retain some rigidity when you're laying down a fierce line.The Shift requires you skin in tech mode. Simply flick switches on both the toe and heel pieces to engage the toe's pins and activate the heel's walk mode. In walk mode, the Shift's pins provide the same walking stride and touring efficiency as any tech binding. There are two heel risers to assist with the skin track's steeper sections. Made with carbon, the Shift only weighs a mere two pounds, which isn't as light as ultralight tech bindings, but they're certainly lighter than alpine touring bindings and those hybrids with DIN heels and tech toes. After reaching the top of the skin track, you can flick those same switches on the toe and heel pieces to clip back into the binding like it was a regular alpine binding. The toe piece's 47mm elastic travel gives this binding a rugged DIN rating of thirteen, so feel free to ride the backcountry as rowdy as you'd ride the resort, knowing full well that you can release safely when you fall.
Learn more

I purchased this binding wanting it to be my one quiver set of skis & bindings for AT skiing. I used the bindings three times to go uphill, then the brake on one of them started to fall down while going uphill. I took them to my local ski shop that installed them and they said the one that's giving me problems is significantly weaker than the other one. Since I purchased them online they couldn't warranty them. So I started to use the rubber bands I use for waxing to hold up the brake while going up hill. I do like the bindings but can't recommend them to anyone else 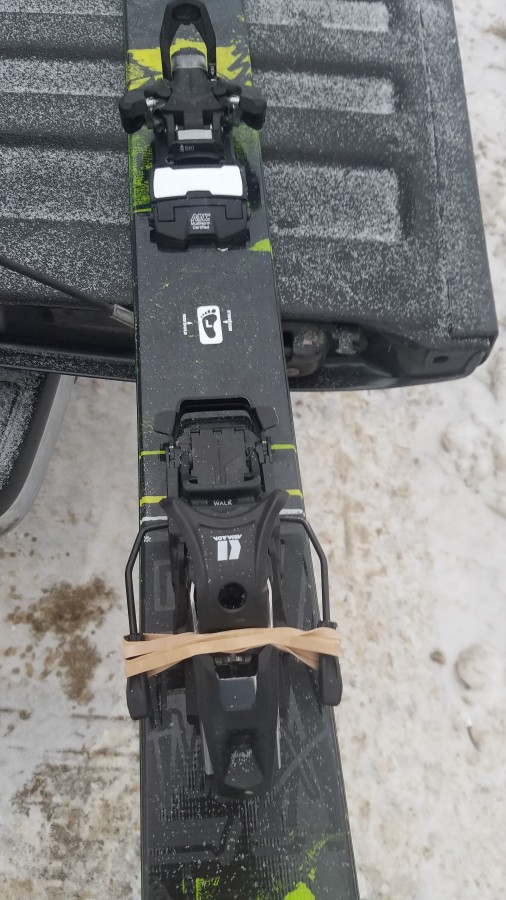 What a time to be alive

If you're looking at these bindings you're probably the kind of skier who likes to earn their turns, but ideally with minimal sacrifice in downhill performance. We've been through all kinds of solutions in the last decade... carrying skis on our back while snowshoeing, using alpine trekkers with heavy alpine bindings and boots without walk modes, and then on the other end using super light tech bindings and squishy alpine touring specific boots. Tech bindings themselves have come a long way and are an incredible option. But the Shift binding is a step further for those who want the feel of a frame binding (more elasticity, broader point of contact on boot) and who might want to use the same pair of skis with some alpine boots that do not have tech fittings. I used the Shifts all last season, and they are the best evolution yet in my opinion for that middle ground user. I would definitely still recommend tech bindings if you are going strictly backcountry and want to do big vertical, but if you can stomach a weight penalty these bindings really do give you a better alpine feel that let's me have just a little more fun out there. And a huge plus to me is that I can take the same pair of skis to a resort day and can use my alpine boots with the same bindings. The pair I used last year was the Atomic version in black and white. Those are sweet too (they are identical mechanically), but also excited to see Armada brought us a murdered out version here which I bought for my new pair of skis this season. If you're comparing these to a full frame touring binding like the Duke or to a alpine trekker set up, this is a must-have IMO. If you're comparing these to a tech option like the radical FT, then it's more of a personal decision based on how/where you'll be using them. In my opinion the Shifts do live up to the hype and are incredible, but for some people the benefits won't outweigh the uphill penalty and tech bindings will be the way to go.

Are these bindings compatible with my Scarpa boots? Currently I have Dynafit bindings. Thank you.

Can I use my normal alpine boots for both skinning and downhill?