Why We Like The Speedcross 5 Wide Trail Running Shoe

It's no secret that Salomon's trail shoes tend to run a little narrow, so even though the newest edition of their famous Speedcross trail running shoe is wider than its predecessors, the wide-footed runners with trust issues among us can turn to the Speedcross 5 Wide Trail Running Shoe for a fit that gives their feet comfort on technical trails.

The outsole of this shoe has been updated with deeper and more generously spaced lugs, giving you greater traction in soft and loose conditions like mud and snow. The softer and tackier rubber is also ideal for grip in soft conditions, and the unique heel-unit design of the midsole provides greater stability for those times when you're worried about slipping out as you wind your way down muddy switchbacks. The forefoot stays plenty flexible too, so you can really dig into steep trails as your toes splay out comfortably and you kick things into high gear.

Two gripes with Salomom shoes. 1 there arent many places that carry them and even less carry the full line, so you're stuck ordering online in a lot of cases. Which brings me to gripe 2. The sizing is just a little different. I ordered the SC5 as my 3rd paid of Salomon shoes. Each one is a way different fit and size. I have an 11.5, 12 and a 12 wide now. Which brings me to gripe about Backcountry. Really, 8 bucks to ship them back when they don't fit? Come on guys, its 2020. Get with the program. Its not like you are selling these at a discount over other retailers who do offer free returns.

Familiarity:
I returned this product before using it
Fit:
Runs small

Downgrade from the Speedcross 4

I have owned three pairs of the Speedcross 4 and was excited that Salomon was releasing the Speedcross 5. I consider the Speedcross line to be great but flawed. I was hoping the 5 would be a little better than the 4 and I bought a pair as soon as it was time for new shoes. The grip in mud and soft terrain is fantastic, especially when dealing with inclined terrain, for both the 4s and the 5s. The two issues I had with the 4s were the insoles and the quicklace - lace pocket. The insoles, while generally comfortable when wearing, will bunch up in the toes when the shoes get inundated with water (yes, my shoes were the right size). People buy these shoes to negotiate muddy terrain so if using them correctly they will get inundated with water at some point. When they would bunch up I would have to take them off, adjust the insoles, and then hope the problem didn't come back (it always did). I found this problem fairly easy to overcome by using shoe goo (or flex glue) to affix the insoles firmly in place. By the time I bought my 3rd pair SC4s I was gluing the insoles down before taking them for a run or a hike. A good gluing would typically last 2-3 months before having to repeat. The issue with the quicklace - lace pocket was that it was made of a thin mesh that would typically rip after a few outings in rough terrain/vegetation. Without fail, the quicklace would then escape the pocket thru the rip/hole and become a nuisance, forcing me to stop to adjust (see photo). Duct tape or tent repair tape were temporary solutions however I hoped that Salomon would replace the thin mesh with a ripstop nylon or something similar with the 5s. In fact, if the pocket was made out of the same material as the ripstop upper on the 4s it would have been perfect. So the 5s. The new tread pattern is good. I would say the 4s were a 95/100 and the 5s are 96/100 on tread grip. There was however no improvement in the insole or quiklace - lace pocket situation. Glue to the rescue for the insoles, no problem. The material on the lace pocket seems even less durable than the 4s and the upper as a whole seems to be made out of a different material than the 4s. This new material has added a new problem, the shoes do not drain well. The complications of this are obvious. In short, the 5s are not as good as the 4s. After two outings the Salomon tab on the tongue ripped as well (see photo). It may be worth noting that the 4s were made in Vietnam and the 5s are made in China so they are definitely being made in a different factory. All that said the Speedcross is still great. When it comes to running and hiking up and down muddy ridges and thru gulches, the Speedcrosses are ideal. Both the 4s and 5s are amazing when moving downhill on steep inclines. My recommendation would be to buy the 4s if you can still find them. I just bought another pair of 4 wides but I can tell the inventories are starting dry up. I would probably buy the 5s again if I had to, knowing that I would have to glue insoles and apply duct tape. I may try other laces and possibly putting in my own drain holes. I hope the 6s fix some of the above problems and that is why I wasted a half hour writing this review on a website I think Salomon would pay attention to. Happy trails! 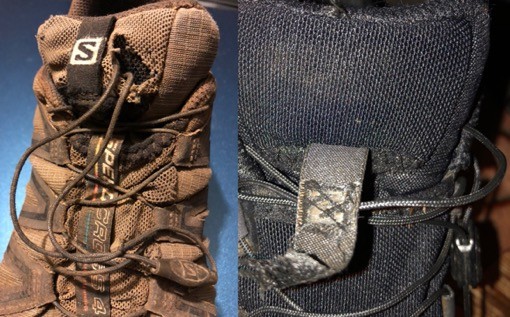