Hot forged with DMM's I-Beam Technology, the Shadow Carabiner gives you a solid blend of low weight and high strength for any climbing pursuit. The hooded nose eliminates snagging on ropes or bolts and makes racking gear a breeze. A deep interior shape guides the rope to the strongest part of the biner, while the anodized finish prevents corrosion over the years.

Due to its relatively low weight, the Shadow gives you the edge when onsight sport climbing. This also means the Shadow is good for sport climbers who occasionally go trad climbing but don’t want a second set of quickdraws Areas where the Shadow hangs on bolts have been reinforced with extra metal to resist bolt damage. A clean nose reduces snagging and makes stripping steep routes easier, improving security and functionality The Shadow’s straight gate features thumb grips that make it easier to open, while its broad base gives plenty of room for racking gear. 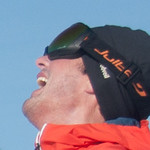 Awesome design and functionality. This Paris with the straight gate version on my alpine draws. Easy to use and light enough to make a difference when on those long days.

Nice and light without being too expensive. I use this for my alpine draws and they work wonderfully. Simple and snappy

MUCH easier to unclip with the clean nose design. I use the straight gate version for the top biner on all of my quick draws.

These are great no-nonsense key nose carabiners. They're not the lightest thing out there, but they're not heavy either. I like them for racking nuts and gear. They work well on quickdraws as well. Good solid gate action right were I like it, not too stiff, not to easy.