The Zipp SL Speed Seatpost has taken Zipp engineering a step further, and the result is a seatpost that is 48 grams lighter than the Service Course, but with the same durability. The SL Speed features the same adjustable, low-profile clamp system as is popular on the Service Course. It is a two-bolt system that provides adjustment both fore and aft and in the tilt of your saddle. You’ll also notice that the lower portion of the clamp is beefier than other seatposts on the market. This provides extra support for those riders who prefer a more rearward position.

Meanwhile, the SL Speed uses carbon fiber for the construction of the post, which keeps the weight of the post under 175 grams and also gives you a ride that dampens road vibration and chatter. While many carbon posts feature a low maximum rider weight, the maximum weight for the SL Speed is 300lbs. The saddle sits on carbon and titanium rails for performance longevity and additional vibration dampening.

At first I was really disappointed with this seat post. On my first ride with my 2020 stump jumper evo the seat came undone. I installed it correctly with the correct torque. What I noticed was that the adjustment bolt kept loosening. PRO TIP: add blue locktite to the bolt. Use an actual torque wrench and tighten to 12 nm. After doing this it has been rock solid. The seat post is beautifully crafted and extremely light weight. The matte finish is a nice touch as well. Adjustment is extremely easy. I would not hesitate to buy this post again. 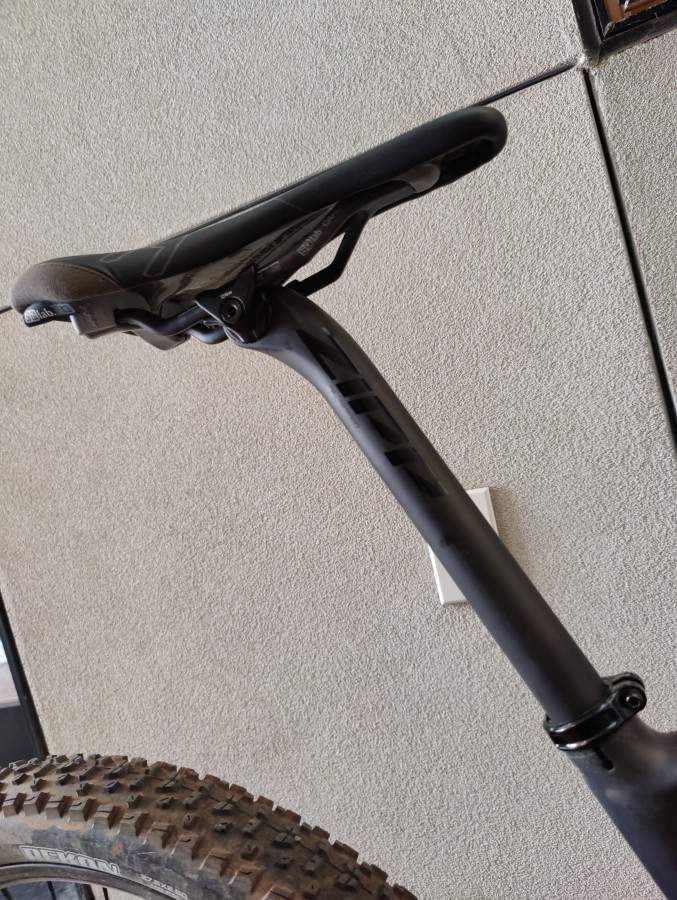 Just a gorgeous piece of carbon. The seat binder bolt was super easy to use. Looks just ace.

Replaced my Sytance carbon post with this one for more setback. The Zipp isn't as comfortable as the Syntace, but it looks amazing and provides the position I needed. I have a few hundred miles on it and have experienced no issues whatsoever with the clamp or post slippage in the frame.

This is a nice looking, lightweight seatpost...but the single-bolt clamp for the saddle rails gave me some problems initially. It relies on the tension of the single bolt to create enough frictional force between the round clamp pieces to resist rotation under your weight, in addition to securing the rails fore/aft. Initially, on the first few rides, the tilt angle kept changing due to slippage. I finally got it to stay put by torquing it extra tightly, and then re-torquing after each ride. The opposing clamp pieces have to move both in (to secure angle) and down (to secure the rails), so to simplify the discussion I think it needed to work itself into place in order to cinch correctly. So far it has stayed put the last few rides, fortunately. So for looks and weight it's 5 stars, but overall the single-bolt clamp design is just not as stable as their 2-bolt Service Course clamp design.

I like to read reviews on online products but it`s good to keep them in perspective, and after reading the 1 star review I almost did not buy one of these beautiful seat posts which in my case matches my SL Speed stem so here is my 2 bits. I took it out of the packaging it looked super cool and exactly what I wanted, then I put the post on the frame and now I`m getting excited, I studied the seat binder parts trying to predict where this is going to go bad and finally said heck with it and installed the seat on the post (7X9 carbon rails)... finished.. The end result?.. Gorgeous, very lite, very trick, EZ to install, I rode 25 miles yesterday and when I got home I stared at it for a minute and felt pretty great about the whole thing..

The design of the new saddle rail retention system is so bad that it flies right past aggravating and straight toward rage inducing. Regardless of the amount of grease used on the metal contact points (which, by the way, is woefully inadequate as it comes shipped) the design is such that the metal pieces attempt to gall together resulting in a completely useless, non adjustable, and ineffective product. Having spent several years in bike shops, and many more around them and around bikes I though that the original ENVE ver. 1 was the worst post of all the time, I have been proven wrong. I hope for Zipp's sake that this was a quality control issue in their Taiwanese facility and not their idea of a professional product worth the asking price of $265. Awful.

Zipp, undeniably, one of the very best carbon road wheelset makers​ in the world... has quietly become one of the very best makers of carbon cockpit components. The Zipp SL Speed carbon seatpost does not disappoint. It is expensive. It is gorgeous. It is fantastic. You get what you pay for. Super light, super strong, lessens low vibration chatter... and dead sexy in matte carbon black. American company/design. Cool. Install note: If you own a carbon bike frame... and you probably do if you're looking at this seatpost... then you must use grip paste to set your seatpost. I highly recommend "Finish Line" grip paste ($7/tube) -better than Park's. Tighten this carbon post to spec using a quality torque wrench or one of Park's cool new torque keys ($45). Don't over tighten! And you don't need to if you use grip paste and a torque wrench/key.

Even with carbon paste I got vertical slippage between the seatpost and seat tube (titanium frame). I had to torque the seat clamp pretty tightly, more than the rated amount, to stop that. (This is in addition to the slippage at the seat clamp.)

2 Questions: 1) I need a seatpost with a slight forward offset. Can the 20 mm rear offset version be used turned around so it's 20 mm forward offset? 2) Re: question 1, if this seatpost can be turned around, is the angle of the saddle up/down infinitely adjustable? Many seatposts are such that once you turn them around it's impossible to adjust the seat angle so it's not pointing up way too much. Thanks for any answers that can be provided!