The bike industry has a habit of quickly making its best technology seem obsolete with each new product release, and while wheels with the current standard of bullet-nosed rims don't seem to be going anywhere, Zipp is stepping up with a decidedly different approach to the shape of aerodynamics. The Zipp 454 NSW Carbon Clincher Road Wheelset features a unique, variable rim shape inspired by majestic maritime Mammalia. The fearlessly innovative brand draws inspiration from the tubercles found on the edges of humpback whale fins for a rim profile that oscillates depth, a striking shape that Zipp claims of increases aerodynamic benefits and boosts the brand's already notable crosswind stability.

The most immediately obvious difference between the 454 and any other wheel is in the rim shape, whose depth varies between 58mm at its deepest point and 53mm at its shallowest in a series of wavy swells Zipp refers to as Hyperfoils. The overall design is known as SawTooth, which takes on a shape not dissimilar to the ABLC SawTooth dimple patterning found on the 404 NSW. These bumps, designated as Hyperfoils, are meant to mimic the nodes or tubercles found on the fins of humpback whales that manage water resistance and contribute to the massive animals' ability to swiftly maneuver despite their size. Compared to standard, consistent depth rims, Zipp claims that wind tunnel testing shows that this SawTooth design significantly reduces both side force and aerodynamic drag, which in combination should translate to more confident handling when riding on exposed roads in variable winds and an easier time pushing the pedals any given speed compared to even the 404 NSW.

The 454 NSW also marks a departure from Zipp's signature dimpling, upgrading the ABLC design to HexFin ABLC. The HexFin ABLC dimples take inspiration from their round predecessors' claimed ability to better manage the boundary layer of air against the rim, but Zipp tells us that the updated, hexagonal shape enjoys yet more of the stable aerodynamic benefits associated with the now-traditional round dimples. Further departing from the all-over dimpling of Zipp's other wheels, the 454's HexFin dimples are strategically placed in small, fin-shaped clumps above the deepest edge of each Hyperfoil, a collaboration that Zipp finds most efficiently manages airflow.

In combination with the SawTooth rim shaping, all these design changes mean that, in theory, this wheelset is ultimately faster than any other wheelset of similar depth that Zipp has made. If the 404 NSW—having dethroned its 404 Firestrike predecessor—was touted as the pinnacle of Zipp speed and stability, then the 454 appears poised to set yet a new bar for capable versatility. We haven't seen the raw wind tunnel data and we are in no way aerodynamicists, so it's prudent to take some of the above claims with a healthy grain of salt. However, with Zipp's race-bred history, it's a safe bet that these wheels at least match other high-end offerings. Whatever the case, one thing is for sure: The 454 NSW stands alone with an aesthetic that is guaranteed to garner attention at weekend club rides, coffee shop gatherings, and race venues alike.

While we're always excited about wind-taming benefits and improved stability, we're equally jazzed to see Zipp outfit the 454 NSW with its updated Showstopper brake track, which debuted on the 404 NSW. It's still imbued with the same silicon carbide particles as the original Showstopper, but the direction-specific grooves have increased in number and changed in depth. These tweaked grooves are credited with even more improvements in braking, and it stands to reason that the grooves help clear intervening material and moisture to keep the pads in better contact with the rims for more confident braking in both dry and wet conditions.

The original Showstopper netted some pretty impressive stopping across all conditions, but Zipp assures us that the new version is even better—and reviews across the industry appear to agree. The real world application of this increased stopping power is an ability to hold speed longer while approaching a corner and braking later to gain tiny increments of time with each bend or switchback. Additionally, you'll be able to stop reliably when unexpected obstacles such as a darting squirrel, inattentive motorists, or rocky debris on a fast canyon descent impose themselves on your line.

Zipp's Cognition hubset (also first seen on the 404 NSW) makes an appearance in the 454 NSW and is arguably as innovative as the rims. The Cognition is centered on Zipp's Axial Clutch freehub mechanism, which engages by way of two Metal Injection Molding (MIM) rings. One ring is mated to the freehub body and one mated to the hub body, and the two rings are machined like a ratchet, so they ramp off of each other while freewheeling but engage each other during pedal input.

Compared to a standard pawl design, which operates like a drum brake, the Axial Clutch's MIM rings engage laterally to reduce friction while freewheeling, so coasting doesn't negate watts already spent. We're familiar with this model, as we've seen similar mechanisms on the designer hubs featured in top-end custom builds for years now, but Zipp is the first to replace the usual tensioning agent (steel springs) with magnets. This substitution further reduces friction between the ratcheting rings, making for what may be the smoothest freewheel on any mass-produced hub set. It's a design that we suspect will eventually be the norm, but—as with innovations in rim shape—Zipp is leading the charge.

In a wheelset of this caliber, even the tiniest details are attended to. Acknowledging that sticker decals break up the clean surface of the rim and impact both aesthetics and aerodynamics, Zipp uses its ImPress graphics process for clean branding that blends seamlessly into the rim's surface. While the speed impact may be negligible, printing the logo directly on the rim eliminates unnecessary sticker edging and ensures that the dimples are unencumbered by imperfect sticker surfacing for a clean, fully integrated logo that won't peel or crack over time.

I know the jury is still out on these rims, however after upgrading from a old set of 404's I am impressed on how these feel and handle especially in cross winds. Are they worth the coin? Only you can answer that question, but I'm sold (obviously). 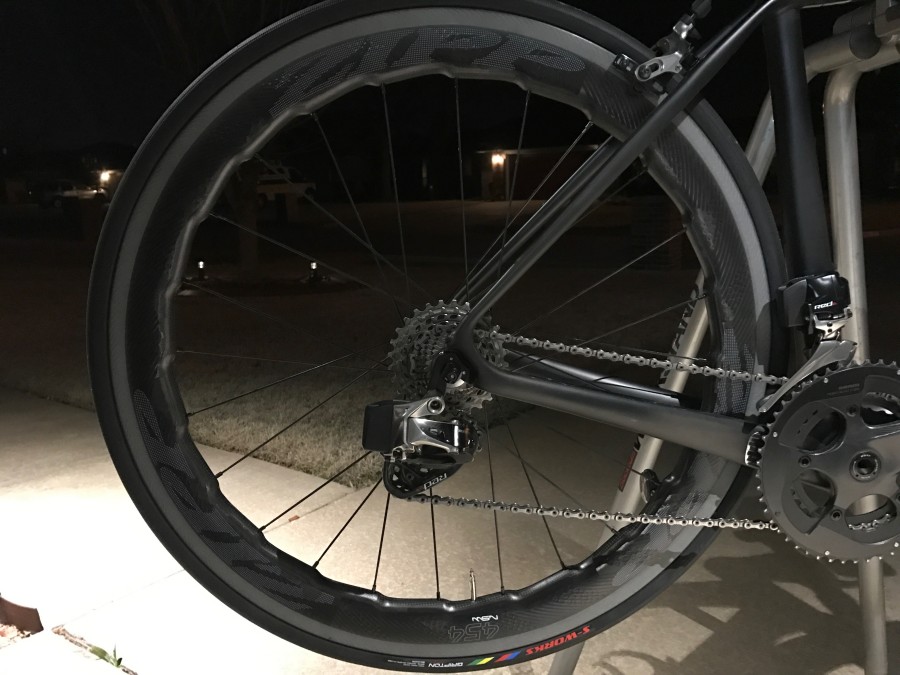