The Winston Carbon Handlebar is a performance carbon mustache bar that's compatible with road, mountain, and bar-end controls. It's tough enough to handle everything from long rides on the road to off-road expeditions, and it's comfortable in both the drop and riser positions for versatility.

Good bar but not for everyone

I give the bar itself 5* simply because from everything I can tell it is a very well made handlebar. The carbon fiber appears flawless. I originally wanted to put this on a mountain bike, but my cables wouldn't reach, and it just wasn't quit wide enough. I really like moustache style bars and this was the only carbon fiber bar on the market that I could find. I could get a nice titanium one, but that cost almost $400. I decided that since I wasn't happy with my old Soma Condor bars on my gravel bike, I'd throw this on for a try. First impression is that it both shortens and lengthens the cockpit. Because the bars come back so far, you can get pretty far back to ease some tension on the back. The curls end up being quite a bit forward of my previous bars. I may need to move my saddle up a 5-10mm to offset this some. Also, the bar is quite a bit wider than a traditional drop bar which has the effect of lengthening the cockpit, as well. As it stands, I can't get up forward on the bend well right now to to alternate my handholds to alleviate numbness. I mounted my brake levers about as far to the side as possible because that is how my mountain bike brake levers are situated. After the fact, I noticed on the Whiskey Part Co. web site they have a picture with the brakes installed where the pull is more 90 degrees to the front of the bike. I think that may work a little better than my set up. Manipulating drop bar brakes/gear shifters on the Winston is different. I'm not used to it, but it doesn't seem particularly difficult. I think with just a little time on the bike set up like this, it won't be an issue. The drop bars in the picture I added are plain FSA Gossamer 42 drop bars. I just threw them in for a comparison. I've only got about 40 miles on the bike in this configuration. 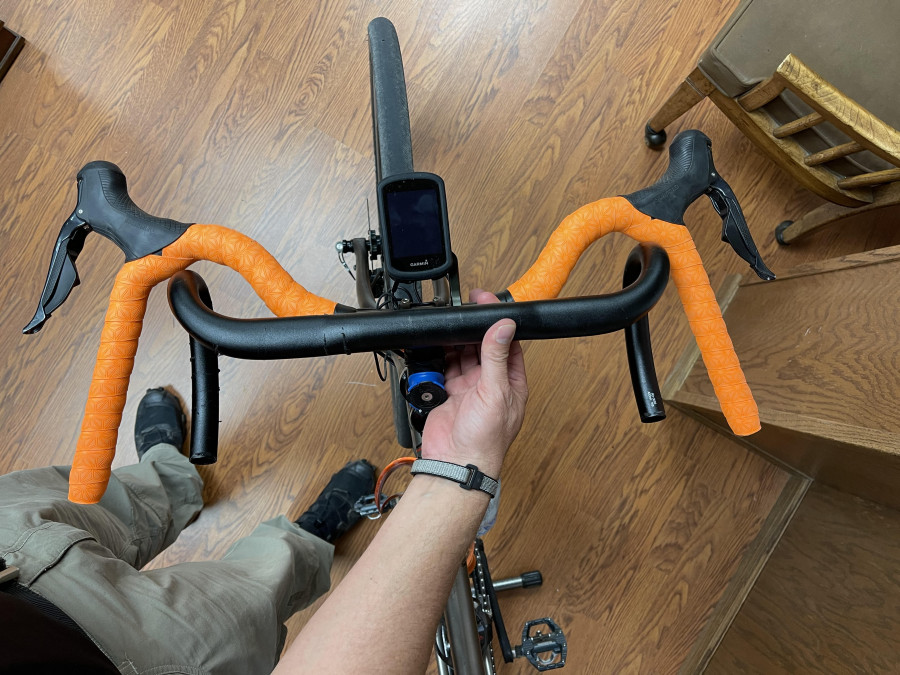