We have a saying around the office that brakes only slow you down, and while we joke that taking everything fast is where it's at, there's something to be said for slowing down and enjoying things around you (or stopping yourself in your tracks before you book it into a bull-moose that's straddling the trail up ahead). SRAM's G2 Ultimate Disc Brakes offer top of the line stopping power for those moments when locking your wheels up matter, whether it's to avoid an encounter with nature's freight train, to rail the perfect line around a steep banked berm, or simply to take in stunning views from the summit when the wildflowers are in full bloom, and the sun is casting just the right alpine glow on everything. SRAM's G2 Ultimate brakes pair technology from the previous Guide Ultimate, like 4-piston caliper, and carbon fiber levers, but with a new S4 caliper, SwingLink lever cam, and carbon blade that keeps things featherweight so you can roll with the stopping power you need, on a brake that's sub 360-grams.

As opposed to the basic Guide R brakes, the G2 utilizes SRAM's Swing Link lever. SwingLink utilizes a specially shaped cam that not only requires less travel and force to produce proportional amounts of pressure, it minimizes the "deadspot" of lever travel. Paired with the new cup-seal timing port closure system, this means that you receive perfect modulation immediately. Once the lever is squeezed, a cup seal swiftly passes this area and closes the port, pressurizing the system and forcing the pads to the rotor. The Ultimate's contact point adjustment feature is found just behind the lever attachment to the master cylinder, making it quick and convenient to dial in the brake's feel.

This pairs up with the new 4-piston S4 caliper. The new S4 caliper design incorporates a redesigned seal as well as aluminum pistons to simplify setup, and improve consistency. The forged aluminum construction means long-term durability and ease of pad removal via the top-loading design. Because some riders like instantaneous power of a short lever throw, and others prefer the feel of a longer throw, the brake levers up front utilize SRAM's Contact Point Adjustment system. This system allows you to pick the position you want your fingers to be in when the brakes engage, enabling you to quickly and easily customize the feel of your brakes without a need for moving the pads.

Another feature tossed in for the G2 Ultimate Disc brake is SRAM’s Bleeding Edge technology, which makes your brake bleeds easier and more effective. In the past, SRAM’s brakes have been notoriously difficult to bleed properly. Bleeding Edge does away with these bleed woes with new bleed porting and a new fluid path that make it easier to push fluid through the caliper. The dedicated bleed adapter for the S4 caliper plugs into the bleed port and seals the system to minimize air contamination and fluid loss. As always, SRAM uses DOT 5.1 fluid to provide heat-management, which dissipates heat and takes almost three times longer to boil than DOT4, allowing for a fade-free performance, even in extreme conditions.

SRAM's G2 Ultimate Disc Brakes come as a Front/Left or Rear/Right lever configuration, with the package-completing Centerline Rotor sold separately. The lever assembly is also Matchmaker X-compatible, meaning you're able to run your various controls off one tidy lever clamp.

Indeed, felt solid, great trail brake. I really appreciated no "wiggle" play in the lever. But, first season, had simple uphill wet root slip and the bike, with zero velocity, laid down. And well, the brake lever snapped, right at the hanger where it attaches to the bars. super simple and snaped straight in two. 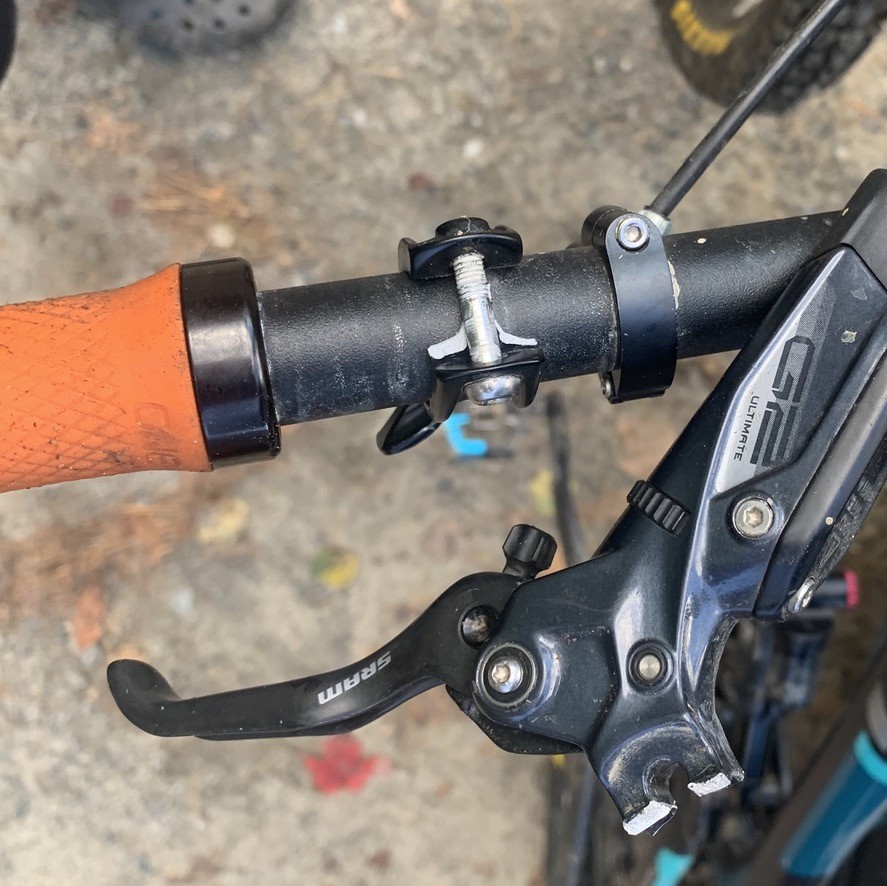 Not saying this is what happened here, but the screw hole represents a “weak point” in some designs and if the clamp had been over-tightened a bit, this could be a setup for a fracture if the lever takes a hit. Whatever the cause, better it happened when it did rather than a technical downhill section...

Best Trail Bike Brake Out There

The G2 represents the latest evolution in SRAM brakes, and while this is an entirely new model it borrows a lot from the beloved Codes as well as the Guide which has been in the line for a long time. It's lightest 4 piston brake in their lineup. Coming from Guide RSCs, there are a few standout features: Some reviews have billed this brake as a Mini-Codes, and there certainly some similarities. To me the G2 has the same initial bite as the Code, but obviously not the same overall stopping power. This is achieved with a redesigned caliper, with a slightly narrower pad pocket. This is all leads to better lever feel, as you get more initial power and bite. Coupled with the improved lever feel, the braking power feels more consistent all the way through from initial pad contact, to fully locked up. On long, sustained descents the G2 is less prone to fading possibly due to better heat dissipation. Especially steep rides, where you know your brakes will heat up I've noticed these maintain power better than the Guide. Also I find that the G2 has slightly more stopping power than the Guide. So I would say a better moniker is Guide 2.0, vs Mini-code to be more indicative of the amount of power the brakes have. In a world of ever changing standards, and proprietary parts I really appreciate the fact that you can use the existing Guide Brake pads in the G2. Which really adds piece of mind on a vacation, etc where you can walk into any shop and find in-stock replacement pads. They also offer a new organic compound, which they say isn't as quiet as the previous version of Guide pad, but in the real world I haven't noticed a difference. It also has much better wear life. So if you're looking at a new set of Guides, change your focus to the G2. More power, better lever feel, same great modulation, all in lighter/stronger package. 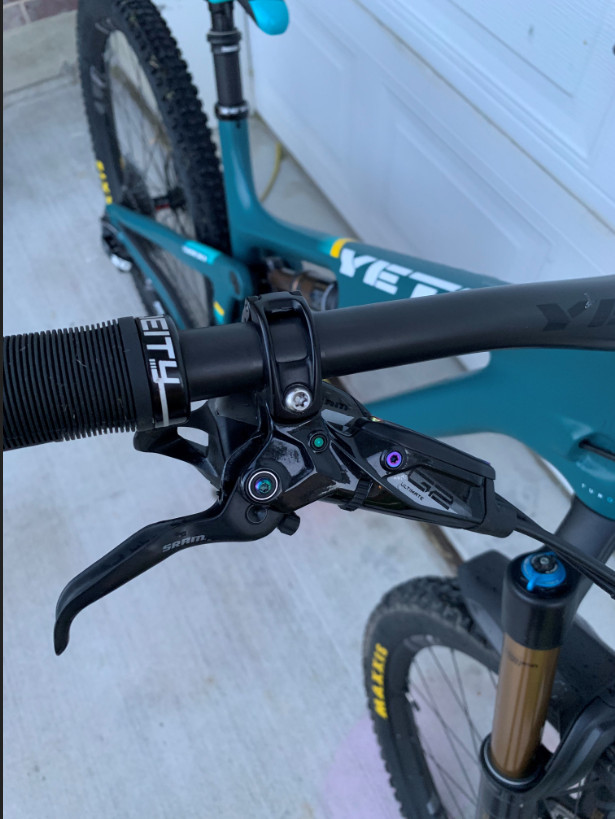 I have run a lot of brakes over my life as a mountain biker. As far as disc brakes go I have run multiple iterations of Sram/Avid and Shimano brakes. Some have been a bust and others have been very reliable. As I have progressed as a biker I have moved to more reliable models that offer more power. To be honest I thought I found my dream brakes in the Hope Tech 3 V4 and they will always hold a special place in my heart for finish and color but I digress. This spring as I was building my new SB150 I immediately chose to put code brakes on the build list. Since those brakes came out people have really flocked to them for reliability and power as well as the modulation that Sram is known for. I am happy to report that they worked flawlessly. The new bleed process using the bleeding edge tool is so easy to make your brakes feel crisp and get a consistent feel at the lever! I do know the codes are meant for mean stopping power and is why you will see it on many a DH bike or enduro machines. I have noticed it is a go-to trail brake for many riders as well I think mainly due to their durability and consistency. However, when I had the chance to have our very loved Sram rep provide me with the opportunity to run the new G2 ultimates and even have him offer to install them himself, you bet your keister I jumped at the chance. Now that I have run the brakes for nearly a month I am willing to admit that I am smitten. Not only did I get the bling treatment with the oil slick hardware but these brakes have an amazing feel at the lever, provide outstanding modulation (if that is your thing), Provide what feels to me nearly as much power as codes, are lighter, come with color options, the contact point engagement dials actually do something and the pad retraction is amazing - no out of the box piston lubrication (yes, I was a mechanic before working as a Gearhead). So my final verdict is this: if you are building a trail bike with us or upgrading your bike put these on. You may have to do some finagling to get the bolts but you might be happy enough with the grey or black colors to choose from. 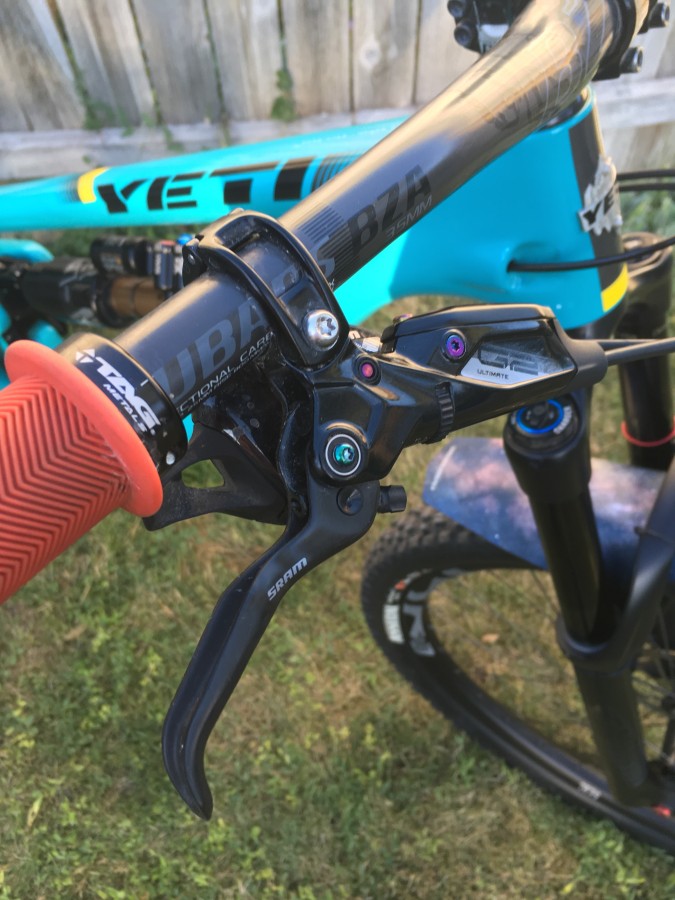 Really good review, thanks. Totally know what you mean about sticky pistons out of the box.