Despite the fact that gravel enthusiasts have been growing exponentially over the past decade, technology for the gravel front stayed pretty stagnant. Sure, some trickle-down technology from the mountain bike side hit the road less traveled with disc brakes and tubeless tires, but until recently there hasn't been a designated groupset that hits the mark for gravel riding and racing. Fortunately Shimano puts a stop to that with its GRX line, and the GRX FC-RX810 1x Crankset offers a 1x application that strays away from the world of knobby, fat tires, and into gravel, rail trails, and old forgotten roads that take you to wild west towns and scenic vistas. This is significant for two reasons — firstly, the fact that Shimano has dedicated so much time to gravel riders, but also because it's the first time Shimano offers a dedicated 1x crankset outside of their mountain bike lineup. For riders seeking the simplicity, reliability, and improved chain retention of a single-ring drivetrain on their gravel or all-road bike, look no further. As you might've guessed, it's designed to work with Shimano's GRX 11-speed gravel group. That being said, it would work just as well if you wanted to throw it on your existing bike that's already equipped with Shimano 11-speed road components.

Shimano spent over two years getting feedback from gravel enthusiasts when developing the groupset that will ultimately tackle dirt and gravel roads and singletrack on drop-bar machines. It learned that rider's wanted the option of 1 or 2x setups, wide gear ranges with low enough gears to tackle tough climbs, and of course, reliability. The GRX FC-RX810 gives you all this, and works flawlessly with the rest of the GRX 11-speed lineup. It scales in a full 100-grams lighter than its RX600 counterparts, which does come with a slight jump in price, but we're willing to pay that counts as a bit less we have to carry over 200+ miles at Kanza.

The crank is constructed of durable, lightweight, and stiff aluminum alloy, and is equipped with either a 42t or 40t chainring that provides the low gearing needed for tackling tough climbs, without sacrificing too much top end speed when you've got a long descent ahead with a tailwind at your back. The real strong point of a 1x drivetrain, however, is the simplicity and improved chain retention that we mentioned above. This is accomplished in part by specially engineered tooth profiles that ensures positive shifting without the risk of dropping your chain, even in muddy and dusty conditions.

A Big Step in the Right Direction

Gravel has been the fastest growing segment for the past few years and Shimano has finally done something about it. GRX is a much needed drivetrain but doesn't quite go far enough with gearing for us casual riders in the mountains. To start with, performance and looks are on par with Shimano's road groups, so really good. It's a very clean looking groupset. So if you've liked your Ultegra drivetrain but want easier gearing, going to GRX makes good sense. There's some compatibility between the two groups too which is nice. On these cranks the chainline is spaced outboard for tire clearance which hasn't really been an issue for most bikes and means they're proprietary which is frustrating. I went 1x and they do have mounting points for a small ring if I want to switch to 2x down the road. The chainring has no issues holding onto the chain on the rough rocky terrain I've tested it in. With no substantial complaints on the quality of this group my big gripe is the gearing options. For 1x (which I'm a fan of) Shimano only has 40t and 42t chainrings which are good options for a lot of riders on flatter terrain and for gravel racers but us bikepackers and for those big days in the mountains we need smaller rings - I've been using a 38t ring until now and would like a 36t some days. Sram's AXS drivetrain mullet builds are popular for that giant 10-50t range and mountain chainring, Luckily Wolf Tooth has a 38t option but If Shimano offered us more rings out of the box they'd have a perfect, more versatile group. 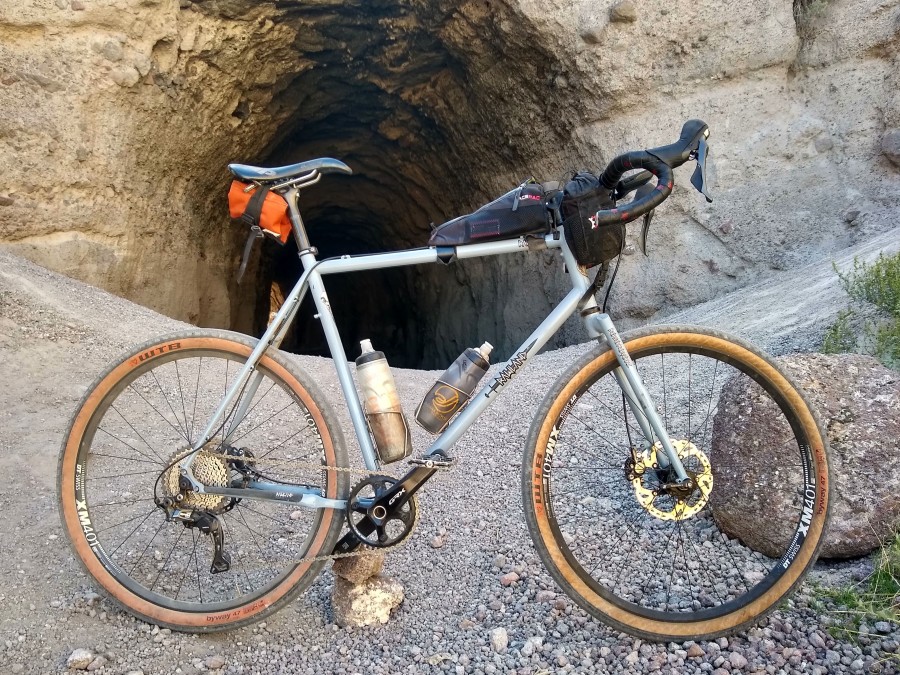