There's been a rigid resurgence on the off-road scene, with gravel grinds headlining bike news, and a sense of adventure rekindled as cyclists set aside their road-only steeds for more capable machines built for life beyond the blacktop, and with this resurgence, we're hardly surprised that the carbon geniuses at Santa Cruz didn't skip a beat when it came to launching lofty hoops for off-road adventures. The new Santa Cruz Reserve 25 650b Industry Nine Wheelset makes a perfect option when you're going for maximum traction on your gravel bike, offering wide internals capable of hosting a tire up to 2.1-inches (if your bike's clearance will permit it), so you can take on the gravel with a bit of pneumatic suspension that takes the sting out of harsh chatter and brake bumps.

When Santa Cruz and Juliana announced the new Stigmata and Quincy, we thought it was only appropriate that the brand crafted up some carbon hoops to match, and we're pleased to see that both the standard 700c and loftier 650b options are offered. With fully rigid rides taking on all kinds of terrain, finding ways to add in cushion is important — particularly when your adventure takes you down long forgotten roads to ghostly remains of gold-rush towns, far from cell service, and modern comforts. The 650b Reserve 25's make for perfect partners these such adventures, with a lofty 25mm internal and 30.5mm external width that provides the perfect platform for huge tires (40-to-55mm or 2.1in) that can be run at intensely low pressures, both increasing your traction when you roll into loose and dusty corners, and soaking up hand-numbing brake bumps.

Much like you'd find across the majority of Santa Cruz's reserve wheel lineup, the Reserve 25's use a hookless bead, which is afforded by the wheel's wider interior, and lofty tire choices. This hookless bead secures to your tubeless tire snugly, and without the fuss of seating a tire on a hooked rim. Just as you'd expect from Santa Cruz, the wheels use top-tier carbon and resins, meticulously laid up and tuned for rough surfaces to create maximum strength throughout, which enables the spoke count to be dropped down to just 24 bladed Sapim spokes, to add a hint of aerodynamics and compliance. The spoke drillings are offset, just like in other Santa Cruz rims, to equalize bracing angles and spoke tension on each side of the hub.

This particular model of Reserve 25 come laced up neatly to Industry Nine's coveted Torch hub. The Torch has been a long time industry favorite, as it packs in a six-pawl driver for just three degrees of snappy engagement, which translates to near instantaneous power the moment you put the power on the pedals. These particular hubs use 12-millimeter thru axles on both the front and rear, which provides uncompromising stiffness that won't waiver under the pressure of a fully loaded steed soaring down a gravel road as you descend, and keep things snappy for cranking up steep mountain sides. 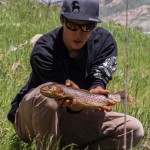 Hey Steven, the red Santa Cruz Label is not removable but if you buy the wheelset they do come with 8 different color decals.