Welcoming wider tires, the Reynolds TR 307S 27.5in Boost Wheelset hits the ground rolling, ready to tackle the mountain with little fear. These wheels manage to nail the golden zone in the price-to-performance ratio, giving us the same stiffness we found from Reynolds' Blacklabel rim, and a CNC-machined hub from Reynolds directly to shave a few bills off of the price tag, giving us an all-mountain ready hoop with lightweight carbon and undeniable strength that doesn't break the bank, or upset your SO. The rims offer 30-millimeters of internal width that lets those of us chasing wider tires enjoy a plush ride, without going too over the top — and then there's the Boost spacing, adding extra stiffness to the whole package to stay responsive through world-cup level rock gardens that try to deflect you off the trail and into the bushes. The result of this recipe takes boost spacing, and adds rim width, a generous helping of carbon fiber, and folds in a new hub to bake a perfectly risen chocolatey cake of powerful all-mountain goodness.

Focusing on a friendlier price point than the deluxe Blacklabel line, the designers are Reynolds put focus into creating their own hub for the TR307S, capable of exceptional performance without the somewhat painful price tag that comes along with some other hubs. Using CNC machining, they created the Reynolds TR6 hub, cut from aluminum in one piece to ensure strength, and features 72 points of engagement. Six phased pawls propel you forward, with just 5-degrees of engagement, so you're the wheels carry on a responsive and light-on-the-feet feel you want for quick power bursts up punchy climbs, or chomping at the bit right out of the gate on race day.

The TR 307S wheels are built with asymmetrical rims that we also saw on the Blacklabel series, which enables a stronger wheel through more even spoke tension. This translates to a ride that powers through the rocks without deflecting when you pick the wrong line and would otherwise get bucked around. When combined with the wide, Boost spacing, the wheels strength truly shines through with a completely evenly tensioned wide angle to keep you locked into your line no matter what. While Boost may not be news to quite a lot of us, it's worth reiterating how it works: by setting the flanges wider, Reynolds is able to improve the spoke bracing angle, which stiffens the wheels laterally and torsionally (translating braking and pedal input from the hub to rim to trail) without stiffening them radially (so the wheels don't translate every bump and root straight up the seatpost). While bumps and trail chatter are less of an issue with such a wide rim, we're generally under the assumption that less of a bad thing is a good thing. Adding 28 straight-pull spokes to the mix, you'll find lasting durability, and just the right amount of flex, so your wheels don't feel harsh through wily rock gardens.

In addition to being strong, the rims feature a wide profile capable of accommodating the plusher tires that have been afforded by the addition of boost spacing to bikes. The rim's internal width lands at 30-millimeters, which most of us here in the office are in agreement on being the optimal rim width for enduro and trail rigs. This width allows for running wide, but not plus tires, with our happy place being 2.5-and-2.6-inch tires that allow us to run slightly lower tire pressures around 18psi for gripping loose corners and soaking up beefy roots and rocks, but without gaining rolling resistance the way most ultra-plush 2.8's do.

Like the Blacklabel series, the TR 307S uses Reynolds' Mountain Rim 5 (MR5) carbon fiber layup. This layup involves five different carbon matrices applied to five different areas of the wheel. A decidedly serious carbon layup — this construction process is more complicated than many frames, placing specific matrices to maximize strength. And though we don't often dwell on the possibility of equipment failure while blasting berms and charging into lines that are a bit too rowdy, the fact that Reynolds puts so much engineering into the rims helps ensure that we won't have to dwell on equipment failure. For months. While wearing a cast and saving up for a new wheelset and/or bike.

Carbon hoop with a Lifetime warranty.... Why not!! The Reynolds TR307S roles in (pun intended) with a budget friendly carbon wheel that has a lifetime warranty, yes please. Not only that but it comes taped, pair of tubeless stems, centerlock to 6 bolt adapters, centerlock nuts and a sticker kit for customization. All you need to finish it up is a tire, rotor and a sealant! Comes out of the box with a 5 degree engagement hub which might not be the tightest out there, but honestly I don't have much of an issue with it. I've run the I9's before with the 3 degree the 5 is really good. I went with these as I wanted a bullet proof and tough wheelset to bomb some rock gardens, huck the drops and just ride the gnar without worrying about my rims and I can say these did not disappoint. I ran them with a set of the Maxxis Double Down Assegai's and can say I did not have any issues all year. 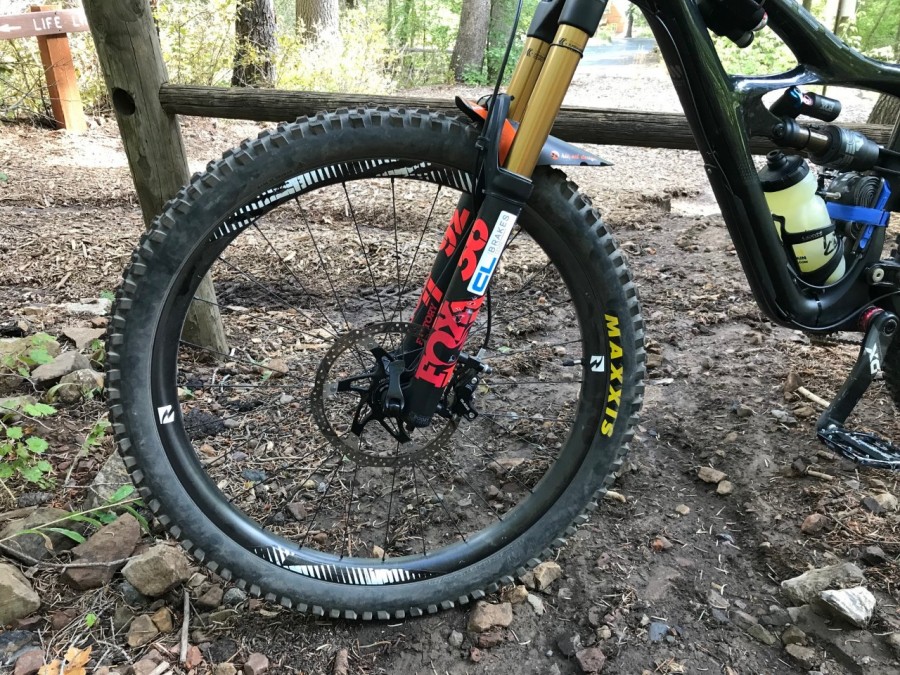