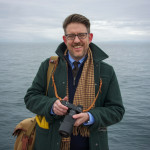 I bought this beanie at the tail end of a MN winter. There's a season here -- stretching from late March to May -- which isn't really winter or spring. It can be 50° and bright one day, then (like today) a mix of slush and stinging hail.

The hat is great for this time of year. It's not a hefty wind-blocker at all, but this means it feels soft and light while still warming my head. It rolls up without too much bulk, for easy tucking into a bag or what have you when not in use. Looks-wise, it has a simple weave and no glaring branding. Worn rolled at the bottom, it's like a watch cap; when unrolled, it has a funky, slouchy look (my preference with this hat).

This is a nice mid layer for early mornings in the fall, when you're out moving around and don't want too much insulation. But it is indeed a lightweight flannel, and I doubt I'll get as much use out of it as my more standard weights, come the MN winter.
Haven't washed it yet, so perhaps it will soften up, but the material is surprisingly coarse for this type of shirt. Otherwise, it seems to be well-constructed, and I'm really pleased with the colors. I also like that although it's technically long enough to tuck in, it looks perhaps a bit better untucked, which gives me a different look than my other flannels.
I'm someone of roughly average build who has recently lost enough weight to move back to a M from the L/XL zone I'd been in for a while. From that perspective, I would call the fit true-to-size, and my M fits great. If I get toward the smaller end of the M range, however, it might start feeling a bit boxy; People who are skinny or desire a super-trim fit can probably size down.

FIT STUFF: I congratulate many Backcountry customers for (apparently) being Nordic marathon runners or whatever, but thought folks could also use another opinion from someone who isn't 6'3" with single-digit body fat. ;-)
My natural weight is around 175# (at 5'11"), and body-wise I skew dadlike; not pear shaped, but not suited for aggressively skinny/tapered cuts. However, when I bought this jacket this summer, I had crept well north of 195# (possibly above 200#?). At that time, the L jacket fit quite flatteringly. Worn over one or two light layers, it was perfect across my broader shoulders and chest, but also pleasantly skimmed my (roughly equivalent) middle, ending just below my waist/beltline (the slanting shirttail back helps visually slim/elongate the torso, too). The only aspect of fit which didn't work for me was the arms, which really are long but can be cuffed. For comparison with other garments, the torso on my L is about 25" across at the pits and 23" at the middle, with a roughly 21" shoulder, 29" back, and 38"(!) sleeve.
My feeling is that this jacket manages to look really sleek and athletic on people who are more tubular than triangular, when purchased in their size range.
I've since got my weight back down to under 185, and now the jacket looks a bit floppy, unless worn over a thicker layer like a sweater or sweatshirt. Having enjoyed the fit as someone pushing the upper limits of L (US standard, XL in more Euro cuts), I would feel confident buying it in a M now.
QUALITY STUFF: The fabric looks and feels very capable. It is soft to the touch and matte, with a subtle ripstop texture. To the degree I've used it rainy conditions -- light to heavy showers, and a few sustained storms -- it seems to be about as waterproof as can be expected, for something that must also be packable and breathable.
Actually, that breathability aspect is one of the the few cons of the jacket. It does let a fair amount of wind through, but still starts getting clammy pretty fast (about 15 minutes into any given activity, for me). I imagine that many users are going to be pulling it on and off as they hike, so this may not be as much of an issue. For me, a more urban user who doesn't have a handy backpack at all times, and would rather not carry their jacket in their hands every 30 minutes... Yeah, a little less than ideal. Vents in the pits or across the back would make all the difference, and I'm baffled that a jacket at this price point couldn't be bothered.
Most of the construction and design details are top-notch, though. There are a couple of cinch systems built in, and they are pretty easy to use. The zipper (especially the pull) is flawless. And the hood! I don't actually like hoods much, particularly how they blow around in the wind and obscure peripheral vision. But this one is weighted just right in the brim, allowing it to stay put surprisingly well while providing decent views to both sides.
OVERALL: I've had to replace a bunch of clothes as I gained weight, and now again as I've been reducing it. Given the slight cons, I'm still err, weighing whether this jacket will make the cut for replacement (although I will totally stash it in my car or maybe a camera bag, for emergency use). But, for those with a similar build to mine, who aren't sure whether it's *truly* true-to-size, I'd say go for it.