Believe us when we say they're small

I wanted to find out for myself. I ordered a size larger than my regular underwear size, and while the waistband was loose and floppy, I could not get these all the way up over my thighs and derriere. Patagonia messed up when they changed the fit of these. Returned and won't be looking at Patagonia underwear anymore. Sticking with Smartwool and Ex Officio.

I pair this locker/keeper with my megajul. The megajul is prone to rotating, and this keeps it oriented happily on my belay loop. I've heard/read skepticism around slider lockers being unsafe—I can assure you I've never had any issues with this 'biner, even when trying to simulate a failure.

I've used several assisted braking devices, and this is hands down my favorite. It's lightweight, intuitive, effective, and inexpensive.

Pros:
– Highly versatile: accepts a wide range of rope diameters. On a side note: this thing seems to love Sterling ropes. I've never felt such smooth rope handling from an ABD.
– Lightweight: In material terms, this is more or less just an ATC. It weighs exactly the same as the BD ATC.
– Easy to Use: Yeah, it looks confusing/daunting when you first throw it on your belay loop, but it immediately makes sense when you use it.
– Effective: Cue humility. This saved my climber and my bacon when I lost my footing and my hand came off the brake, simultaneously when my climber was taking a fall. We as climbers back up everything else—it just makes sense to have an ABD as a backup when belaying.

Cons
– Finesse Required: When first using this device, you have to learn the finesse when lowering. There's not a lot of modulation between fully braked and fully open. It takes a little bit to learn the sweet spot, and you have to relearn with each new rope
– Thumb loop poorly molded: This is just a minor nag. The seam on the plastic where the two molds come together is not clean. I just took a very high grit sandpaper to it momentarily to smooth things out.
– Definitely needs a belay 'biner with a keeper, as it is eager to flip or get cross-loaded. I pair it with the Edelrid HMS Strike Slider FG, and they are quite happy together.

I highly recommend this device. If you're in the market for an ABD, give this guy a shot. You don't need to break the bank to have a top-quality ABD. I guarantee you, once you start using this device, you'll throw out everything else but your spare ATC.

*Sport and trad climber, climbing 5.11a on sport and use this device 3-4 times a week.

Ian Lemleywrote a review of Darn Tough No Show Light Cushion Sock - Men's on May 1, 2017

Both Medium and Large have size 43 listed as fitting. Let me save you some time and grief by telling you to get Mediums if you really are a size 43. The Larges are oversized and aren't actually no-shows because of the extra fabric. Otherwise great socks. Not sure I would call these light cushion—they're significantly thicker and warmer than my smartwool light cushion micro socks. They're incredibly soft though

I've had these pants for 4 years now. I initially got them to complement the jacket of the same brand and model, both backpacking and for rain protection when riding my motorcycle.

I can't say I can ever remember a time when these were actually waterproof. They've always leaked through the zipper. They also soak through the seat of the pants, though this could be because I use them on to commute in the rain on my bicycle. However, my biggest frustration is that anytime I get somewhere and take these off after being in the rain, the water on the exterior of the pants somehow makes it to the interior. I'm not sure if it is condensation from the external fabric being cold or if the water is actually soaking through, but I am incredibly uncomfortable every time I have to put these back on after being in the rain once already.

A second frustration is that the leg zippers are not full-length. This makes changing layers when mountaineering difficult, as I am typically wearing crampons.

I also have found these pants to be highly unbreathable, even for gore-tex. This is purely anecdotal, but I feel like the pants are only half as breathable as the jacket.

These pants are water resistant, but by no means waterproof. I've retreated the DWR and still keep running into the same issues. Here's a quick guide of my applications for these pants and the outcomes:

Hiking: Not very breathable, even for Gore-tex. Can't sit in these as the seat of the pants will soak through, even in snow.
Cycling: Again, not breathable. Also, the seat soaks through in as little as 2 miles.
Motorcycle: Water pools in the crotch, and leaks through the zipper

My takeaway from the Marmot Minimalist products is that Gore-tex paclite technology is incredibly inferior to their pro tech (3L). I've upgraded my upper shell, and I'll be replacing these pants sometime this year as well.

Not Waterproof in the Least

These have been my winter hiking boots for 2 years now. I don't think I can ever say that they've been waterproof. And I'm not just talking about sweaty feet. I've had plenty of snow melt and cold rain soak through these. They're warm-ish, until they're wet. Then they get incredibly cold.

I was going to have them resoled this year, but it's just not worth it. I'm gonna get a worthwhile pair of mountaineering boots. If you're doing anything besides just walking around town in these, you should do the same.

I've had this jacket for about 8 years now. Initially it was great—I used it on the requisite hiking and backpacking trips, but also as a rain jacket on my motorcycle in the Texas summer showers. Initially it worked incredibly well, but over time, even with reapplication of DWR, it's less than what I need.

When I first got it, I used it heavily in downpours while riding my motorcycle, frequently at 70mph on the freeway. It kept me ALMOST bone dry, with the exception of one little dribble that worked its way through the front zipper. I couldn't complain, I was subjecting it to harsher conditions than it was designed for.

However, over the last three years, I've been using it here in New England as my hiking, backpacking, and mountaineering shell, pulling double duty as my bicycle commuting rain jacket. During this use, the waterproofing has suffered.

in early 2014, one of the seams inside the left armpit started experiencing delamination. I contacted Marmot, and they fixed it up (for free under warranty, I believe). When I received it back, I decided it was probably due for another DWR treatment. I always use spray-on rather than wash-in for membrane products. Shortly thereafter I started to notice that my shoulders felt cold and wet under my pack straps, primarily when biking but also when in the woods. At first I thought it might just be heat conduction from the cold water on the face fabric. But eventually I noticed actual soaking on the garments beneath the jacket. I've retreated DWR several times, and always give the shoulders some extra love, but no matter what I do they always soak through after a short while.

About two months ago, the seam that Marmot had repaired started delaminating again. The shoulders are still wetting through.

While this jacket keeps me fairly dry, I can't give it a decent rating because it doesn't live up to expectations. From what I have heard, Gore-tex products should last 10-15 years when treated with care. Mine goes in the wash after every second or third use (unless I'm riding, in which case it gets washed as soon as there's sunshine in the forecast). I retreat the DWR at least once a year. I wash with soap, not detergent, and do a second rinse. These are all care guidelines from both Marmot and Gore-tex. Even with this care, the jacket doesn't hold up as much as I'd like it to.

OR makes great products, and usually has solid quality control. Unfortunately they came up short—literally and figuratively—with these pants.

I'm going to echo Christopher P. in saying these pants are WAY too short. I ordered 32" inseam and wore them a couple of times, thinking each time, "these are high waters. These Don't even cover my ankles. They BARELY come down to the tops of my boots."

So I decided to measure the inseam. 29 inches. Cmon, OR. I expected better from you guys. 29 inches isn't even CLOSE to 32 inches.

Now on to my second gripe with these. The pockets are incredibly shallow. I like to keep a clif bar in my pocket when climbing multipitch, and the bar barely fits in these pockets. One one climb, I had the bar actually fall out and thump the rock next to my belayer.

The finish of these pants is great. I love the cut, I love that they are slim fit. They stretch and move with your body well. They make great climbing pants. I just wish they were of adequate length and had useful pockets. Unfortunately both of these are enough for me to say I can't recommend these pants. 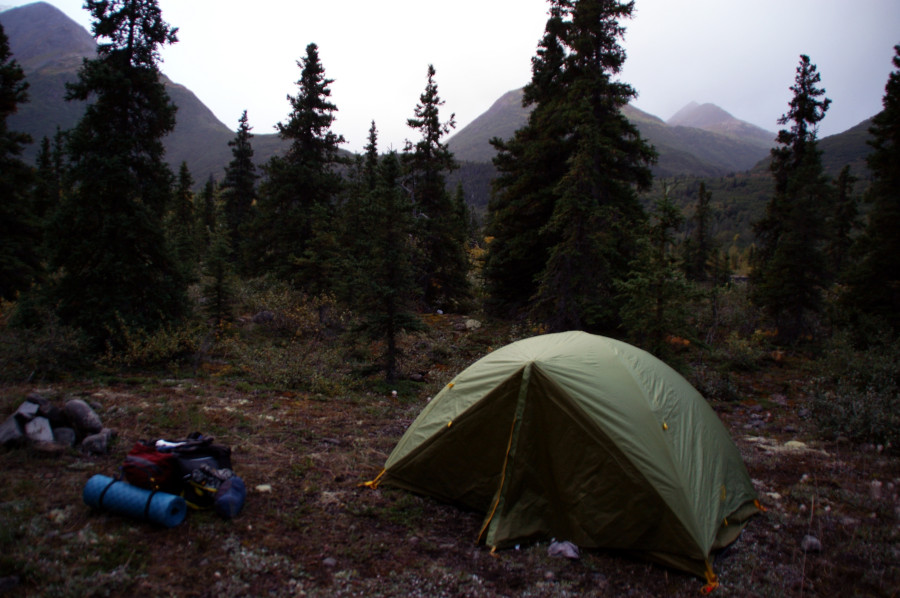 Early September overnight hike on the Crow's Pass trail in Anchorage, AK. This was at 8 in the morning after a windy wet night. The tent held both me and my buddy (both over 6ft tall) and all our gear inside, and withstood 40-50 mph winds that night. Love this tent!

When TNF says this jacket is 100% windproof, they aren't lying! I needed a jacket that I could wear out on the ramp at the airport (I'm a ramp agent) that would keep out the bitter cold wind during the winter, but didn't have a whole lot of insulation so I could layer accordingly. I bought a size larger than normal so that I could do so. This jacket far exceeded my expectations. All the windshells I've had in the past weren't really windproof--more wind resistant. This thing is even more windproof than my motorcycle jacket, so I've started wearing it underneath. THIS JACKET IS AWESOME.

The description on this both here and at...

The description on this both here and at CamelBak's website only says this is for bad tastes and odors--I assume it is not for bacteria like a true water filter?