Our Response to the Coronavirus
Edit Cover

I don't have wide feet. I do have collapsed arches, but other than that, I don't have weird shapes to my feet either. My insteps are medium to very slightly above medium height. All of this combines to say, if a shoe is anywhere close to "regular fit," it would probably fit me. These boots didn't.

Others already touched on the terrible lacing system so I won't beat a dead horse. What I found terrible is how tight (note: not snug, which is proper) these boots are. The heels are fine. The toe box is also a fairly proper, maybe even roomy fit. But the quarter and the instep is absolutely terrible, about the worst fit I've ever had the displeasure of putting on my feet.

Trying these bare feet. The side of the feet felt tight. Furthermore, the insteps were highly uncomfortable, almost painful. I tried playing with the lacing system to no avail. This is when I discovered that the tongue of the boot is stitched to the upper, which while I'm sure helps insulation and waterproofing, means an inappropriately tight boots will not allow any give to relieve discomfort. I couldn't wait to get them off my feet. I'm sure if I tried them with even thin socks, they'd be even worse.

Which makes me wonder. I'm not a wide foot and I don't have high insteps. If I can't even fit into these boots comfortably, who did Vasque make these for? What's the target market? 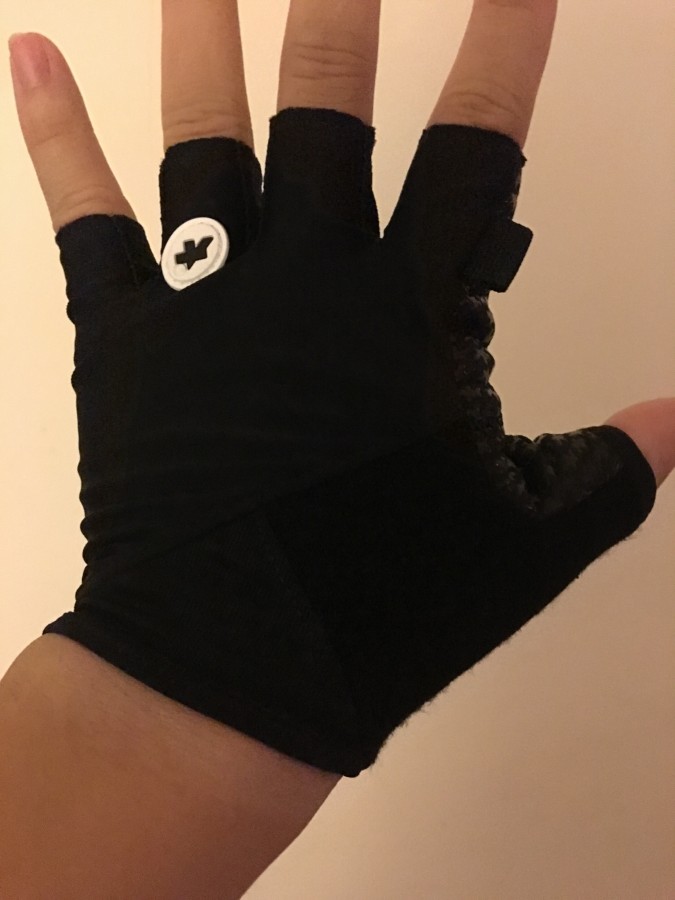 I use Assos bibs; I have Assos jerseys; I even have a pair of Assos socks. So I guess it was only a matter of time before I bought the gloves.

I'm coming from a pair of Louis Garneau Mondo 2 gloves which I think are pretty decent gloves, but as soon as you take the Assos out of the bags, you can tell they're built better. The fabric throughout the gloves (including the upper) are denser and the padding, both in the upper and lower palm are thicker. Whereas most of the palm of the LG other than strategic areas (like the center of the palm) have only fabric, the Assos gloves used thicker material as well. If I am to fall off my bike, I think I'd rather do so in the Assos.

But once I tried on my normal size (medium), they were very tight and difficult to get both on and off my hands. Competitive Cyclist was nice enough to send me a pair of large the try on for size. But the large also didn't feel quite right and had a lot of excess material. Examining the gloves I figured out why these didn't fit.

As other mentioned these gloves didn't have Velcro enclosure. This required the gloves to be longer (sits lower on my wrist) as well as being tight in the wrist to stay in place. But this also meant that the gloves were both tight on my wrists as well as being more difficult to put and on remove. This is especially a problem since I don't (or at least think I don't) have thick wrists. The medium actually felt quite nice on the other parts of my hands (other than the tight wrists). For comparison's sake, the larges don't feel as tight in the wrist but are actually even more difficult to put on/remove due to them being longer therefore sits even lower on my wrists. Also for comparison, the LG Mondo 2's with the adjustment Velcro enclosure and shorter wrists are quite comfortable.

I think this is the reason why some people find these gloves true to fit while others find they fit small.

I have not ridden in these as I won't be able to return the non-fitting pair if I used them. I think I'll keep the medium and return the large and might update this review once I've had a couple of rides in them. Overall though, as these are $69 gloves and Assos essentially never going on sale, I find the lack of Velcro enclosure and the resulted "poor fit" disappointing, although as I mentioned, they are very well made.

What is the difference between this one and the Twin Speed? Is it just the release controls?

Also, does this come with a cartridge? If so what size?

Feng W.wrote a review of Giro Range Helmet on January 5, 2016

I have a more round than oval head. As such, I've always knew certain helmet brands will never fit me. Giro was one which didn't have this problem. My previous Giro Seam was light, comfortable, integrated well with my googles, looks alright and was protective (wiped out after a snowboarder clipped me, almost hit a rock). So when I handed that one down to my son, of course I'd try another Giro. And this one had MIPS too, what else could you ask for? That is, until I tried this one on...

After placing it on my head, it was comfortable and light. But as I adjusted to tighten the size around my head, the familiar pressure/pain on the side of my head (close to the top) appeared, like those oval fitting helmet brands which didn't fit me. What happened? Taking off the helmet to examine it revealed the terrible design.

Whereas on my previous Seam helmet, the Boa system only adjusted the strap around my head, the system on the Range tightened the entire helmet. That is to say, it brought the shell closer to the head. And what happens when you brought a round shape closer on the back? Well, it changes from round to an oval. The so called articulated shell design (I think), which brought the bottom of the shell (and by extension, the walls) closer to my head.

In my case, a large fits 59 to 62.5 cm. I'm on the smaller side of that range. As I tightened the helmet, the round change to oval, which increasingly put pressure on the size of my head. In other words, it's not just the size that changed, but also the shape/fit.

I'd imagine an oval shape headed guy with a larger head would have the opposite problem. As he increased the fit, he not only increased the size, but also the fit from the oval shape he'd prefer to round. So unless you're in the sweet spot that just happened to be in the middle of 59 to 62.5cm, you'd have this problem.

So initial impression of this helmet? Light, comfortable (even more padded than my Seam), looks pretty good. Never had a chance to use it though. The fit would never work. Avoid if possible, especially as expensive as it is.

My wife rides a 2014 Specialized Amira base model with a Shimano Sora (2 x 9 speed) groupset. Do I need to buy anything else to upgrade her bike or does this set includes everything she needs?