Florida and the Appalachian Trail 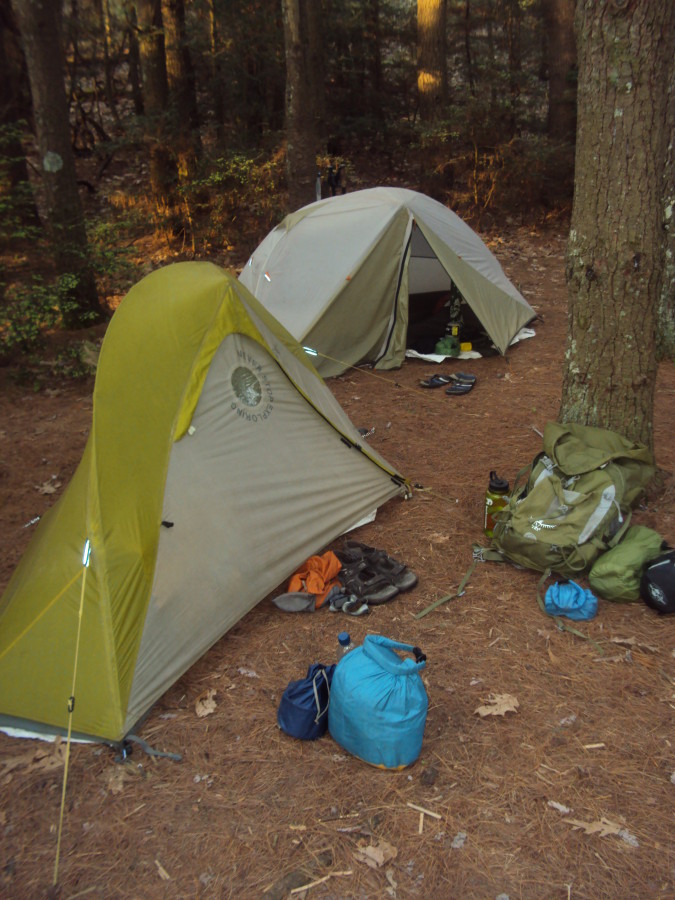 On the AT, 9 miles outside Damascus, VA.

Great as a summer bag.

Used this on the Appalachian Trail in 2012 as my summer bag. Had it sent to me in Damascus, VA and changed back to my North Face Blue Kazoo 15 degree in Hanover, NH just before starting the Granite State! Nice and light for backpacking and held up well for 3 months. There were some nights in PA, NJ, NY and CT where it was too warm to sleep inside, so slept on top in my liner, but was glad to have it as even in the summer months we got a few thunderstorms that left me drenched and it was great to climb inside to warm up. A few nights it did dip down low enough to actually climb inside in the middle of the night. Great summer bag and nice and light. I'm 5'9" and have broad shoulders and the regular was perfect. Also, I have the prior model, but I think the only thing that has changed is the print scheme on the outside (mine is all yellow). 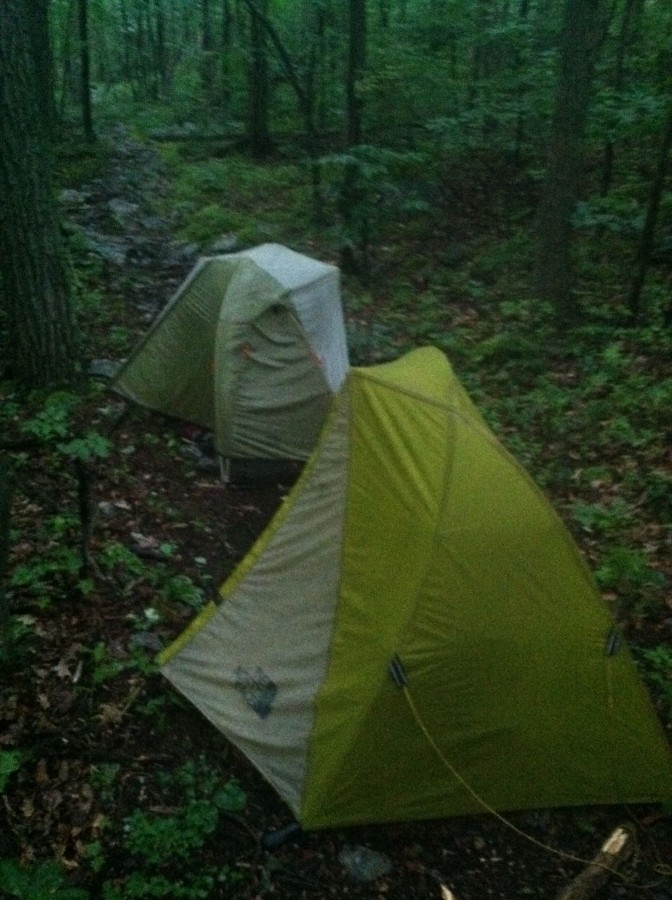 Used the Mica 12 on my AT trip in 2012. The tent held up beautifully and was my home away from home for 189 days. I am 5'9" and had several inches of room at my feet and head. I have broad shoulders and there was ample room on either side for stuff sacks, my journal, books, etc. Before my trip, I was worried the vestibule might be a little small, but in fact this was not an issue, and had plenty of room for my pack, hiking shoes and camp shoes. I have the previous model and so I did not like the "third" pole design at the foot of the tent. Though it is marketed as free standing, the "third"pole was a design flaw and did not allow the foot of the tent to remain erect in a width was fashion. This was only a problem really on tent platforms or in areas where it was hard soil or rock an I couldn't stake it out. I just rigged it with some glow cord and it worked okay. The new model appears that they have remedied the problem. The tent itself was well-built and like I said, lasted the entire length of the AT and she still has many hundred miles of life left in her I'm sure. The zipper began to give me some issues in Maine, but nothing major. Guess that will happen after many hundreds of openings and closings. The rain fly has 3 zippers on the door which was great for partly opening the door for ventilation. A feature that a few of my hiking companions didn't have and they wished theirs did. Hope they didn't change that on the new model. At almost 3 lb's it was good weight. There are lighter options, but felt it was worth it. Overall, I like this tent and look forward to many more nights in it!

Not a good product

First let me say, I love Osprey's packs. But this product is terrible. I've owned 3 and they all began leaking in the same spot, near the bottom at the seam. I started the AT last March 2012 with a brand new one (my third and last)and 9 days in near Franklin, NC it began leaking. I replaced in Nanthala, NC with a 2L Platypus and it lasted the rest of the trip with no problems. Furthermore, my dad, who was with me thru-hiking had the same issue with his, albeit his lasted until Hot Springs, NC. Also, 2 other thru-hikers we met had issues with leaking and had theirs in trash bags in their pack. They, too, replaced with a Platypus brand reservoir. The Platypus was the most widely used reservoir on the trail in 2012 and only one person I know of had an issue with the outside of his Platy delaminating and it subsequently sprung a leak, but he had had his for a few years. So between my 3 leaking Osprey reservoirs, my fathers 1 and two other AT hikers in Hot Springs, NC, that's 6 leaking Osprey reservoirs. I would not buy this product again and NOT recommend to others. Great packs! I will never not own an Osprey pack, but the reservoir is garbage! 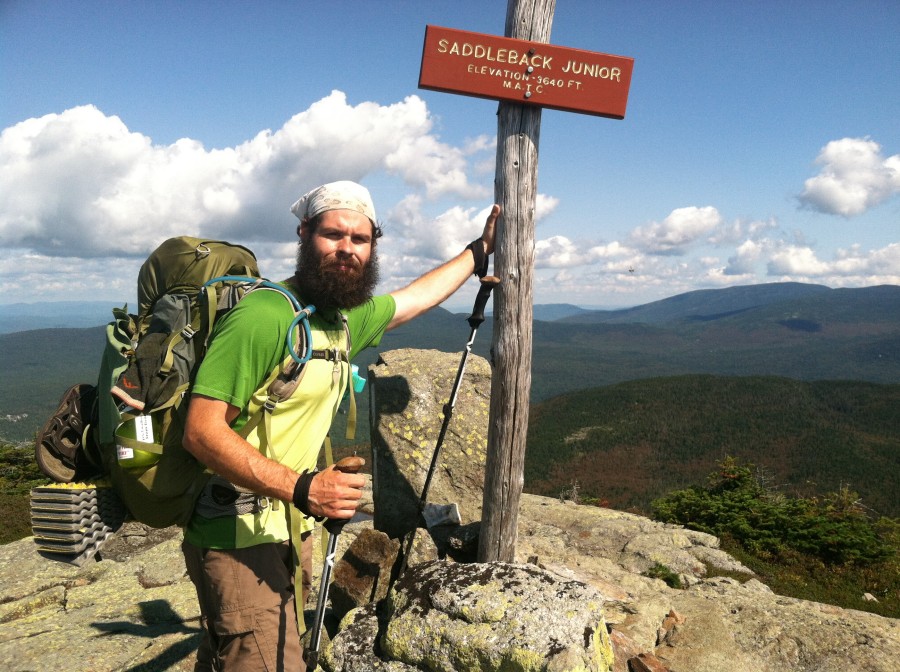 Used this pack the entire length of the AT in 2012 and loved it the whole way. I have 2 other Osprey packs (Argon 85 and Aether 60) and this one fits the best. I have the previous model, but several of my firends had this newer version and not much has changed. In fact, I will say that about 80% of the hiker class from 2012 had some model of Osprey pack. The Atmos and Exos were the most popular, but did see a few Talon 44's and Kestrel models. The girl I hiked with had a Gregory and wished she'd bought an Osprey after hearing such rave reviews by fellow hikers. 2184.2 miles equals a well tested product and high approval rating! If you are planning to thru-hikeor just looking for a great pack for short trips, do yourself a favor and buy this pack! 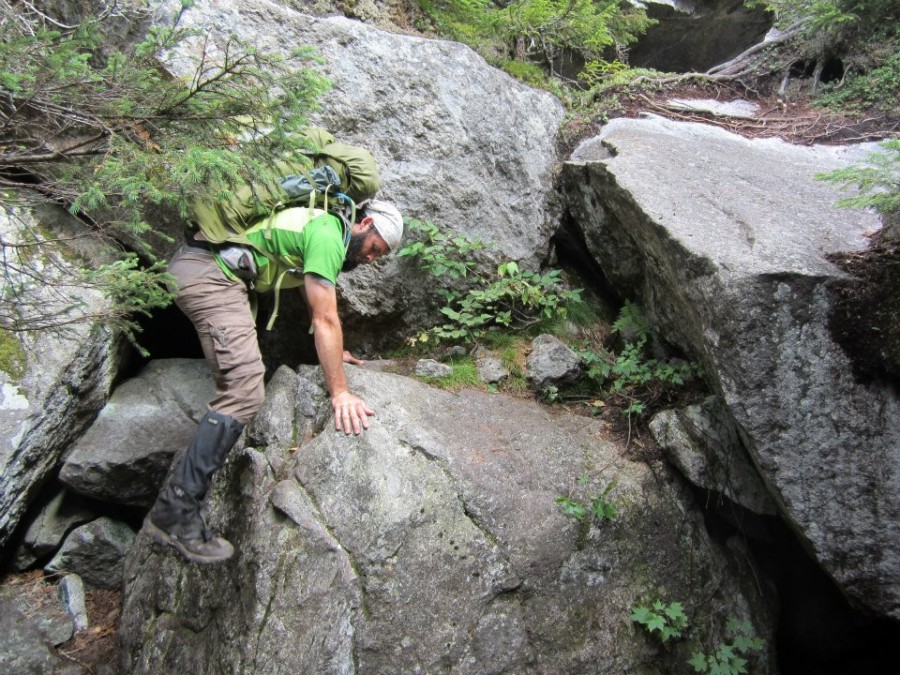 Me and my Atmos in the Mahoosuc Notch

Anybody have problems with this leaking?...

Anybody have problems with this leaking? Bought an Osprey Raptor 10 for trail running and came with the Hydraform Reservoir. Worked great for a long time. Very durable, easy to clean, water tasted great! But then about a month ago it just started leaking at the bottom of the reservoir (or at least that is where, due to gravity, the fluid is collecting and dripping from). I examined the whole thing, and there appears to be no source. Visually all the seams are intact. Nothing is frayed or splitting. Gonna order another and see if that has the same problem.

Christopher Hoodwrote a review of Sea To Summit eVAC Dry Sack on August 17, 2011

Use this as my food/bear bag. Keeps my food dry whether it's in my pack hiking in the rain, or hanging away from da bears. The actual bears! 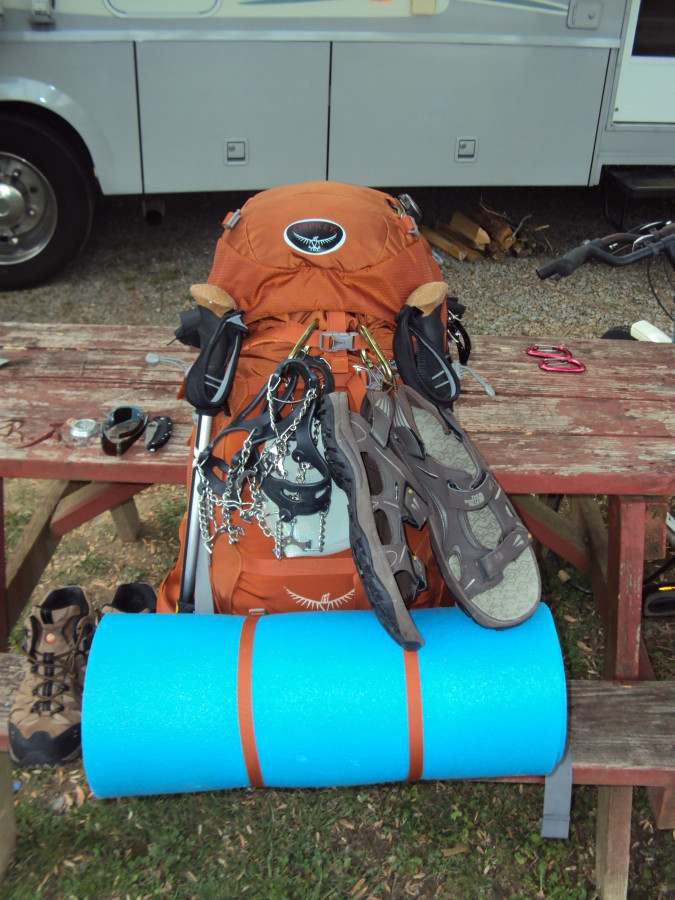 Great pack! Lot's of space for my 7 day trip. Carried roughly 40lbs (packed weight) comfortably on the AT throught the Great Smoky Mountains NP. Now, I will add that I did swap out the shoulder harness from my Osprey Argon 85 because the shoulder straps padding seemed much thicker on my Argon but did use the Isoform hip belt that the Aether came with rather than also swapping the bioform hipbelt from my Argon. However, whether I had the option of swapping shoulder harnesses or not, I am supremely confident that this pack would still have carried the weight well, and with maximum comfort. The pack seriously has a lot of space and lot's of places to hang stuff. The fabric is very durable and feel that it will last for a long time. The true test will be 2012 as I will be using this pack on my AT through hike. I am 5'10", 165 lbs and have a medium. 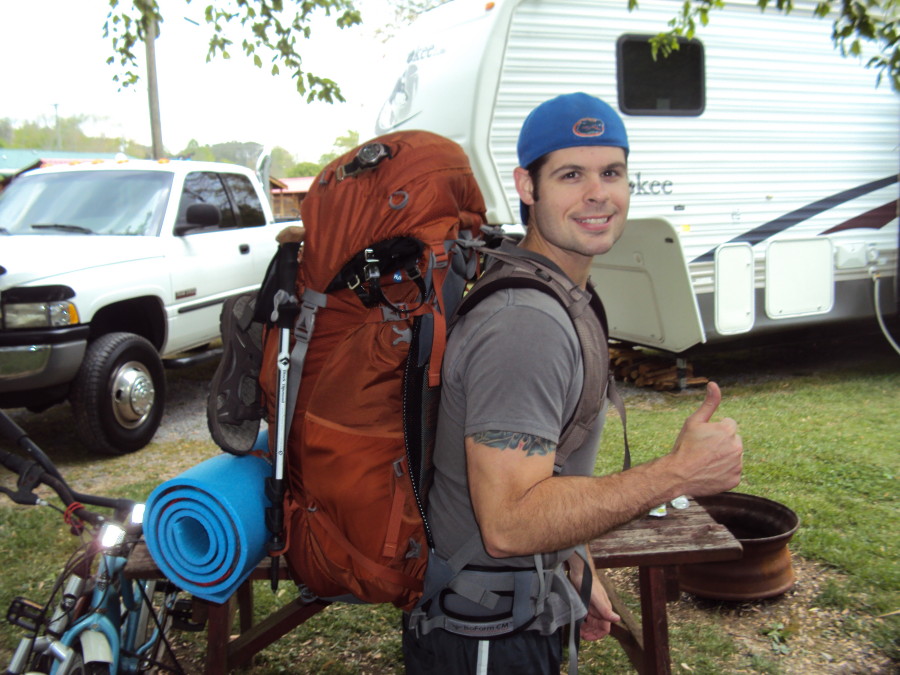 Loaded up and good to go

Day before my AT section hike of the Smokies

High hopes, but rather disappointed

I bought this as a light weight option for my back packing trips, as well as a 2012 attempt at the AT. Several flaws I encountered...
1. The lid is very tight (and more so when using, due to expansion of the metal during heating). Found you have to leave lid partially off so you don't spill dinner in process of just trying to check to see if your dehydrated dinner is boiling, as Tired and Frustrated found. I was only at 4000 to 6000 feet and that hindered boiling a lot. Can't imagine trying to melt snow at 13,000!
2. The handles ARE NOT LONG ENOUGH. When I started my pot a'boilin' the flames on my soda can stove were very close to handles, and they became very hot (natch). Used one of my gloves that I brought as a pot holder and burned my hand on flames trying to get pot off stove, and my glove melted to handle. That was a mess, while hungry!
3. The pot handles look good in the photo. They fold in on sides nice and neat and compact looking. HOWEVER they flop around, and while not a huge deal would think for $60 bucks they'd look and feel a little more secure, especially in your hand when you are removing your dinner from the stove and its as hot as the sun!

****UPDATE*****
I change my mind on this. I used this pot the entire time on the AT and it worked great. Nice and light and after a little use the handles and lid were fine. I will say that I wish the pot handles were a little longer , as even with the wind screen, they heat up from the flames of my alcohol stove. To combat this I brought a small pot holder that I had cut in half and stitched the cut end so it wouldn't fall apart. worked just fine. 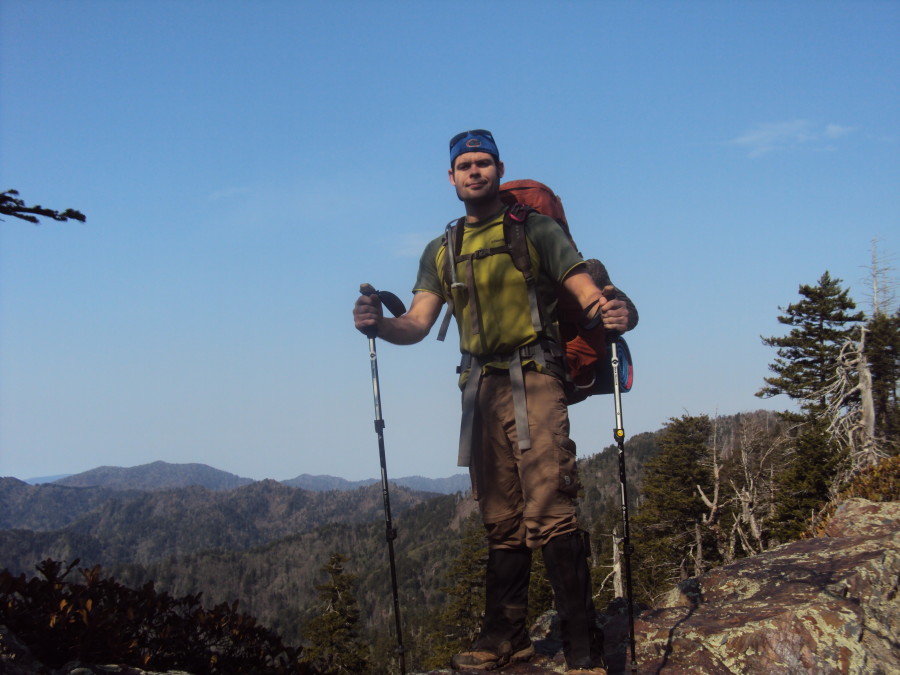 Used these gaiters everyday while hiking the AT through the GSMNP. Encountered all types of conditions including muddy trails, small streams (sometimes the stream was the trail), a little ice, rain and also sunny days. These things performed great. My socks stayed clean and dry (relatively speaking as my feet did sweat, naturally), and my pant legs as well. Not overly hot, even on the days we had lot's of warm sun shine with temps in mid to upper 70's. Very easy to put on and take off, and a very rugged design that should keep these things lasting for years. I'm 5'10", 165 lbs and my calves are big and the medium fit perfectly. Overall awesome product and well worth the price! 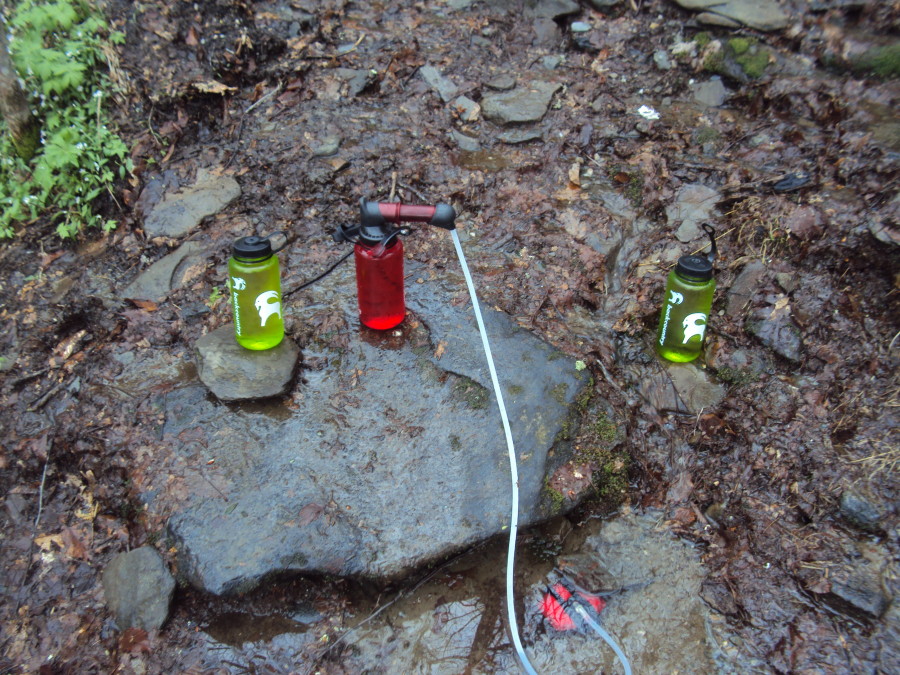 Christopher Hoodwrote a review of MSR HyperFlow Microfilter on April 26, 2011 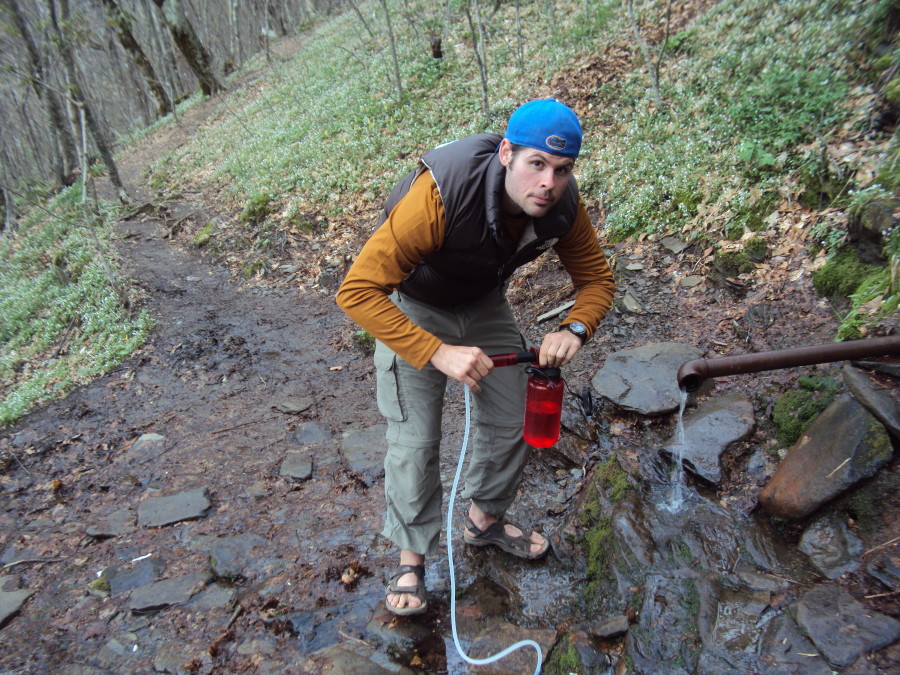 Just used this filter for first time and loved it!! Filters very fast! Used it between two people for 7 days and never gave us trouble. only had to backflush once. Although, I will say that all the water sources were crystal clear, so pretty sure that helped a bunch. Very easy to use and lightweight. You have to be patient when backflushing which is why I only gave it four stars. Takes a few minutes to start to pull water through filter when backflushing, but again, didn't have to do that much. Bottom line great filter and no fuss if your water source is free of debris and sediments. 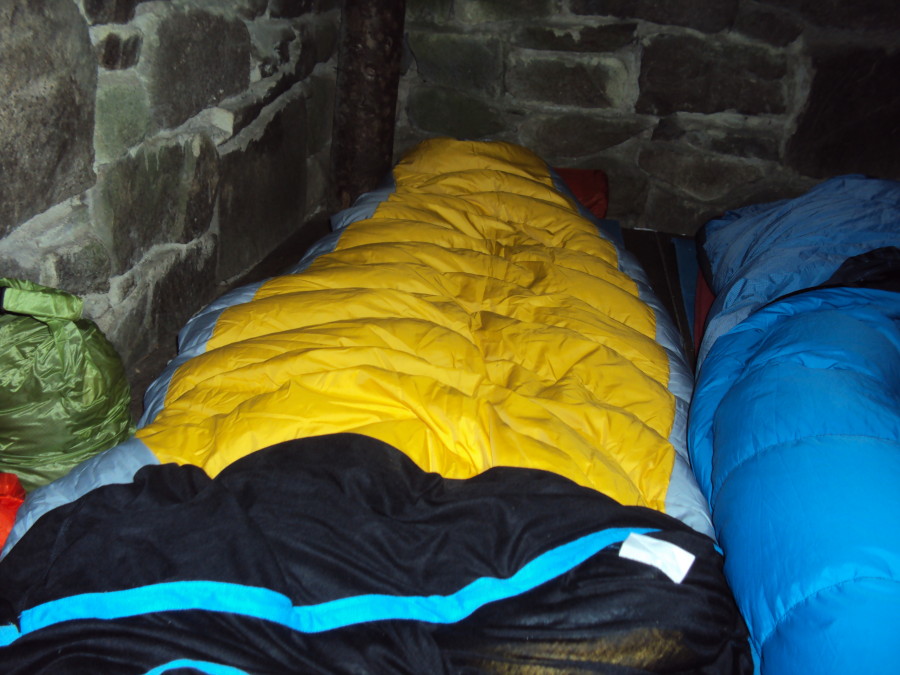 Used this bag on my recent trip on the AT in the smokies. Temps ranged from 30 to 55 degress F. Used the Sea-to-Summit Thermolite sleeping bag liner on the coldest nights and was quite warm. At 1lb 12 ounces it was nice and light. Would have been too hot in my Northface Blue Kazoo.

Thinking of getting this tent for my dad....

Thinking of getting this tent for my dad. He is is 6'2", 200 lbs. Do you think the interior height will be sufficient for his height and not feel cramped sitting up inside? Was also looking at MSR Hubba.

SOG makes the best knives! This is my second and came razor sharp. Much lighter than my SOG SEAL fixed blade knife, and will be better for backpacking. Nice and compact and at 4.8oz is a great weight for outdoor use. I purchased the half serrated blade model. I like having that cutting edge if I need to cut something thick or a dense material that might dull the blade faster. Fits in the hand comfortably and locking mechanism easily disengages the blade to close it up. Great knife!