Portland Design Works is no stranger to making cycling accessories for the urban cyclist seeking functionality above all else. Following this function-first philosophy, the Portland Design Works Daybot USB Tail Light offers two distinctive LEDs that keep you visible to passing traffic during daytime commutes and late-night rides to the local pub. Easily mount it to your seatpost or seatstay with the included mount and bracket. Best of all, the light's USB-rechargeable battery plugs into any USB port for rapid charging at work, home, and school.

The daytime LED is the brightest of the two lights and requires you to toggle through the settings until both LEDs light up. This mode gives you 100 lumens of pulsing light and 60 lumens of solid beam. Seeing less light is required at night, you'll find the night mode projects 20 lumens of solid, flashing, and pulsing light. It lasts much longer in night mode, ranging from 20 hours as a solid beam to an impressive 100 hours in the night pulse.

Not too much to say about this light and have no complaints. Does its job as it is very bright. The strap was strong and had no problems attaching to my bike and/or pack. 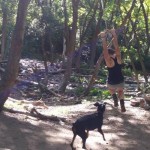 I bought this light to replace a workhorse LED tail light that I had used for two years. The light worked well for the week that I had it. I used the supplied mounting hardware and was somewhat concerned with how the light attached to the mount. My concerns were well justified today; with less than a week of use the light fell off my bike during a morning ride and was lost. Money down the drain due to poor design. I'm very frustrated!