Part of POC's Attention Visibility Interaction Protection (AVIP) series, the Ventral Spin AVIP Helmet comes in a Zink Orange colorway that practically screams to passing drivers, ensuring you're readily seen in poor lighting and along dark roadways. Besides its high-visibility color scheme, it's precisely the same helmet as the standard Ventral Spin, meaning it's the most aerodynamic, well-ventilated, and safest road helmet ever produced by the Swedish protection experts.

Its name takes inspiration from the guiding scientific principle behind the helmet's design: the Venturi effect. This scientific principle states that by constricting airflow in a choke point, the air pressure subsequently drops as it gains velocity. POC's engineers used this guiding principle to maximize ventilation by sculpting massive airflow vents in the front, which channel air inside constricted channels over the top of your head, then out from large exhaust ports along the sharp, trailing rear.

Please note, this particular helmet runs a bit small, so we suggest sizing up from what you'd normally order in POC's helmet size to get the proper fit.

Familiarity:
I returned this product before using it
Size Bought
M

Purchased two of these from Backcountry. One was made in 2018 and the other 2017! The fit is different on both than the 2019 POC Ventral I own. Both were priced as new retail. Both going back. Bummer but happy for free returns with Backcountry

I actually bought this because of the bright orange color and of the safety enhancements. Having ridden with it for four rides (about 80 miles per ride) I so enjoy the comfort and airflow through the helmet (my last 4 rides have all ended in the 90's!). It is a very light helmet which also adds to the comfort.......heartily reccommend!

Saved my life. Comfortable and SAFE

I bought the AVIP Ventral Spin in April 2018. Over the last year the color faded (see pics below), but the comfort and visibility were still fantastic. My cycling buddies could always find me on group rides and century rides with hundreds of riders. The air flow is really great. It is not as light as my MET Manta, but airflow is substantially better. Last week another cyclist turned into me on a group ride and down I went. I have no memory of the crash. I had a concussion and spent the night in the ICU with pelvic fractures, but my head is fine. No riding for a month to let my brain and pelvis heal up, but check out the pictures. I am happy to be alive and POC clearly have a helmet design with EPS in the right places and SPIN pads that do reduce rotational forces to reduce the chance of diffuse axonal injury. I already purchased a new one. I wish POC had a replacement policy in the USA. My head is 57 cm and the medium is a perfect fit. There are two subtle changes to the helmet in the last year. 1. The sunglasses garage color changed from black to white. 2. The chin strap cover changed from white to black. The white chin strap cover got dirty a lot. Get a safe helmet and consider Road ID. You never know. I wish I could post the other pictures of the helmet. 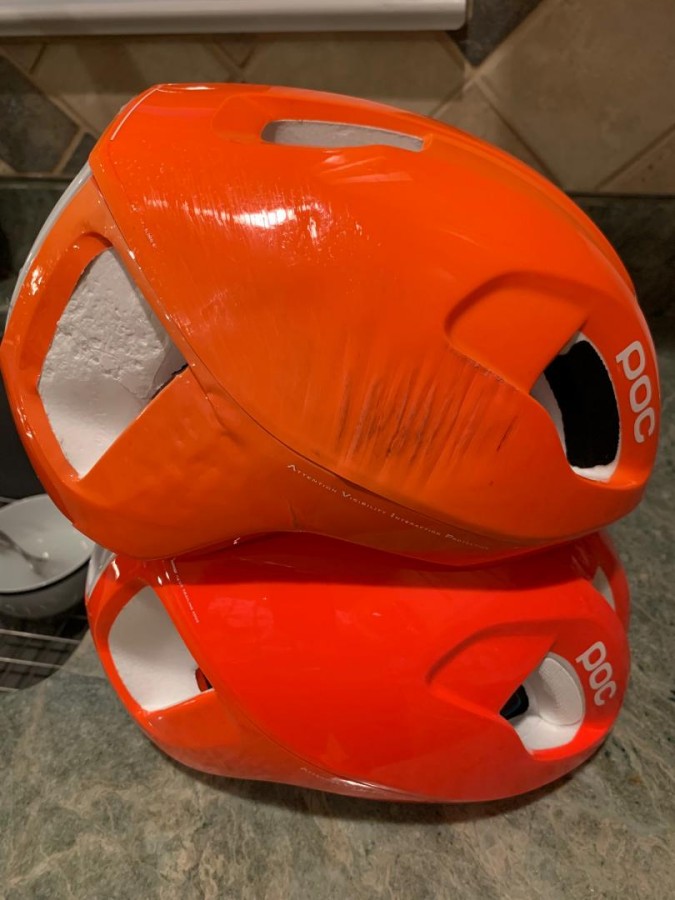 Just what I was looking for

I did my research, and this helmet is very safe. I've seen people riding with this helmet on and because of the vivid color I can assure you drivers can spot them very easily on the road. Besides been very safe, it looks great too.

good helmet? How long have you had it?

Light easy to see and very comfortable what more could you want. When on a bike it is good to have a helmet that can be seen easily. This is the perfect helmet.