To climb your best, you must climb with the best.

Prepare to take your climbing prowess to the next level when you climb with the lightweight, versatile, and highly convenient Petzl Contact Standard Climbing Rope. This sport-specific climbing rope boasts a 9.8-millimeter diameter in order to ease intermediate climbers into handling skinnier ropes without a hassle. Its EverFlex treatment stabilizes the core strands to provide an enhanced grip and consistent handling for many seasons, and an UltraSonic finish bonds the core to the sheath to eliminate frayed ends and improve the Contact's overall durability. Despite only weighing 60 grams per meter, this rope has a surprisingly strong impact force rating as well as the potential to handle big whippers up to seven times. The middle mark helps you identify the center of the rope quickly when you want to rappel off your successful sends.

I love this rope! Easy to flake and doesn’t get easily tangled, or curled/twisted on the lower. I love the 9.8 diameter, which makes it lightweight (great for hauling and coiling) and it feeds smoothly through a grigri. Sheath is super soft and makes handling for clipping easy. Haven’t fallen on my most recently purchased Contact rope, but in the past it’s always given soft catches with enough stretch.

I love this rope. It works great with all assisted breaking belay devices.. (Grigri etc) It feeds great with minimal to no kinkage when giving and taking slack. It feels great in your hands and handles really well when trying to make that desperate clip. Also it is really easy to flake out and won't leave you frustrated with a rat's nest of knots. It holds up great during a season and can take a beating.

Just got this rope and haven't been able to use it as much as I would like however when I took it out I was very impressed by it's weight and it's ease of use from clipping in to flaking between each climb.

The climb ready coil it has is a nice feature because I know I can just get up and go right out of the gate.

If you have any questions, feel free to reach out to me directly. 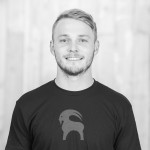 I have used this a few time and really like it. The rope is easy to handle, flakes easily, and runs smoothly through a grigri. I have used it indoors and sport climbing outdoors. The color is also fantastic - looks even better in person.

I gave this to my buddy as a gift and he absolutely loves it! He said: "This rope has been awesome! I went from a 10.1 Mamut and was nervous to move to a thinner rope but have loved it so far. This rope is easy to handle on the draws and anchors and flakes like a charm. Petlz does not fail to impress!"

I personally have used several Petzl ropes and think they are great quality. If you have questions about this rope or any other, feel free to give me a call or shoot me an email. 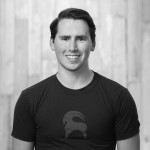 The Contact Standard Climbing Rope is one of my favorite Petzl ropes thus far. I like how supple it is, which makes belaying and coiling the rope a lot more enjoyable. The 9.8 diameter is perfect, and runs through the Grigri nicely when giving out slack! I also really love the light blue color! :)

I bought this rope to climb in the gym, and take on my weekend trips. I was surprised by how light it was compared to my previous rope. I use it about three times a week in the gym and on trips outside almost every weekend. It's been almost 6 months now and its not frayed on the sheathe at all. The climb ready coil is great for the first use after purchase!

I got this rope nearly 5 months ago, and it's been used usually several times a week since. It's been used for a lot of sport climbs, top ropes, trad climbs, and gym climbing , taken multiple falls on it (mostly small), and still a solid line. Sheath has definitely taken a beating, but other than minor fraying has held solid, and the core still feels good everywhere. Might be trimming it soon, but going on 5 months of use, that's not too bad. The middle marker is still clearly visible, and the stretch is a good for taking whippers - you'll feel fine after the catch. Having an electric blue rope means it's always easy to sight too, stands out great against, well, pretty much nature in general.

So overall it's a solid, reliable rope we've used for all types of climbing. When this one gets retired, I'm probably going to get another.

This rope is the worst i've ever owned. We took 4 belays on one end and the sheath pulled from the core 10-15ft from the end on the climber side. switched ends of the rope, took 4 belays on the other end and the SAME thing happened! sending it back to petzl so they can 'evaluate' if there's anything wrong with the rope. I'm irritated with their customer service and will never buy another Petzl rope. see photos. Remember, rope was brand new, taken out of the box the day we used it. 8 total belays. 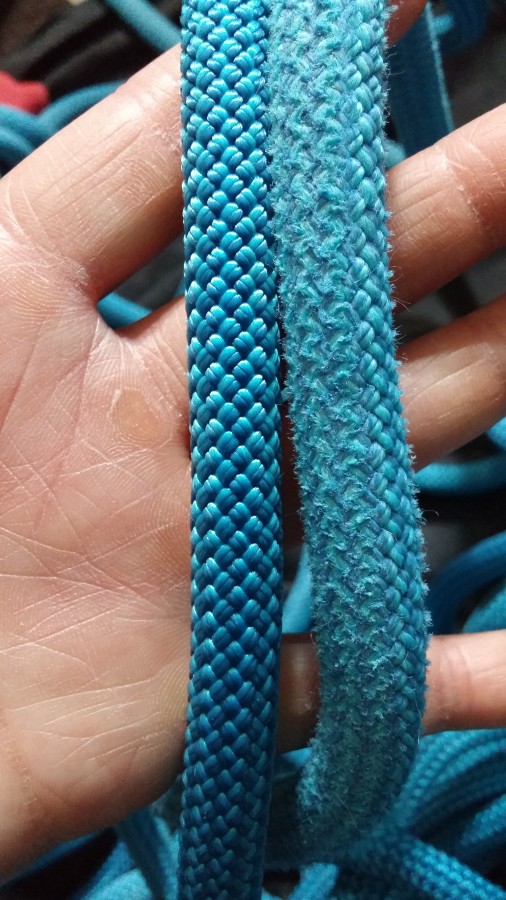 What did Petzl say?

Can't see it, but trust me it's there. 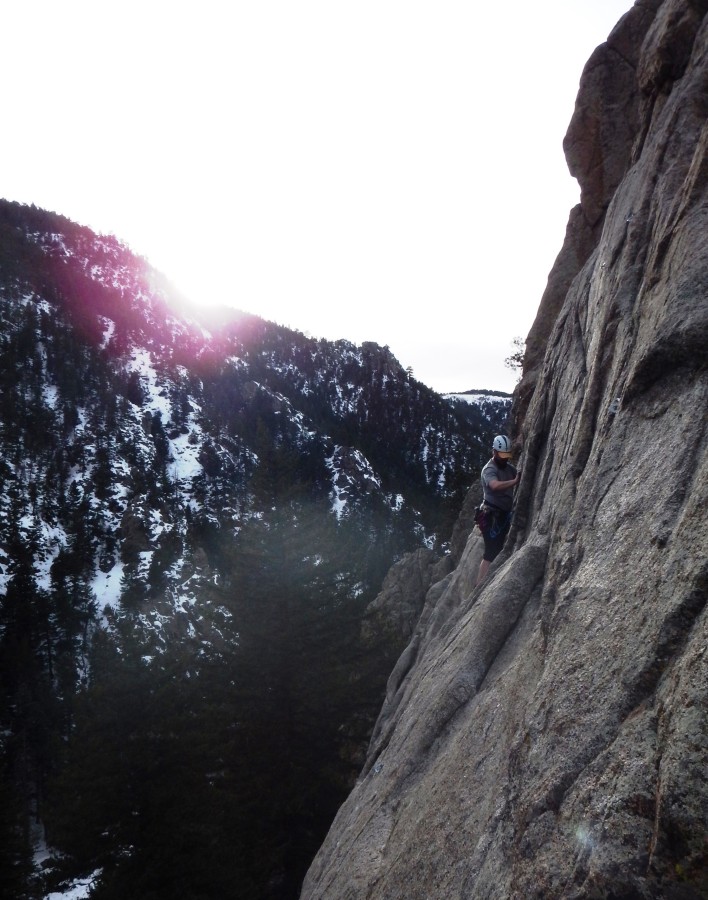 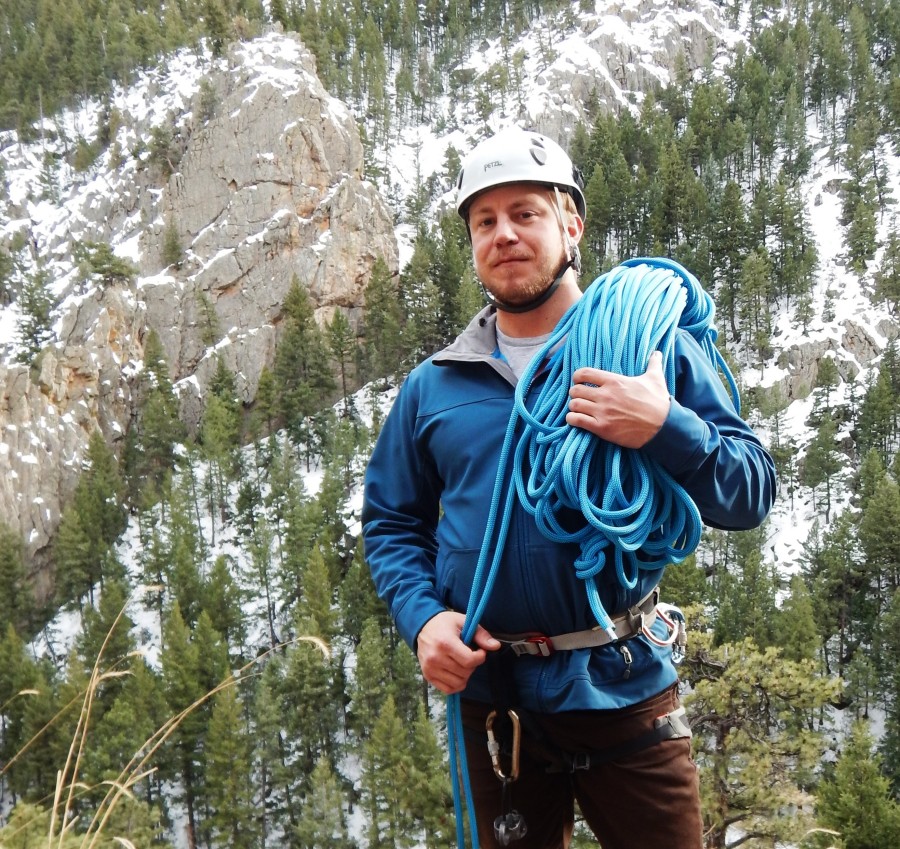 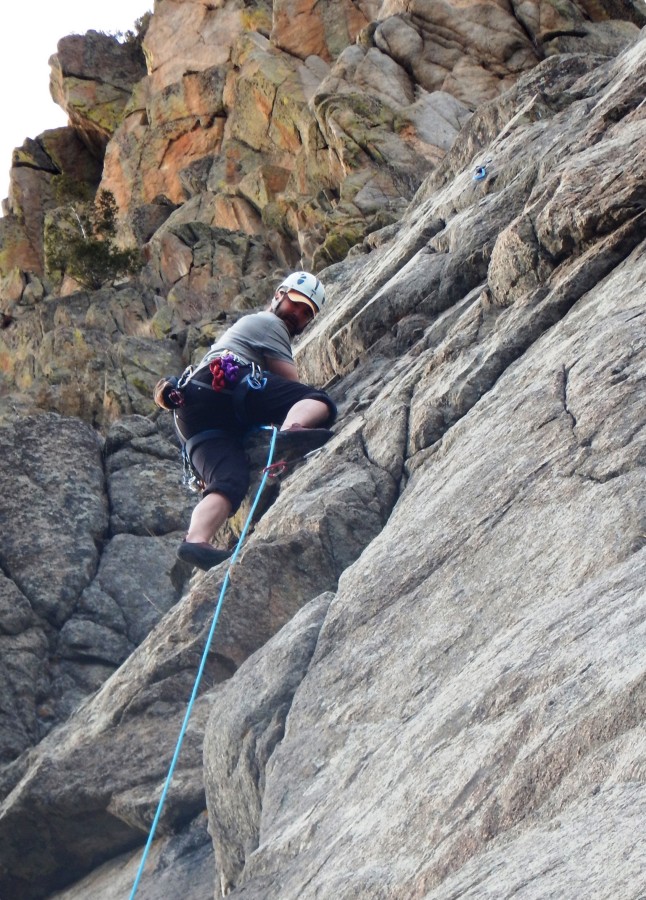 I've been thinking for a while about grabbing a 70m rope, so it was an awesome opportunity to do a review of one. Thanks to Backcountry.com and Petzl for allowing me to review this 9.8mm sport cord for the Backcountry.com community.

Probably the first thing you notice is the sweet color. It's electric blue. Right out of the plastic, when coiling and packing it, I could tell it has good hand. No stiffness at all and the sheath has a nice feel. I re-stacked and re-coiled it several times to get a feel for it over a few uses. It coils well and had a noticeable lack of twisting and tangling. For a 70m rope, it is surprisingly lightweight. I would bet that it weighs about the same as my older 9.2 x 60m.

Taking it out for its first run on some rock in Boulder Canyon, it performed as expected from a high-quality line. It knots and hitches solidly and unties easily. The cool color stands out well on the rock in Boulder. The half-mark is obvious due to the contrast of black on blue.

For lack of a better word, I would call this line a "noodle" - but that is a good thing - a property I really like in a rope. It is the opposite of stiff, which leads to very easy clipping. Even in difficult or awkward stances, I feel solid clipping this line.

I took a couple of forced falls in order to feel the forces. The rope has a nice, soft catch.

On the belay, the cord felt good through the ATC and had good grip in the brake hand. With such a nice sheath, I wondered how fast this rope would be on rappel. I think it was spot-on. Not too slippery, not too sticky. Also on rappel, I kept an eye out for any sheath slippage - but noticed none.

The only downside I've found so far is the bulk. This has nothing to do with this particular rope however. It's just a factor when carrying a 70m. Let's be honest though, it's a sport-climbing specific line. So how much am I really concerned with bulk?

After climbing, when packing everything back up, still no kinking, or tangling. I think the sheath really excels. I'm looking forward to taking this rope out a ton over the Spring and Summer. It's early in the game, but just from the initial impressions, I have a lot of confidence in the durability and longevity of this cord.

Is this capable of handling some rain?

Eric D.
Have an Answer? 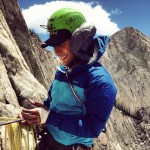 While this rope is not specifically dry-treated - like other ropes from Petzl and other brands, the UltraSonic finish keep a rain from completely soaking the core.