The Outdoor Research Sonic Balaclava uses a combination of WindStopper and Polartec Wind Pro fleece fabrics. Why use these two materials? Windproof WindStopper material blocks nasty weather and provides excellent warmth while the wind-resistant Polartec material over the ears allows you to still hear what's going on around you.
Learn more

Crucial in the Arctic

Used this balaclava recently in Svalbard, in the Arctic. Was crucial to not getting frostbite from -20C temps and intense windchill. The mesh mouth was great for not fogging goggles. Keeps the wind out no problem. Fits well underneath helmet also. Only comments would be the back of the neck is cut a little high and can be a little draft if you aren't wrapped up properly. Size is a little large so I wore a Small despite being a 6ft male.

5'8"' 170 lbs 7/ 1/4 hat size. Got a small. Hat portion fit fine. Face shield was huge. Big gap between my face and material. Wouldn't even stay up over my face. Just made a big pile below my chin. Second Outdoor research product I have tried that was defective.

Like it for its windproofness and warmth but it could be a bit better in my opinion - 1) Portion above the eyes sits too high and leaves the bottom of the forehead exposed. My other cheaper balaclava sits right above my eyes keeping my forehead warmer. This balaclava could be cut about a 1/2 inch lower to cut the wind bite right above the eyebrows. 2) The mesh over the mouth is a bit too open. When breathing through it the cold still stings. OK for moving when you are breathing deeply but bad for sleeping at night in the cold. Still I like and use it but it could be tweeked to make it awesome.

I have no issues with my sonic balaclava.Excellent cold wind protection,protection against breathing cold air.Nose hole-no googles gets foggy-unless you really hot and sweat.In that case-remove it and wear hat instead!Very good piece. I would like to compare it to the norrona's balaclava anyway.I'm happy with this sonic and I would recommend it to anyone. 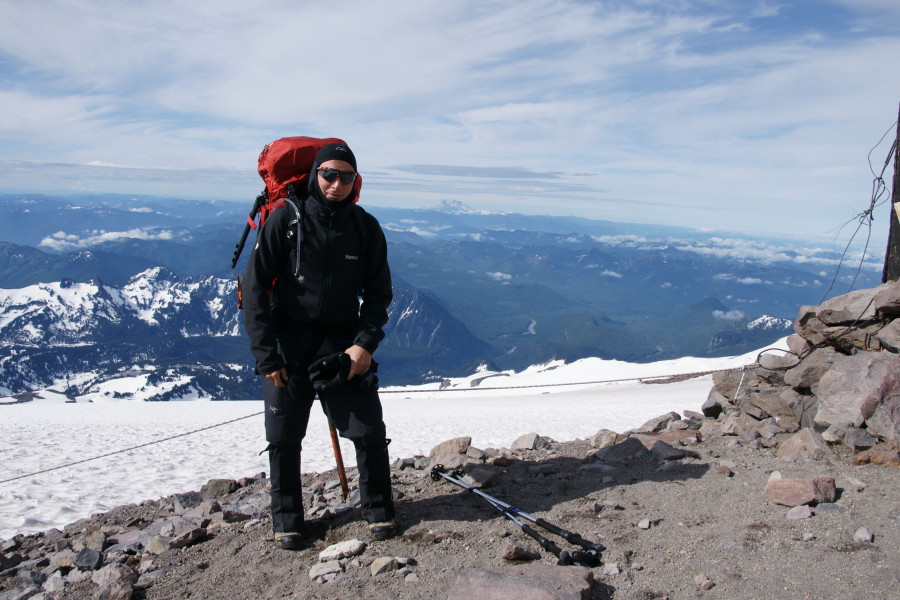 I was skeptical about how warm this would be when it arrived and I noticed how lightweight it is. I was fully expecting to have to layer it under a fleece beanie. I was pleasantly surprised at how warm this thing is. I wore it climbing both Mt Kilimanjaro and Mt Kenya, with nothing over it. The winds were 30+ mph and temperature was sub-zero Fahrenheit. My head stayed nice and warm and I still hear pretty well. The material over the mouth allows for easier breathing then the typical "ski mask" variety, but sucking wind at 19K ft, I still had to pull it down when I needed deep breaths. All-in-all, this is a terrific piece of cold weather equipment. (The packaging says you can also wear it as a beanie, but I found it to be too tight for that and wouldn't risk stretching it out to make it work. It's best used as a balaclava.) 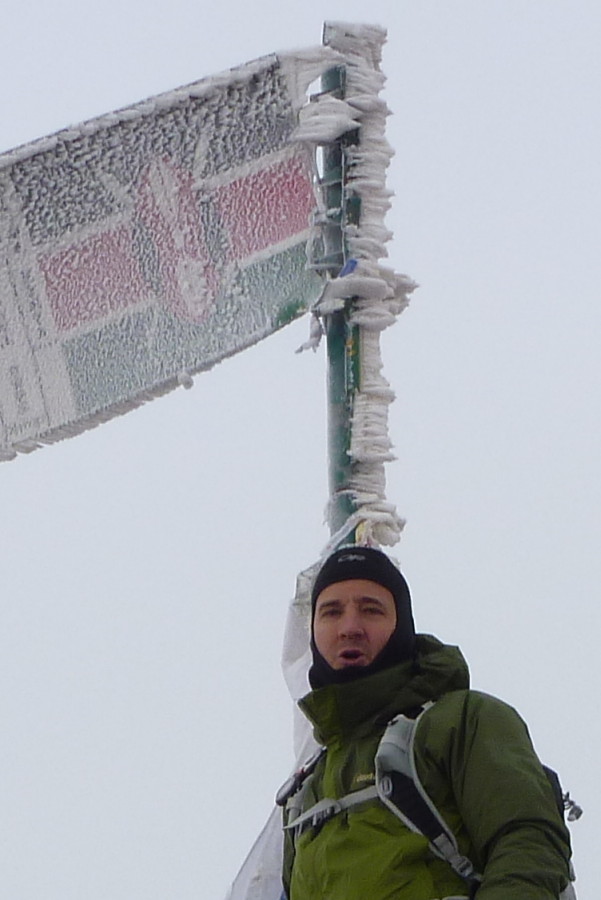 I purchased this balaclava specially for taking photos of the nothern lights at the Arctic Circle in February, based on other reviews. Although my head & ears were warm, the nose vent did not work for me very well & my glasses immediate fogged up, then the frost froze requiring me to pull off my glasses. Next time I will put goggles over my glasses before getting out of the vechile - maybe that will help! 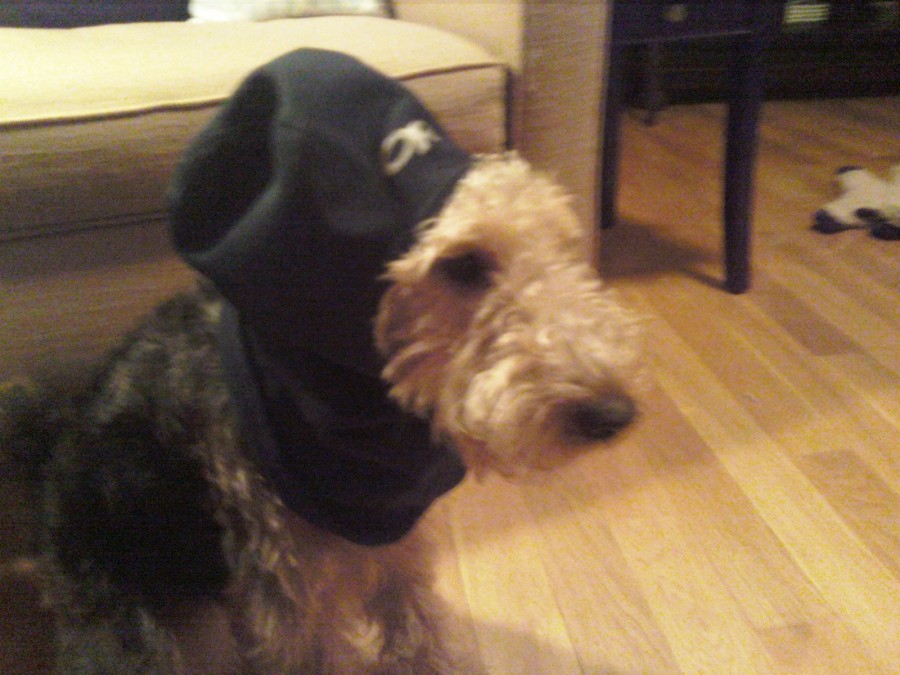 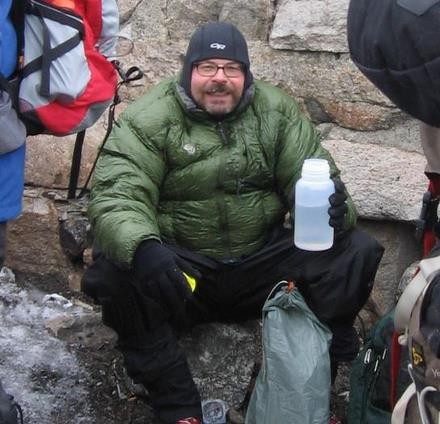 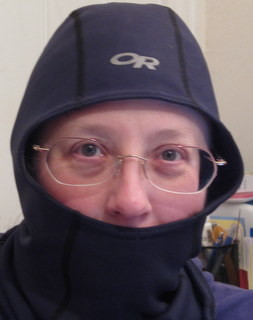 ummm, is this the same balaclava??? Where's the nose piece? and the face opening here looks much larger. 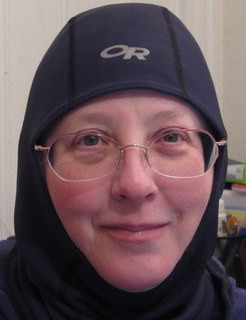 I own three thin balaclavas, this one, a Mountain Hardwear Power Stretch, and the Smartwool Balaclava. They're usually used for bike commuting in the winter, but they all do double duty on the trail. I bought this one to try and prevent my glasses or goggles from fogging up with every breath. It's hard to tell from the photo, but this balaclava has a mesh screen over the mouth like no-see-um mesh, and the nose hood is open at the bottom. This works great to keep moisture from your breath from coming up between the bottom of the opening and your face (fogging up eyewear), and is the real benefit of this balaclava. This keeps the front from icing up or starting to smell after just a few uses, something that happens with the MH. This feature also creates a problem; the mesh and nose hood do provide some warmth, but unfortunately not as much as the other two thin balaclava's I own. The WindStopper/Polartec fabrics work as well as you would expect from other garments you may own. Other than the face area the balaclava is very warm. It would probably be the warmest of the three if my lips and bottom of my nose weren't noticeably colder. While the separate ear fabric doesn't give me bionic hearing, I don't notice any more reduction in hearing than with the other balaclava, which is to say it's fine. As noted by another reviewer, it's plenty stretchy to pull the face opening below your chin, but the nose/mouth mesh make this awkward. The last flaw with this design might be due to the shape of my face. The mouth mesh makes up the bottom of the nose opening, and pushes against the bottom of my nose in a manner that's uncomfortable. I have to either deal with that, or pull the face covering down so that is rests below the bridge of my nose, which then smooshes my nose and makes it hard to breathe. If you've got a nose on the smaller side, it probably wouldn't be an issue.

Nice to have the nose hole because it decreases lense fogging. Your breath has a place to escape. I was expecting a much tighter fit. The eye hole can pull under my chin.

Bought two of these (me and wife) for cover-up while skiing and snowshoeing. Other reviews warned agains it. Bought anyway, and low and behold, they are all right! Returned! They are miss sized, runs way larger than stated. Mostly though, the material is sewn where the face opening is miss-alligned from the nose part, that, or our faces are! Get my point! The nose is WAY left of the face opening. Has to be a defect that they let slip through I am sure. The opening in the nose also is way too high and rubs. This would be a great item if they were custom made to fit our faces, which is to say they are a bad idea. Underarmor has a great alternative.

I had no problems with my Sonic Balaclava, I fit the small perfectly, as with my jacket hood I found myself to still be small despite the nearly perfect fit. The sides left a gap air could flow through on both sides when the mask is up. Other than that it certainly keeps my face warm. I chose this over the Gorilla Sonic to keep open as much around the eyes as possible. Waiting to get a Smith I/OS real soon and I'll upload pics of the Balaclava w/Goggle vs Balaclava w/Oakley EyePro.

I am very pleased with these balaclava. I have been using it under a Berghaus Gore-Tex jacket and if fits really well under the hood. I like the fact that the face opening is kinda large, makes it easier to pull the balaclava down under your chin when you want a better angle of view. It keeps me warm and does a good job of keeping the chilly winds outside. I even used it when I had to take my sailboat for a 3.5hr trip to get it to the winterdock. And it was rough day with windspeeds up to 40 mph and lots o sea spray. I will never leave home without it when I am out for a rough ride, be it snow or sea.

Everyone's pix in the review section shows only the face mask pulled down. It is hard to see if the item depicts the actual product. Is there that nose opening shown in the product image? Or is it just a regular piece of material that just covers the mouth?

Checkout "Ghost's" review below...he gives a very detailed run down on this balaclava and answers the question of the nose and mouthpiece construction; as well a general performance of this item! Good Job, Ghost!

I would go as big as possible - XL