How to Measure:
All measurements correspond to equivalent body measurements, not the dimensions of the garment. For best results, take measurements over your underwear.
Chest:
Measure under your arms, around the fullest part of your chest.
Sleeve:
Measure from the center of your back to your wrist with arms held out.
Waist:
Measure around your natural waistline, keeping the tape a bit loose.
Hip:
Measure around the fullest part of your body at the top of your legs.
Inseam:
Using pants that fit well, measure the crotch seam to the bottom of the leg.

Lightweight, stretchy, and breathable for your fastest runs, weather-resistant for unpredictable spring days—the Mountain Hardwear Kor Preshell Hooded Jacket has everything the dedicated runner needs to get out and enjoy those first days of muddy trails and snowless sidewalks. This performance-ready hoodie is made with Pertex Quantum Air, an ultralight ripstop fabric that balances air-permeability with weather-resistant protection, keeping you protected from light wind and rain while maintaining breathable comfort throughout your run. It's got a full-zip design that lets you control your levels of ventilation when the temperatures warm up, and when you decide that the day's gotten balmy enough to shed your jacket completely, you can stuff it into its own hand pocket and stash it in a pack or pocket.

This is a great jacket. It's supremely lightweight, stretchy, blocks enough wind, and folds up into nothing. Performance - it's 5 stars. The only thing that knocks it down is the peculiar sizing. I'm generally a medium in everything (shirts, jackets, layers), and the medium on this was super short and tight. Couldn't wear the hood without midriff and the feel the fabric pulling on my pits. While I prefer a slim fit, this was too tight for any type of later underneath other than a t-shirt. I wear this mostly as an extra later to block wind, so at times, I often will have a light fleece + a t-shirt underneath and the medium was far too tight. Went with a large, but there was a bigger gap in sizing than I was expecting. Not to say the large fits big, but it does fit a smidge boxy, but nothing to really complain about. All in all, a great layer with versatility for days.

Inseparable, but...defeated by a seatbelt!

I absolutely LOVE this jacket! I’m actually wearing it right now as I write this. As stated in my title, me and my Kor Preshell are almost inseparable. That said, sadly, the durability leaves something to be desired; the fabric suffered significant wear (and pilling) from a seat belt during a 2 ½ hour road trip, two weeks into ownership. I have worn the Kor during trail runs, cycling, and a few light hikes (no pack) in temperatures ranging between 65 degrees to the low 50s of which it performed superbly (remember, core temperature will be different for everyone). On one run, I got caught in a light shower and the Kor's performance did not disappoint. Despite the Kor's lackluster durability, I still reach for this jacket more than any other jacket in my collection, and I own many light high performance wind shells. This is primarily due to the cut, fit, fabric (feel), breathability, and stretch of the jacket - albeit not as stretchy as I would have liked. Speaking of fit and cut, for reference, I am 5’10 ½ ” with a fairly lean athletic build (around 156ish lbs) with broader shoulders than most and the medium (in Void color) is almost a perfect fit. I say “almost” because, while not a deal breaker, the hem (and sleeves) could do with another inch in length. Make no mistake though, the Kor has been one of the better fitting jackets I’ve owned. Ok, let’s talk about this durability issue and the marketed purpose of the jacket. While I do realize that any high performance fabric will at some point meet its match in the elements (and hard use), I remind you that my Kor was defeated by way of seat belt friction. And for the record, I drive a 2018 Jeep Renegade so we can rule out the whole deteriorated seatbelt theory. A lot of the Kor’s marketing is targeted towards rock climbing (“Big Alpine Routes” in description). The fact of the matter is that I have little confidence this jacket would hold up to even the mildest of rock climbing/bouldering, much less under the pack straps of an approach or summit pack, or even a running vest for that matter. Reviewer Gerbila123 mentions the same durability issues due to a lightweight pack. Also, while hand pockets can be nice, the featherweight nature of the fabric renders the hand pockets all but useless for carrying anything of weight such as a cell phone or headlamp - even a car key-fob will (in most cases) annoyingly flop around with any kind of tempo movement other than a casual stroll - I speak from experience. All that said, for some strange reason, my Kor has become my GO TO layer and now, due to it’s worn and pilling dodgy fabric, I reach for my Kor for almost every masochistic athletic endeavor in a bid to find its limits which has been satisfying to say the least and has surprisingly held up to much of the abuse. Would I purchase again, YUP! 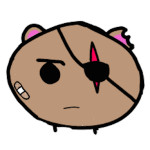 This preshell is great! It is super breathable and UV resistant so it functions well as an active piece on warm sunny days as a sun hoody. If you start to get warm in it it doesn't take much of a breeze to cool you down. It has a light DWR coating so if any precip comes through it beads light rain off surprisingly well. I've had it for summer and fall, its a great everyday piece for hiking, climbing, biking, anything you need some sun/weather protection. Stoked to use it come winter for touring!

Great active jacket, except for the hood

I really like these ultralight shells that are about 50% wind resistant, and the Kor is one of the best. It is stretchy, fits well, has arm gussets, pockets, and stuffs into a small package. I find the hood to be unusable, though. It's non-adjustable, you can't roll it up and stow it away, and it has so much elastic around the face that it makes me look like Kenny from South Park. It completely covers my eyes. I hope Mountain Hardware improves the hood for next season... the Marmot Air Lite is my favorite non-adjustable, but a single-pull adjustment would be great, too. Or, offer it it a jacket version without a hood. I would not miss the hood on a shell this light.

About to leave for Nepal and do the Everest Base Camp trek. Read a light windbreaker is what everyone wished they had brought. I have been wearing this the last few weeks during my training and love it! Super light, yet soft, packs small, surprisingly keep me warm.

It's not windproof so it breaths really nicely in more humid conditions or for running/hiking. It has a DWR so if its raining it will keep you dry until you get inside. Preshell is a perfect name as it's what you put on BEFORE you need to bring out the waterproof stuff that is great but is heavy/crunchy/expensive and just can't breathe as well as something like this... If you are looking for a jacket that you can wear 80% of the year for almost any activity this is worth checking out. The fabric, it's like butter. I've been running in it and hiking and it my new must have in my pack. It also weighs almost nothing, lighter than any hike/camp shirt and it's UPF 50 so I can ditch the colars/grandpa camp shirt stuff and use this as my exclusive sun management item as well...