Can't wait? Consider one of the other Ropes we have in stock.

Not too skinny, not too fat, the Metolius Monster 9.8mm Dry Climbing Rope gives you a safe, durable life line for everything from single-pitch cragging to alpine epics. The bright orange Monster middle markers let you know when you're leader's half way through his pitch and aids in identifying the middle of the rope while setting up for rappels. Smooth handling, easy clipping, and a light, compact construction make the Monster a cord you can depend on to handle several seasons of dedicated abuse.

Not as durable as I'd hoped

I bought the dry, 70m 9.8 Monster for the following reasons: 1) I wanted a thinner rope for sport climbing, but one that was slightly heftier and able to handle more force; 2) I wanted to be able to chop the ends multiple times and still have a working rope; 3) I wanted it to be dry for those rainy days and for the occasional alpine ascent. The rope lasted almost exactly one calendar year. During that period, it saw regular weekend (mostly sport) use for about six months (bouldered the other six months of the year), plus a two week trip during which it was used about half the time and included a Grand Teton late summer ascent (i.e. fairly dry). I honestly felt that it acted as a dry rope for its first wet outing. Afterwards, it repelled water roughly as well as any other standard rope I've owned/used. It was super stiff at the beginning of its life; by the middle, it was getting so soft that every figure-8 welded after one fall; by the end, it was downright scary. One fall would cause core/sheath damage. I guess I can't be too upset, as it lasted for one year of on/off use. I chopped the ends a few times, but by the end of that year, I had to chop an end after a single fall. One would hope that for the high weight of this 70m 9.8, it would be a little more of a workhorse. I won't buy this rope again.

The short story is that this is one the worst ropes I have owned, and have been climbing for over 20 years. In more detail, the problems are as follows: 1. Durability - I bought this rope less than 3 months ago, and in this period it has seen ~25 climbing days. Approximately 12m on each end have become very frayed (think of cats? tail), and consequently I have had to retire this rope. 2. Stiffness - out of the bag, this rope is very stiff. So stiff that knots must be very carefully tightened, or else they loosen. It became a little more supple with time, but not much. 3. Hard falls - It is my impression that this rope is not as dynamic as it should be. Several falls that I have taken and caught on this rope have been harder than they should have been. Let me emphasize that both me and my climbing partners are very cognizant of soft belaying practices, and I believe that these hard falls were not the result of poor belaying. In fact even simple ?boinking? on the rope (in order to get back to a draw after a fall) is unpleasantly jarring. On a positive note, the middle marker works well. I was skeptical at first and expected it to disappear. However, it is very visible and has held up nicely (though admittedly this rope had to be retired so quickly that this doesn?t mean much).

My daughter recently got into rock climbing. This rope was recommended to her as her first rope and has loved it. The red center marking is so much better than the black marks. 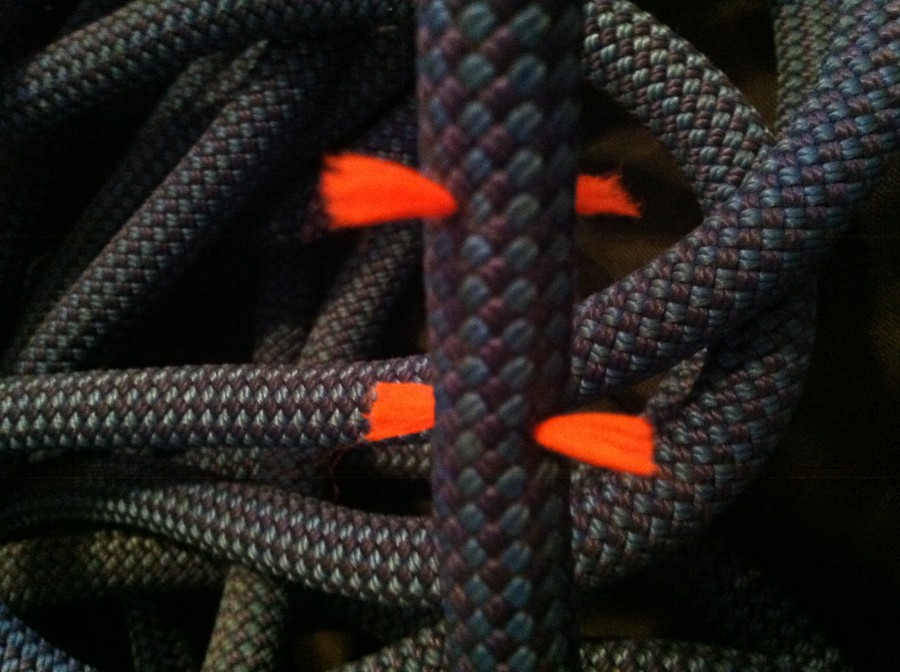 Just took this rope out on its first trip to City of Rocks and I'm super happy with it. It has a great bright orange middle marker unlike any I've seen - not like a black mark that's going to fade, and not the bi-color rope you pay an extra 50 bucks for. I chose the rope for its hefty 9 UIAA falls rating and was happy with the smooth feeling of the rope in my hands.

I have had about 5 ropes since I started climbing and this one is my favorite. For a couple of reasons. first off the middle marker is awesome since I can always find it. From past ropes the middle marker was useless since they always marked it with black on dark colored ropes so it didn't really help. Second is the durability. I have had this rope for the last 4 months and it has held up great. I bought a millet crystal rope which was dry treated on the individual strands and it just did not stand up or keep the water off my rope like the monster does. The one thing that it is missing is tapered ends which i did like on my crystal but the ends of the monster is holding up perfect but i did like tying in with tapered ends