How to Measure:
Measure around your hand at the widest point excluding the thumb.

When the Tahoe area gets snow like the season of 2017, you can’t help but want to get out into the backcountry. Marmot presents the Tahoe Undercuff Glove as an option for earning your turns without earning yourself a puddle of sweat in your gloves. The full leather construction includes a waterproof, breathable MemBrain insert and a DWR coating to shed any light moisture you may run into. Dawn patrol adventures can be chilly, but the light insulation will help keep the feeling in your fingers, and once the sun is up the DriClime Bi-Component lining will wick away any moisture your hands start to produce.

Love these. They are super comfortable and have good dexterity. Made well and warm enough to use on most days. 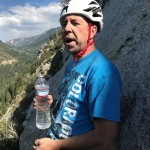 I picked up this glove late season to replace my Backcountry.com patroller gloves, which I accidentally left on top of the car driving out of the Snowbasin parking lot. And whoever picked them up hasn't had the integrity or been kind enough to turn them in to Snowbasin's Lost and Found for the last 2 months, which is unfortunate, as they were really great gloves, and when I went to get another pair, found out that Backcountry quit making them. I initially picked up the Basin and Range model that Backcountry is making in place of the Patroller glove, and they truly sucked, so I took those back after one use and picked up these Marmot ones (later season, there are pretty slim pickings for gloves at Backcountry in an XL and at sale prices) instead. I've used them 3 times skiing so far, in conditions ranging from low-twenties to low forties, snowing , rain, and sun (we had an interesting March and early April here in Utah, some good late season snow, so a chance to ops test them.) So far, they've worked surprisingly well. They are not a form fitting glove, so not the greatest for dexterity purposes, but they were soft and comfortable from the start, but run a little large and roomy which adversely affects their dexterity (which in my view, is a negative). They have been warm but not overheating in the conditions described above, and maybe that's the magic of the DriClime lining. I would say the greatest strength of these gloves is how easily one can take them on and off, and they slide up undercuff of my shell sleeves easily. My initial thought was to use these as my spring and warmer ski day gloves, as my backup glove when my Swany's haven't dried out from wet and snowy ski days, as well as some colder weather work gloves (when good dexterity is not required.) But I have been surprised, given that they are a roomier fit, how they seem to regulate temperature well so far in the conditions described. They have shed water well so far, and after a few wears, I gave them a coat of Niqwax once I decided to keep them. So a pretty decent pair of gloves all things considered. Something of note, the sales guy helping me at Backcountry told me that there were at least a dozen other customers who had come in like myself who expressed extreme disappointment that Backcountry had quit making their Patroller Glove, so add me to the list of customers who would like to see the Patroller Glove brought back into production. I'd give this glove 3 stars, gets the job done, but with a few cons.