Mammut made the Kento Guide High GTX Boot for classic mountaineering and hard hikes in any season. Gore-Tex gives rugged waterproofing against winter weather, and is comfortably breathable in the summertime when you're trekking in higher altitudes. The upper is mostly nubuck leather for long-lasting durability, but there's a bit of 3D memory foam around the heel for a customized fit and enhanced mobility. Underfoot, the Kento Guide has a dual-density midsole for shock attenuation, a PU wedge for stability, and  Poro wedge for support. Vibram's Hexa Tech rubber includes a heel insert for crampons, and large lugs ensure proper traction on anything the mountain throws at you.
Learn more

I compared this boot to the La Sportiva Trango Tech GoreTex and chose the Trango Tech GoreTex for my style of climbing but still wanted to give these boots a great review. (Everything was tested from the comfort of my living room and stairs I was unable to afford both boots and needed to return the one of them). It was a rather difficult choice, but I needed to replace a pair of heavy mountaineering boots that were crampon compatible as my foot seems to have grown, (at 57 my foot has grown from a 43 to 45.5). Both boots were very comfortable but a bit long in the toe box (typical for narrow European feet, and maybe my feet haven't grown but just gotten wide?). The Mammuts have a higher ankle collar (nice for keeping scree out of the boot) and are a bit stiffer due in part that they have leather uppers. The Mammuts have a traditional lacing system with metal lacing hooks whereas the La Sportivas has a Perlon loop at the second to last lacing. (I see this as susceptible to failure over time requiring repairs) Both accepted a Grivel G-12 Crampon-Matic easily and seemed to front point well when tested on a wooden block. I felt that the Mammuts might be slightly warmer in colder snowy conditions but was indeed heavier and bulkier. The Mammuts feel more like a traditional mountaineering boot whereas the the La Sportivas felt more like a performance climbing shoe that would perform better in cracks and edges once I got on the rock. Both felt as though they would be extremely comfortable on the approach and last for many years. I only wish I could have purchased both boots. Oh, and I really loved the Red! 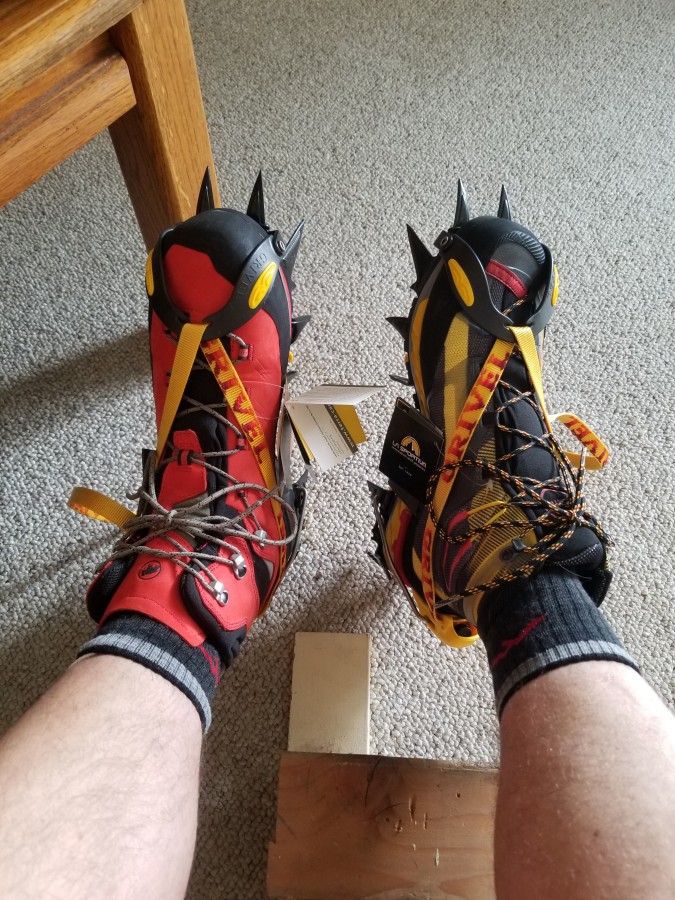 You should just wear them like that. What a trend !