How to Measure:
Measure around your palm at the widest point excluding the thumb.

When Mother Nature takes cold temperatures and tosses wind and precipitation in the mix, reach for the Louis Garneau Proof Gloves to keep your hands toasty. Designed to handle wet conditions, these gloves are made from a blend of thermo-laminated spandex and neoprene on the outside and a micro-fleece lining for a touch of extra warmth. Thinsulate insulation traps heat to keep your fingers warm without adding bulk.

The Proof Gloves feature a PU leather palm so your hands won't slip off the hoods or brake levers. Padding reduces pressure on your nerves, while the X-Vent design helps wick moisture and promotes temperature regulation. The double cuff design includes a spandex inner cuff with a hook-and-loop strap on the exterior to seal out cold and moisture. A micro-fiber thumb offers a comfortable way to wipe away sweat or ice accumulation when you're working hard, and reflective elements increase visibility in low light conditions.

I was hoping for a better product from LG, but my expectations failed me after less than a week of use. This is a very minimal protection against the cold, and still allows moisture in through the thumb, because the thumb piece is covered in a fleece material, rather than the waterproofing on the rest of the it. I can't say anything about the durability of the gloves, but at least thus far they have held up against the abuse I've put them through. As one of my team's sponsors, I genuinely hoped for a better results from LG, but unfortunately I will be returning to the Backcountry outlet soon to purchase a pair of Giro Proof's instead. 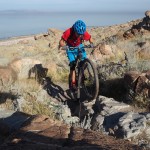