Ready for anything winter throws at you, the Hestra Vertical Cut CZone 3-Finger Gloves provide waterproof, windproof, and breathable protection in a warm, durable package. The 3-Finger design adds dexterity for gripping your ski poles, or snowboarders ratcheting down their bindings. A tough, yet flexible construction ensures these gloves last more than one season, while the G-Loft insulation prevents cold fingers from cutting your day short. A leather palm grip holds firm on ski poles and boot ratchets, while the adjustable pull straps and neoprene cuffs do their part to prevent frigid gusts from sneaking in.

I purchased these gloves from Backcountry after doing a ton of research on where I should invest my money for the best pair of gloves. I decided to go with Hestra after speaking with several Backcountry gear heads who had personal experience with the brand and said they were the best gloves ever. I felt guilty spending $140 (I got them for 20% off) on a pair of ski gloves, but I was willing to try them out considering their reviews from the gear heads and also that the gloves have a lifetime warranty. I figured they would be the last pair of gloves I buy for at least 20 to 30 years. I also bought them because I read about Hestra and read about the company being owned by a family in Sweden and that the gloves are made in Sweden. I liked the idea of supporting manufacturing in a small Swedish town. When the gloves arrived I tried them on and had a really hard time getting them on my hand because of how tight the wrist cuff was made. I ordered a size 10 which I thought would have been large for me. I measured my hand like the website said to and the circumference of my hand was between a 9 and 10 so I went with the 10. The 10 ended up being too small. My fingers were at the very end of the glove tips. I think I would wear a hole in the fingers if I wore them much. Also the circumference of the glove was too small. I barely could put the glove on. I wear a size large glove for Kimberly Clark latex and nitrile lab gloves, most other gloves I wear size large. Size 10 in Hestra is considered extra large and that was too small. My dad has the exact same size hands I have and I had him try the gloves on and he injured his thumb and stopped trying to put them on because he has arthritis in his thumbs from an old skiing injury. The sizing for these gloves seems to be inaccurate. I've considered reordering these gloves in a size 11, but the thing that really made me think I'm giving up on Hestra is the fact that their website talks about the town of Hestra where the gloves are supposedly made, I thought I was getting a glove made in Sweden for $170. When the gloves arrived the label said they were made in Vietnam. That really let me down. I was really surprised to see that after reading all about the company on Hestra's website that they offshored manufacturing to Vietnam. I'm not planning on giving Hestra another chance. Other gloves I considered on Backcountry.com were Black Diamond gloves, but those only have a 1 yr warranty and are expensive for such a short warranty. The glove I wish I had tried was Backcountry's own branded glove that was on sale for $40 normally $99 I think. It comes with a lifetime warranty even. People say it runs small, so I probably would have to order a few sizes and return the ones that didn't fit, especially after the problem with Hestra's sizing. My search for the best glove continues, but it won't be a Hestra. 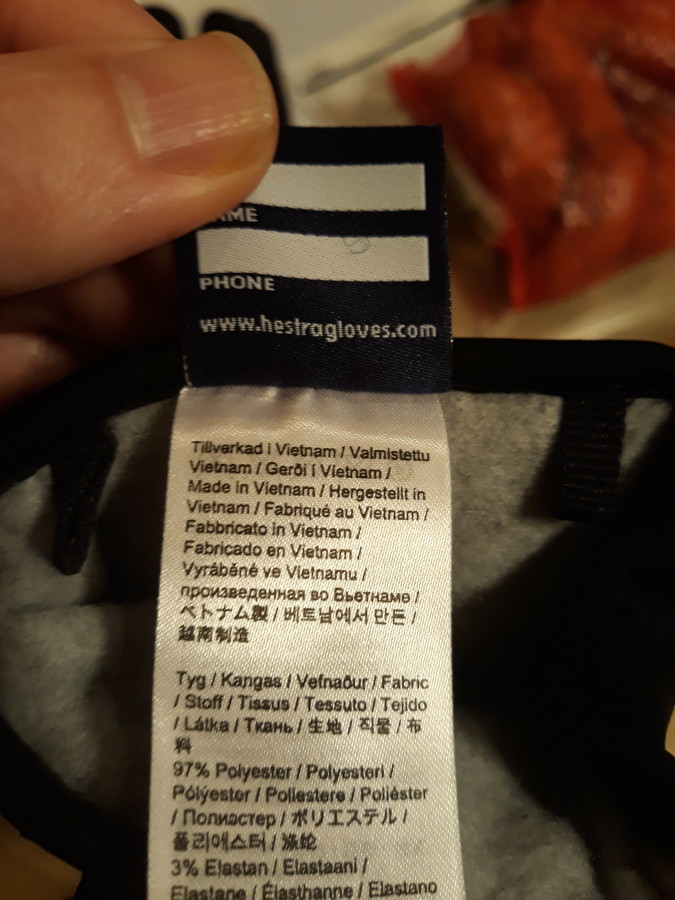