Styles Added to Our Winter Yard Sale — Up to 50% Off

You've had it with the traffic, the commute, the alarm every morning, and you need a week long break out in the backcountry. You head out the door to leave civilization behind with your gear, supplies, and the BCX 675 Waterproof Backcountry Boot. You're going to go really remote through some demanding terrain to access the yurts and cabins you're going to be staying at and you need something that can get you there safely. The Hinged Polymer Cuff offers front to back freedom of movement while providing remarkable side hold for safe ski guidance through difficult terrain. The Injected Exterior Heel Cap provides you with robust protection and heel cradling for extra security. Nothing would ruin your trip faster than slipping your cold, wet feet in and out of your boots every day. Thankfully, the BCS 675 has an integrated gaiter with a sealed zipper that keeps all moisture out. Those, with the waterproof Triple-F membrane ensure you have warm, toasty, dry feet.

When you've arrived at your first yurt, rejoice in the absence of city noise and easily slip out of your boots with the Easy Entry Loops. You map out the rest of your trip and realize you have several long, difficult days ahead. No worries though, with Fischer Fresh your boots will stay odor free and keep a pleasant feel inside. The next morning you head out for day two to find deep, fresh powder. Simply attach your gaiters to the boot with the handy Gaiter Ring for extra protection. Strap up your boots with hook-and-loop closures at the ankle and cuff for extra support so you can plow through the fresh stuff with ease.

My FISCHER BCX 675 Ski Boots that I bought from Backcountry.com via Amazon in Feb 2017 are now defective. I have only had them about 2 seasons and I did not use them much last season. The issue is that both boots now have a serious crack on top of the toe of the boot. The cracks must have happened while the boots were in my garage during the off season. I contacted Fischer who said to contact Backcountry who said the warranty is 2 years so I am out of warranty. I got the we are sorry but there's nothing we can do routine. In my experience Fischer does not stand by this product and they hide behind the reseller. You would think for a defect like this there would be some pro-rated compensation on a replacement boot. That conversation never started. I guess they think that it is ok to buy new ski boots every 3rd season. What else am I supposed to believe? Buy Beware. I will try to attach at least one picture that show the defect. Last time I did this I lost all the text in my review. 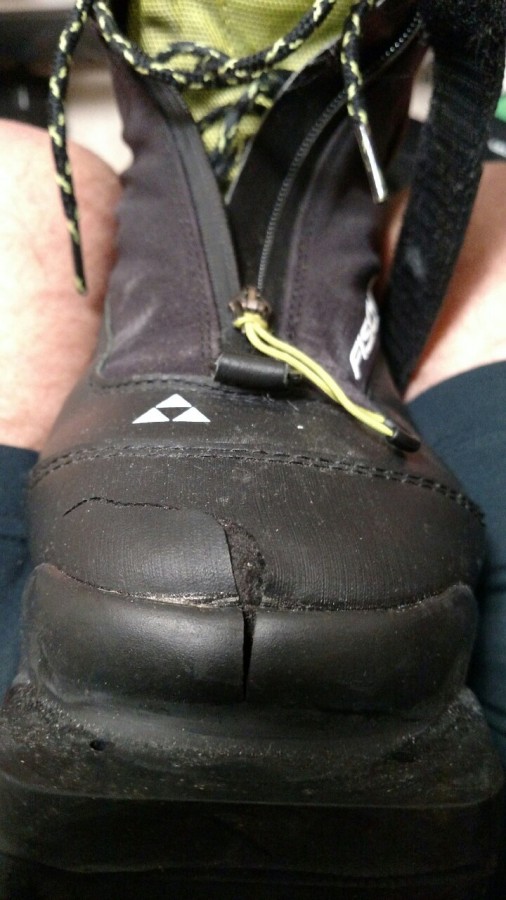 Mine didn't even last one season with moderate use. One boot cracked exactly the same way while skiing. The other cracked the same a few skis later. Fischer was terrible to deal with on getting it covered by warranty, plus I had to pay for shipping. There is a defect in the toe design that causes the vertical crack. Jerz.

On closer inspection, I found broken stitches on the BCX 675 boots I just got (see pen inserted in gap). I have not used the boots yet, so it's a manufacturing defect. The boots are made in Indonesia. Fischer should move its production to Romania like so many other ski boot makers. I haven't seen slip-shod sewing on Romanian-made ski boots. 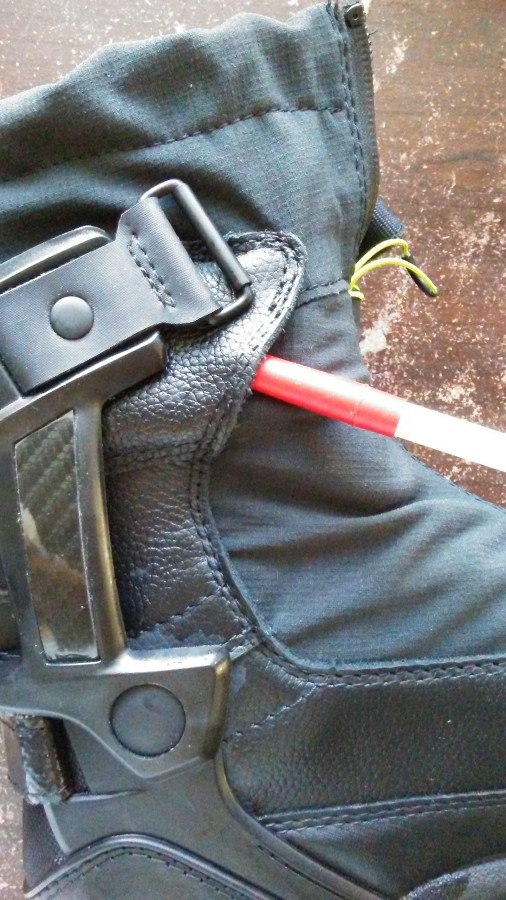 I haven't used the BCX 675 yet; I just bought it from Backcountry. But I used the NNN-BC version, the BCX 6, heavily this past season (2018-19). The gaiter drawstring broke on both boots. For the BCX 6, which I bought locally, the drawstring broke as soon as I pulled on it. The BCX 675 I just got had a broken drawstring right out of the box. Fischer is not tacking down the ends of the drawstrings adequately, or not at all. It's like the sewing needle missed it. So the drawstring just pulls out of its tube when you tug on it. For both boots I've resorted to a kludgy fix rather than return them: I pulled the drawstring back through its tube and hand-sewed a small button on the end of the string so it wouldn't pull back out. That fix worked all season on the BCX 6. A worse problem is that stitches have been breaking on the BCX 6. I started noticing broken stitches early in the season. By the end of the season, the boot was still holding together ok and not leaking, but I can foresee taking the boots into a repair shop at some point. I anticipate the BCX 675 will also break stitches, but I won't know until next season. Fischer clearly needs to use tougher thread, like an upholstery thread. Despite these issues, I do like the BCX boots. They are comfortable. And the BCX 6 gave me good control of the Fischer Excursion 88 skis I used them on last season, and it was aggressive use - plenty of steeps through trees.

I bought a pair of these boots. Why do the duckbills have these two holes on the topside? 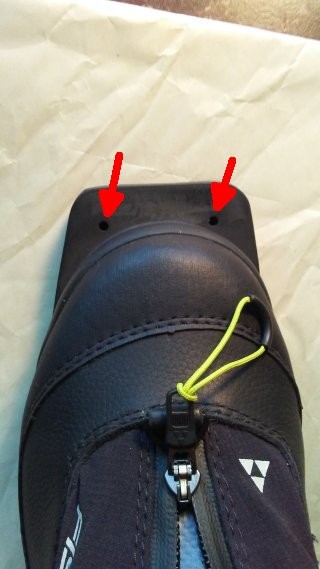 BC thinks the holes might be there to give the duckbill extra flexibility.