You are Backcountry: Dropping!

You are Backcountry: Dropping!

Backcountry.com’s online community encompasses a passionate group of wanderers, adventurers, Gearheads, and athletes. Get the rundown on the raddest happenings within the backcountry.com community in You Are Backcountry, your connection to the best product reviews, photos, and videos submitted by our athletes, our employees, and you.

In this installment of You Are Backcountry we’ve compiled the best community-submitted images of planks poised to drop rowdy lines, untracked powder, pillow fights, or AK spines (if you’re Backcountry athlete Ian Provo). Take a deep breath before you plunge headfirst into this curated collection of #goatworthy ski lines.

Without wasting any time, let’s get to some gratuitous shots of backcountry.com athlete Ian Provo slaying a bit of Alaskan spine on his Armada TSTs.

Next, Ian gives us a little insight about sending his Armada Magic J Skis down a favorite pillow line (named after an ED drug whose name we won’t say to keep the suits away) in Retallack Lodge, British Columbia.

“It’s a classic pillow stack that I’ve been fortunate to hit almost every year when we do our annual Armada Skis photo shoot at the lodge. It never gets old!”

This is the stuff of legends. Thanks for the submissions, Ian!

The Armada Magic Js have certainly been slashing some decent turns this year, as we also find them strapped to the boots of backcountry.com Gearhead Brian Mehregan. That foot of freshness in a secret stash at Snowbird Ski Resort was slain by the jaws of his hungry lion.

Our own backcountry.com Advertising Program Manager Than Volk  was scheduled to fly home for Christmas on December 22nd, 2013. A storm-related flight cancellation meant he got to spend some quality time with the goat and his Atomic Automatics instead, exploring the Eagle’s Nest area of Alta Ski Resort. Free refills!  And yes, he did make it home in time for Christmas.

Community member Phil M. uploaded this image of the Rossignol Soul 7 to give us a little representation on the East Coast. Phil is shredding the North Face Slope at Seven Springs Ski Resort in Pennsylvania. Phil reports a fantastic season this year in the Northeast with some resorts reporting more than double their average annual snowfall. Shred on, Phil!

Montana-based snow slider William has the following to report on his 192cm Solomon Rocker 2 skis:

“Obviously, these skis are the bee’s knees in powder, but they are equally great in less-than-ideal conditions. They can plow through chopped-up powder and crud almost effortlessly and can tackle big landings and high-speed straight-lines with ease.”

On the left, Michelle wielded the Atomic Century in South America last year while touring in Bariloche, Argentina above a zone she calls Little AK. “I decided to try to lighten up my touring setup, and these skis performed great! With more sidecut than the Millennium, the Century performs well at the resort, but is also a very versatile ski; as you can see I’m dropping into a long pow run, and I was stoked to have these on my feet!”

On the right, Michelle sports the Atomic Millennium while filming with Matchstick Productions in Whistler. Michelle reports: “The Millennium has been my choice ski for filming. If there is one ski that I would travel with, it would be this one. For powder, cruising resort, touring, all of the above … I love this ski.”

Backcountry.com athlete Andrew Whiteford delivers a rowdy segment straight out of Jackson Hole, riding his Line Influence 115 skis. This edit isn’t for the faint of heart, but if you yearn for huge airs, pillow fights, and straightlining chutes, then take a look.

On the other side of the pond, Community member Jochen powers his Head USA Turbine 125 Skis on the backside of a ‘nice peak’ near Innsbruck, Austria. Jochen has the following to say about this particular moment:
“It was a day where you don’t expect a lot, but to be rewarded with such nice conditions after a short hike was amazing … looking forward to doing that run again.”

Gearhead Ali F. and her buddy Drew are surveying a line on the Upper Cirque at Snowbird Ski Resort just above the venue for the Swatch Freeride World Tour freeskiing competition. To read what it’s like to compete in a qualifier for this event, check out Rebecca Gerber’s account of her first FWQ. You can read Drew’s review on the Nordica Helldorado ski here.

We realize that this collection of slobber-worthy lines has probably whetted your appetite. Thus, we’ll finish with a sushi fest atop this Dynafit Cham 97 ski, courtesy of Brian Smuda. And if you really want to end with a bang, we suggest following that link to check out Brian’s profile image. It’s legendary.

3 Simple Ways to Improve Your Skiing on the Fly 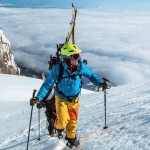 haha, cause its hard to get a sick photo of a gnarly line from the park. Great article Lexi!

@ Reid! We love boarders just as much as 2-stickers. Unfortunately still having problems activating the shredding community! Not enough boarding pictures to sustain a board-specific article. I'm still hunting though! It can happen!

That gentleman Bryan reports that he works in a ski shop and the picture actually depicts the FIRST Dynastar Cham 97 ski to touchdown in the USA from the European Rep. WILD! 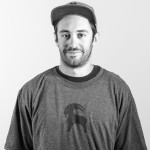 And Whiteford is a BEAST 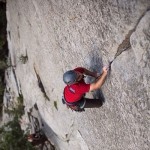