Air Travel with an Airbag Backpack

Air Travel with an Airbag Backpack

Avalanche airbag packs are unlike any other safety tool in a backcountry skier’s arsenal. Pull a handle and, in the blink of an eye, you increase your chances of ending up on top of a slide instead of underneath it. The very same technology that enables this survival advantage makes this safety tool unique in the eyes of airlines and regulatory institutions. We distilled the information from airbag manufacturers and airline regulations into a short guide for traveling with an avalanche airbag pack on planes.

If you read nothing else in this article, keep one thing in mind:
The safest way to travel with an airbag pack is to fully discharge the unit at home before you fly. Many manufacturers suggest this, and in most cases, you can’t fly with a charged cylinder or an activation handle, anyway.

You’ll need a basic understanding of your system’s cylinder type and trigger mechanism in order to be able to navigate the ins and outs of airbag airline regulations.

As of December of 2014, the majority of the airbag packs on the market are based on one of two types of systems. For the purposes of this article we’ve categorized them in this way: 1) refillable, compressed-air systems that use mechanical triggers, and 2) sealed-cylinder gas systems that use high-speed pyrotechnic triggers. In both systems, the cylinder stores the propellant needed to inflate the airbags and give you lift, and the trigger or handle initiates the inflation.

There’s a third type of technology that has recently come on the market. Black Diamond developed its JetForce technology in collaboration with PIEPS; both companies offer backpacks that include it. JetForce technology abandons traditional canister deployment systems in favor of a lithium ion battery-powered jet fan. Since the system is rechargeable, it eliminates the cost of expensive canisters and refills, and it gets rid of the added hassle of trying to travel with compressed air or nitrogen. This means zero-hassle travel. If this sounds good, you can stop reading this now and start shopping.

Every manufacturer provides the information you need to determine which type of cylinder you have, what your cylinder is made of, and whether the cylinder is US Department of Transportation (DOT) approved or approved by the European equivalent to the DOT.

It’s important to note, however, that some refillable-cylinder airbag systems also accept sealed cylinders, and some metal cylinders can be replaced with carbon-fiber versions. Small changes in cylinder type or material may mean a big change in whether or not that cylinder is allowed onboard a plane.

While DOT approval means that a cylinder is approved for ground travel, it doesn’t necessarily mean it’s approved for air transportation. You’ll interact with two major sets of airline regulations while traveling between the United States and Europe: the United States TSA and the European IATA. Each regulatory commission maintains lists of items restricted for both carry-on and checked luggage, based on its own security justifications. In general, the most restrictive guidelines dictate what can and can’t be carried onto a plane, while checked baggage is given more latitude. Traveling within the respective borders of each of these regulatory commissions is often easier than crossing them.

Because airbag packs were introduced to the European market in the late ‘80s, European airline regulations are more progressive than those of the United States. Currently, the IATA allows the transport of a single pack containing one charged gas cylinder and a single trigger mechanism containing less than 200mg of explosive substance.

In the United States, the TSA is more restrictive. For compressed air systems, all cylinders must have an opening that the TSA can use to inspect the inside of the cylinder. TSA prohibits the transport of any ‘charged’ cylinder (live or filled cylinder) as well as the pyrotechnic contained within the activation handle of an ABS pack. However, due to the non-explosive nature of their triggering process, mechanical triggers (like those in BCA avy packs) are not prohibited.

As always, the IATA and TSA set regulations that the airlines must abide to, but the airlines are free to independently impose further restrictions (The Canadian CATSA leaves it up to the airlines entirely). It’s always wise to contact your airline ahead of time to ensure that you have the most up-to-date information regarding items restricted or prohibited by the airline you’re flying.

Discharge the system, leave the handle in place (it’s mechanism-based, not pyrotechnic charge-based), and remove the cylinder from the unit before you repack the air bladder(s). Since this cylinder is reusable, you’ll want to take it with you, but first you’ll need to remove the cylinder lid and pack the lid and the empty cylinder in a clear plastic bag for screening with your carry-on luggage.

Once you arrive at your destination, cylinders can be recharged at a manufacturer or dealer location, or you can go outside your dealer network to find a SCUBA diving store, paintball store, fire station, or other facility capable of filling a high-pressure air cylinder. Just be sure that you are clear on how to reassemble the system once you have a full cylinder.

You have several options:

Research your options before you go, and determine if there is a dealer/rental/refill facility available where you are going (after locating one online, follow up with a phone call to ensure that it carries what you need). This may determine whether or not you need to order in advance and have it shipped to your destination.

Download the data table for your pack. This provides information about the operation of the unit, the materials used in the unit, the regulations and engineering guidelines met by the unit design, and more. Taking a few minutes of printing could save you a lengthy discussion at the airline check-in counter or security checkpoint about your gear.

To check, or to carry on? In general, checked-baggage restrictions are more forgiving than those for carry-on luggage, and since the checked-bag screening process happens behind the scenes, there’s a potential you could save yourself some time at security. On the other hand, you are not there to personally explain what the unit is and how it works. Note that if you own a compressed-air system, you’ll definitely want to carry on and declare the discharged, opened, and empty cylinder and lid. Should there be any question of the cylinder’s use, this will allow you to explain fully and in person the nature of the cylinder.

Why You Need an Avalanche Beacon

Staying out of the Headlines: Multiple Avalanche Burials 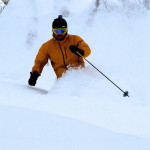 So as an update. I took my fully charged Black Diamond JetForce through security as carry on at both SEA and LAX on the weekend. Not a peep from TSA; they didn't even pull it off the belt. #winner

TSA has gotten much more strict recently. Had my mammut canister (empty of course, with all paperwork) confiscated at jackson of all places. Most compressed air canisters have openings that are too small for anyone to really look inside and that is their current argument for prohibiting them. I used to be able to explain and probe the inside with a wire to satisfy them, but that hasn't worked recently. I'll be shipping the canister to my destinations from now on.

Travelling with my ABS has become a whole heap harder in the US in recent years. The TSA folks at LAS made me blow mine last time I went through before they'd let me put it on the plane. Obviously I did the full dog and pony show and had them call the airport police to notify them I was going to detonate an explosive in the terminal.... but even that didn't deter them. The girls from Southwest.com thought it was a right hoot.

My Jetforce order is currently showing 'Picking' status.... let's hope BC.com can get it out the door to me soon.