What is a Plus Bike, and is It for You?

by Garson Fields
posted by

What is a Plus Bike, and is It for You?

Mountain bikes have been evolving constantly since their inception, but the pace of development over the past few years has picked up appreciably. From changing trends in wheel size to serious advancements in frame geometry and suspension, it’s hard to keep up.

So naturally, there’s a great deal of confusion out there about Plus-size bikes. You’ve probably heard about them by now, and maybe seen a few on the trail. If you’re unsure if you want one, or even what they are, consider this a quick primer.

What is a Plus bike?

The short version is that a Plus bike has tires that are bigger than traditional tires and smaller than fat bike tires. These tires are found most commonly on 27.5 rims; however, Plus tires also exist in both 29-inch and 26-inch formats (more on this later). The representative width is typically a 3.0 (as compared to 1.6 to 2.6 for ‘standard’ MTB tires), but they can range in size from 2.6 inches to 3.2 inches.

The Purpose Of Plus

The idea is that larger tire make a bike easier to ride. Unlike the majority of standards introduced lately, Plus isn’t intended to replace tires of a more traditional width. Rather, they’re offered as an alternative because the handling characteristics are different enough that some riders, especially those new to the sport or those looking for a more forgiving downhill experience, will prefer them.

A wider tire boasts a larger contact patch (the amount of tire in contact with the ground at a given time). Momentarily ignoring the impact of tread design and rubber compound, this means that a Plus tire will provide more traction. Traction is further enhanced by an ability to use lower tire pressures, typically in the range of 15psi. The upshot is that the tire can conform more easily to the ground, aiding traction and a sense of surefootedness. It’s worth noting that despite the similarities with a fat bike, Plus bikes are not intended to be ridden on snow, which differentiates them from a true fat bike.

Wider tires require the use of a wider rim to keep the tire stable under load. Most of the complete Plus bikes at the moment seem to run rims with a fairly large 40mm internal width. They pair better with ~3.0 tires, lending more stability and maximizing tire volume. The narrower end of the spectrum seems to be roughly 35mm, which seems to be the ideal size for tires in the 2.6-2.8 inch range. For comparison, standard 27.5 rim widths run anywhere from 19 to 30mm.

You may see some new bikes that are being marketed as “Plus-compatible.” In theory, this means that you could run either standard or Plus size tires on them. However, keep in mind that the larger Plus-size tires actually won’t fit many “Plus-compatible” frames, so it’s best to check recommended tire sizing from given frame manufacturers.

Ultimately, the easiest way to get into a Plus bike is to buy a complete bike that comes equipped with Plus tires. That way you’re assured component compatibility and the peace of mind that comes with factory support. However, for the tinkerers among us, it’s possible to convert many bikes to a Plus-size arrangement, although it’s far more involved than simply mounting bigger tires to your existing bike.

What allows for Plus compatibility on some bikes is that, in many cases, the outside diameter of a 27.5 Plus tire is nominally similar (typically a few millimeters smaller) than the outside diameter of a traditional 29-inch wheel. In other words, assuming that your frame and fork are wide enough to accommodate Plus size rubber, you may well be able to mount up a 27.5 Plus wheelset to your 29er without significantly altering the geometry. The same can be said for converting a 27.5 inch bike to 26 Plus, although 26 Plus is admittedly far more limited in terms of availability. And there’s another caveat, namely that the added width of a Plus tire can encroach on space typically occupied by the chain, especially for those not running a one-by drivetrain.

That said, it’s worth double checking tire diameters, because some of the smaller Plus options (such as the 27.5 x 2.8 inch Schwalbe Nobby Nic) have an outside diameter only slightly larger than a standard 27.5 tire, making it a less-than-ideal choice for converting a 29er.

Converting is more work than buying a complete plus bike, and it requires some research to ensure that your older bike is in fact Plus-compatible, but it’s an option that plenty of riders are already experimenting with. That makes reliable information easy enough to find for those willing to search.

While a Plus bike can absolutely enhance confidence, it is not without shortcomings as well. The easiest to quantify is weight. Between the added rubber and the wider rim, a Plus bike will be heavier than a comparable offering wearing traditionally sized tires. Similarly, you can expect some added rolling resistance, and while many manufacturers claim that the difference is very slim, the fact remains that the added rubber and lower tire pressures contribute to a loss of efficiency.

Perhaps the biggest issue is the hardest to quantify; namely, that traction doesn’t mean the same thing to everyone. Remember the claim that Plus bikes have more traction? Well, that’s true when the bike is upright, such as climbing or braking. Lean the bike over into a corner at speed, and that extra tire deflection tends to smear the tread across the ground, reducing traction at the very moment that it’s most necessary.

Basically, while a traditional tire has less freedom to deform, that added resistance helps to drive the tire’s side knobs into the ground, which is essential for developing cornering grip. You can counteract this tendency by running more air pressure, but you quickly sacrifice climbing and braking traction, and end up with a bike that’s just heavy, without being able to enjoy the Plus platform’s benefits. Admittedly, this isn’t an issue for everyone. If you tend to steer through corners, it’s unlikely that you’ll ever notice. However, if you are racing or simply prefer to lean into a corner and drive the front wheel, you’ll quickly find that Plus tires can be more of a hindrance than a help.

The Ibis Mojo 3 Carbon X01, a new addition to the growing Plus category.

Plenty of riders are good candidates for a Plus bike. The most obvious are those presently riding fat bikes on dirt, but want something faster and more responsive. Alternatively, Plus can also be a sound option for riders who are newer to the sport, especially those who are after a bike that’s fun and easy to ride. But you don’t have to be a beginner to appreciate the added uphill traction and forgiving feel on the descent; Plus bikes can make for a super fun ride for anyone regardless of experience.

That being said, downhill racers and really aggressive riders may not be the best candidates for the Plus platform. That’s not because Plus bikes can’t be ridden aggressively (they absolutely can) but because the platform offers fewer benefits and some significant drawbacks for these riders, as noted above. But they may want to keep a spare Plus wheelset to swap out whenever they want to change things up.

As always, if you’ve had experience with the platform, let us know what you think in the comments!

Seven Things to Know when Buying a New Mountain Bike

Recent testing by bike radar, and anecdotal evidence from GMTB indicate that plus bikes are actually statistically faster for many common types of terrain, BR actually showing lower rolling resistance for fire roads. As a physicist, I doubt your description of why cornering would be less effective with a plus bike, and my experience with a Trek Fuel EX 8 27.5+ and a Trek Fuel EX 9 27.5 is that the plus bike holds the corners better while leaning. I believe that it is common knowledge that fat bikes, and to a lesser extent plus bike are more effectively turned by leaning than by steering due to the tire width, much like motorcycles. I am not sure of this last point, but it would lead to the bikes with wider tires not being as nimble as those with normal tires, which is also consistent with my experience. I also believe that we are starting to see some plus bikes on the racing circuit. Either way, most of the guys I ride with, whether they own a plus bike or not, agree that they are great fun.

Hey Ryan, when it comes to riding in snow, bigger is better. Lighter riders can get acceptable results with Plus tires in snow if they air down and stick to firm groomed trails, but that approach is still going to be lacking when compared to a true fat bike. 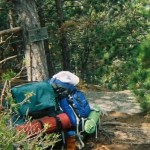 Could a plus tire bike work in the snow instead of a fat bike? Could be a nifty way to use one bike year round; 3" in the winter, regular size in the summer