There’s epic, and then there’s Epic. In my ten years of racing downhill, I’ve seen the term overused to the point of meaninglessness; however, I can comfortably say that the 2014 Whiskey 50 mountain bike race presented by Epic Rides in Prescott, AZ was, as promised, Epic in every way. And I feel no shame admitting that, for me, it was in the not-so-good sense of the word (aka Type II Fun).

For me the ordeal, uh, experience started two weeks before the start with a casual, “Hey, want to go race 50 miles?” Our “civilian” entry in the amateur division of this annual event had just withdrawn with a late-season ski injury; I just happened to be sitting in the line of sight of a Backcountry.com events coordinator and thus fielded the invitation. I’m not usually one to say “no” to a bike ride, even though at this point in the season I don’t even think I’d even ridden 50 miles on a road ride (it was the closed roads and snow, I swear), let alone spent more than an hour or so on a mountain bike. “Sure,” I said, “why not?” It’s only a bike ride.

With only two weeks to work with before the race, real training wasn’t an option. I put in a handful of days on the road bike, making sure to get some climbing in, and only three days on the mountain bike. With such short notice, and very little time on the bike, I spent my spare time stretching and going through a few yoga routines to make sure I’d be comfortable for the four- to five-hour ride, which was my number one concern. Even with a lack of preparation I was still feeling quite confident in my ability to finish the race and possibly do well. This sort of thing was nothing new to me; most of my longer, so-called “epic,” rides have been spontaneous, with maybe a day or two notice before crushing multiple canyons or gaps that I’d never ridden before.

A few weeks prior to the Whiskey 50, a quick photo shoot left me “training” on the amazing trails in St. George, UT.

Packing for a race in Arizona may seem pretty straightforward. Shorts, bibs, helmet, and a couple extra water bottles to keep you hydrated in the desert, right? While out on my last “training” ride I received a heads-up from Jonny A., our sports program manager, about some adverse weather scheduled for race day. The forecast was calling for 40- to 50-degree temps and a bit of rain with a possibility of snow at the higher elevations. But this didn’t really deter me; growing up racing downhill bikes at Plattekill in New York’s Catskills, I was used to mud and snow at both the opening and closing of the season. With this news I added a couple items to the pack–extra pairs of gloves and my Mavic softshell jacket. I figured the softshell would keep me warm and dry without going overboard with warmth. After all, I was going to Arizona …

The forecast that greeted me when I woke up on race day had shifted towards colder temps and frozen precipitation, but a quick look out the window revealed a drizzle and moderately moist soil conditions. I went through my usual pre-race routine: a big breakfast (lots of eggs), small cup of coffee, and a bunch of last-minute tweaks to my bike’s ergonomics and shifting. I skipped the warmup as I figured that would be a good use of the first three miles of road riding in the race.

Making some last minute adjustments before lining up for the race.

Taking off from Whiskey Row in downtown Prescott was quite a start for a race. With probably 500 people lined up it was a slow-going start, but spirits were high and everyone was smiling despite the unknown conditions ahead. After a few turns the pace picked up a little, and it was time for me to make my way towards the front of the pack. Knowing my capabilities on the singletrack and descents, my plan was to get within the first third of the field before hitting the trails to avoid getting stuck behind other riders. I was pretty sure I’d able to achieve that little goal I set for myself, but it wasn’t enough to avoid the inevitable slow crawl resulting from the wide range of abilities among the riders.

The next four to six miles of singletrack and climbing were slow going with little room for passing, and this is where the weather started changing for the worse. The rain turned to sleet and then eventually snow as we marched our way up the climb. Surprisingly, the trail conditions held together and didn’t become too slick as we started our traverse across a ridgeline at 6500 feet before hitting the first descent. But the exposure on the traverse was brutal. With little protection, we were hit by snow that was flying sideways, and the consistent side wind kept things interesting. During the next descent I was able to make my way in front of two slower groups of riders. To me this was a blessing; sitting in the caravan riding my brakes in the snow and freezing temps was next to unbearable. With open trails ahead of me, my spirits picked up and I made the best of the descent, turning small rollers into jumps and letting the bike slide around the snowy turns. It was a riot.

The end of the first descent was also the first of three aid stations. Riders ahead of me were hopping in and out of spectators’ cars to warm up, and locals were helping the first wave of racers who decided to bail out with directions back to town. I used this opportunity to warm my hands under a truck’s exhaust before changing gloves and making the two-mile climb to the first feed station and the turn to the Skull Valley section of the trail, which makes up the larger portion of the 50-mile ride.

That food-and-water aid station ended up being the last stop on my ride. Slightly better weather on the climb and a ream of Oreos were almost enough motivation to start the second descent, but when I hopped back on my bike the skies opened back up and the snow started all over again. Recognizing that I had nearly lost control of my hands on the first descent, I couldn’t see the fun in carrying on and decided that dropping out was the safer move. I got directions from one of the volunteers helping out other racers who’d made the same decision. Thankfully, after just two pedal strokes two locals showed up in the truck and volunteered to give a few of us a lift out.

When we arrived back in town we heard rumors that 40 riders were suffering from hypothermia. The organizers eventually evacuated the race, and riders were turned around at the Skull Valley split to avoid any further safety issues. So there it was, about 14 miles into the race and it was over. It was definitely not my proudest moment racing, but one of my smarter decisions for sure.

Knowing When to Call it

Hypothermia-inducing conditions are a great reason to call it quits, but making a decision like this is not easy, especially when you have a strong competitive desire to stick it out and finish. My best advice for anyone else stuck in a similar situation is to listen to your body. I knew how I felt after the first descent, and with two extremely long descents ahead, the future of my race was looking more than merely unpleasant. Even if I’d been able to avoid frostbitten fingers, there was still the issue of keeping a grip on the bars. In sub-40-degree temperatures (not to mention 19-degree, snowy weather) you’re not only uncomfortable, but your control over your bike is usually hindered. Ultimately, if your safety’s at risk, it’s time to call it.

The ride of choice for the race, the Merlin XLM, in all its glory post race.

But then again, there’s nothing like failure to fuel the fire. So I’m writing this next bit as my formal request to the Backcountry.com powers-that-be: I’d like to race the Grand Junction Off-Road. The Whiskey 50 would have been my first 50-mile mountain bike ride, something that’s definitely on my bucket list … so how about it? Grand Junction? It could be epic.

What’s in the Pack: Essentials for All-Day Mountain Bike Rides 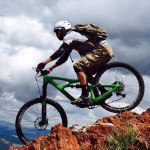 We're proud of you Daryl!

My friend and I did this race the previous two years. We were both there telling ourselves "this was the one to miss." The weather was one of the worst in the history of the Whiskey. The guy that one the race was riding a single-speed. I thought that was pretty cool. Anyways, yes, health is the most important thing, save the body to race again another day.

You're a champ Daryl!