by Lexi Dowdall
posted by

Chris Rennau is a Montana-based freeskier and a team athlete for Liberty Skis. He has attempted to huck the infamous Class 6 cliff at Big Sky Resort on three separate occasions piloting his trusty Liberty Helix Skis. We were keen to learn a bit more about how he manages fear in the face of such an extreme feat.

Chris, before we launch (pun intended) into your infamous attempts, tell us a little bit about Liberty Skis. What makes them different from other ski companies?

Liberty Skis, based out of Avon, Colorado, has been in business since 2004. Liberty incorporates a bamboo core laminate in all their skis, which gives them stiff flex with a solid, predictable, and poppy ride. I’ve been working with Liberty since 2005 and the product line continues to exceed my expectations as they develop. Liberty is a small company making a big impact in the ski industry. What’s really important to me is Liberty’s core values and commitment to the environment. Wind power is used in the manufacturing process and the bamboo harvested for the core regenerates much more quickly than the wood used by other ski manufacturers.

Watching some of your runs at Big Sky Resort in Montana for the Headwaters Spring Run-off comp and the Freeski World Tour, it’s pretty clear you’ve spent some time in this zone getting to know the terrain. What’s your favorite line?

Chris sticks the landing in the 2015 Headwaters Spring Run-Off

Each year is a little different but it’s usually a good mix of locals, Bozemanites, and semi-pros from around the region. In 2010 I took 6th place after doing a pretty big frontflip, which I later learned was the first invert in Run-Off history. In 2011 and 2012 I took 2nd place, and in 2014 I won.

I’ll never share my secrets … but the first finger of Jack Creek to the Rock Creek Dance Floor rarely disappoints.

Class 6 … Not for the faint of heart.

Give us a rundown of the infamous Class 6 line you’ve attempted to huck three separate times.

Class 6 is one of three chutes in the Headwaters known as the Whitewater chutes: Class 4, Class 5, and Class 6. All of these runs span about 1,600 vertical feet, average 40-45 degrees in pitch and terminate in large cliffs. Class 4 sees the most action as it’s the smallest cliff and has solid routes through it, especially on a good snow year. Class 5 to my knowledge has never been sent. Class 6 is a 60-footer, arguably the biggest of the three, has been sent by a few folks other than myself … but to my knowledge nobody has ever stuck it. I guess I’m the only skier to attempt it more than once. My first attempt was in March of 2011. On April 8th 2013 I went for it twice.

What is running through your head immediately before pointing your skis into Class 6?

Fear management is tough on this one. Because you have to hike to this line, you have ample time to reflect and that’s the hardest part. I never actually plan to hit the beast, but when big storms are heading our way it’s always lurking in the back of my mind. Usually I start my day with a hike in the Headwaters, and the snow is so good that I get to the bottom and think, “Holy sh*t, today is the day.” Then I hike back up there alone, while friends gather at the bottom. It’s quiet, my mouth is dry and my throat gets a bit tight. I click in to my skis, tell myself I’ve got this, and I drop in.

And what are you thinking 15 feet before launch?

Fifteen feet before launch everything goes quiet, everything stops and I feel incredibly calm somehow. My heart rate drops and it’s just me and the mountain. It’s pretty fun to rip those last few turns because that’s the freshest snow you’ll ski all year. It never has tracks.

Conditions obviously need to be perfect to consider attempting Class 6; what kind of day are you hoping for?

Wind can be your best friend here in Montana. The days that I’ve gone over Class 6 actually haven’t been big storm days. In fact, I think both days the snow phone reported small accumulations, but sometimes the wind deposits the snow just right. Ideally, though, for a stomp on this thing I think a 20+ inch day in late April would be your best chance at success.

Tell us a little bit about what you do with yourself, when not plotting mega hucks.

I used to coach the Moonlight Basin Freeride Team before the Big Sky merger. Now I have a night job cooking at a bistro here in Big Sky. It frees up my days to ski in the winter and ride my bike in the summer. I travel around in my big blue van during the off-seasons, I’m a Virgo, I love dogs, and I drink too much coffee.

And I think we all want to know—what kind of helmet are you wearing?

Will there be a fourth attempt?

I told myself in 2011 I’d never do it again, and here we are. Don’t hold your breath, but I think it’s safe to say you’ll see me going over this thing again someday. Next time I’ll be skiing away from it. I’d like to give a big shout to the Big Sky Ski Patrol for letting us get rowdy, Liberty Skis for the continued support, and to my Dad for getting me out on skis so young, and supporting this life I’ve chosen to lead.

Safe hucking to you Chris! Thanks for posting all the rad vids on Backcountry.com! 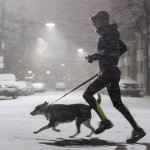 Yes Chris, you're an animal. It was such a great experience to work for you in Big Sky and spend the winter learning your ways. Cheers bud, keep bringing the onslaught.