by Matt Pizza
posted by

Backcountry Expert Gearhead Matt Pizza is an avid fly fisherman who has been fly fishing since he was a teen. He has fished all over Utah, as well as Idaho, Wyoming, a bit in Colorado, and even upstate Wisconsin and New York. Although trout makes up the bulk of his prey, he has been known to land pike and walleye, and has found a new love for catching bass on the fly. Here, he breaks down one of the essential skills for fly fishing, tying knots.

Tying knots is a huge part of fly fishing. There are dozens of knots to learn and they each serve a specific purpose. This guide will help you learn and become proficient with some of the more common knots so they don’t take up so much of your time … giving you more time to drink beer and catch fish!

This is the knot you will tie the most. You will use this knot to tie your fly onto your line.

The perfection loop is tied at the end of a piece of line in order to easily attach and detach from another piece of line, most commonly attaching leader or tippet to the fly line.

Once you have two pieces of line with a perfection loop at the end, you can attach them using this loop-to-loop connection. For purposes here the connection will be explained using a leader and the fly line.

This knot is most commonly used for joining two lines of different diameter or attaching, tying the backing to the fly line.

There you have it—five knots every fly fisher should know. Practice to the point where they come easily, and your day on the river gets that much better.

Fly Fishing 101: How to Tie your Fly Line

Fly Fishing 101: An Intro to Flies

How to Choose a Fly Rod

How to Choose a Fly Reel 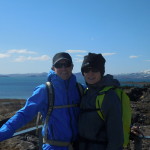 I've been looking for an article like this to practice my knots. The photos are so much better than hand-drawings. Thanks