by Lexi Dowdall
posted by

In the gentle rolling hills of Eastern Oregon, along the Umatilla River, you’ll find the old frontier town of Pendleton, Oregon. For over 100 years and through six generations of family ownership, the Pendleton Woolen Mill has cranked out beautiful woolen goods that reflect the culture and heritage of the American West.

I received my first Pendleton blanket two birthdays ago, carefully tucked among clumps of newspaper in a modest cardboard box with scant trimmings. The box was big, with ‘Happy Birthday, Cowgirl’ scrawled in black ink across the lid; I had no inkling of what lay inside. Pulling out sheets of newspaper, I discovered a beautiful green wool blanket with bold red and saffron stripes, a sight that was very familiar to me.

This particular blanket, or ‘Greenie,’ as it is affectionately known, had belonged to my aunt and uncle for nearly 40 years. I’d recently spied Greenie tucked away among camping gear in their garage. I’d mentioned the sighting to my aunt and daydreamed out loud about owning a Pendleton someday. My aunt decided that Greenie was ready for a change of scenery, and that it would be the perfect birthday gift. It’s still one of the best gifts I’ve ever opened.

Greenie was a Christmas gift my relatives had received one snowy winter decades ago. It first graced their bed, but was moved to their camping box in early spring because the thick wool fabric was so warm. Greenie enjoyed many camping trips down south to Utah’s San Rafael swell, a couple of river trips down the Colorado, and countless concerts spread out upon the grass beneath a starry sky.

Like all genuine heirloom blankets, Greenie bears a couple scars. Some came from wayward sparks thrown by campfires under the huge expanse of desert sky, and a couple of holes from intrepid moths that invaded the hall closet one winter. Greenie spent several years in the back of my cousin’s Jeep, until that Jeep was stolen at a trailhead in Washington. Luckily, my cousin had taken Greenie along for a riverside picnic, averting the loss of this family relic. His jeep wasn’t so lucky.

Following the stint with my rambling cousin, Greenie returned to Utah and settled back into the garage of my aunt and uncle. For seven years Greenie languished in the lonely garage with only a few adventures to break the monotony as camping became a less and less frequent event. This was when my aunt realized Greenie would find a better home in my arms—or tent, as the case may be.

I cherish Greenie, knowing it has spent the last 40 years with people I love. In the past two years I’ve taken this blanket camping in the Wasatch mountains, stargazing in the desert, and it has often kept me warm while drinking a beer in the parking lot after long days of skiing. I shared my first kiss with the gentleman I love on this blanket after a romantic picnic lunch in the park. I recently took Greenie along for a road trip up to Jackson Hole and it kept our canine companion, Luna, warm after a misguided dip in frigid Bear Lake. And hopefully that’s just the start to another 40 years of adventure with old Greenie along for the ride, or at least until I find a worthy recipient to pass it to the same way it was passed on to me.

The incredible thing about this blanket, despite four decades of adventures, is that it’s still soft and warm and the colors are bright. While lesser blankets would have faded or become ratty,this one is still going strong. It’s a testament to the craftsmanship that you’ll find in a genuine Pendleton blanket. These blankets really are made to go places, and they really are built to last a lifetime. Few pieces of gear will make a statement, or spark a conversation, like a 40-year-old striped blanket.

@FlyFishNut - that is SO cool! My friends actually began calling my Greenie "Linus" (like the Charlie Brown character) because I take it on any and all adventures. It's pretty comical! Thank you so much for reading and sharing your own experience with Pendleton - too neat!

Great read, Lexi - it is a huge "sense of place" or more so a sense of family and the places they traveled that comes from having an item that in this case warmed and comforted them. I cherish the items my dad left me, like a canteen cup, a canoe or even gloves that are almost worn out.

I have the exact same blanket and am guilty of hoarding it! I keep it next to my bed and do not allow the kids or dogs to use it because it is so nice. The green blanket is reserved for me when I need an extra layer on cold nights or for naps in the hammock.

I'm a little ashamed of being selfish of my Greenie and hearing how durable your blanket is I'm going to start sharing it and taking it places so when my daughter is grown up she can have it and the same memories it created.

Thanks for sharing your story.
B 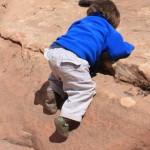 Lexi, great story. My camping van's first van-warming (is that even a term?) gift was a green Pendleton blanket that lives on my mattress. It is just so comforting and inviting. Really iconic.

Congrats Ryan!
That's so cool : )
Thanks for sharing!!

I read your story and was so intrigued that I wanted to buy a Pendleton blanket myself. I love the idea of having a wool blanket, and taking it places, what a great story. Then I realized that I too have a wool blanket that was given to me by my parents. I am originally from Indiana and when I moved to Utah they gave me the blanket because of the unique design that looks Native American. I literally use this wool blanket almost everyday, and after reading your story I decided to look at the label, I had never heard of Pendleton Woolen Mills before, but sure enough the blanket that I have is a Pendleton. I called my parents right away and my mother told me that her parents bought this blanket on their honeymoon on a 3 week trip out west from Indiana. So my mom says that it is around 63 years old!