How to Measure Your Torso:
Measure your torso length by bending your head forward so your chin touches your chest. Feel for the most prominent bump at the back of your neck. Now measure from that point down to an imaginary line connecting the tops of your hips around your back. This works best with a partner's help.

If you're spending all day trying to tackle a FKT of one of those brutal hilly rides with plenty of climbs, you'll want to keep your load minimal and hydration plentiful. Look no further than the Evoc CC 2L Plus 2L Bladder Hydration Pack, which offers the space for hydration (included), a tube, and a multi-tool, and nothing you don't. This compact pack is lightweight, adding less than a pound to your ride weight, and comes with a 2-liter bladder for instant use right out of the box. For those ultra-demanding days, the CC 2L expands to hold the 2-liter included Evoc bladder, which is designed with a full-slide top for fast and easy filling.

Very similar to the Cambelbak Rogue

For gravel riding and short mountain bike rides I’ve been using a Camelbak Rogue for years. I wanted another one as a backup but the Rogue has been re-done since I first bought one and some of the reviews on the new model gave me pause. The EVOC CC 2L Plus looked very similar to my older Rogue so I thought I’d give it a try. Since I’ve so thoroughly tested the original Rogue I can’t help but compare the two. The EVOC has slightly less storage than the already minimalist Rogue so that’s a notch against it. However, I love the way the bladder on the Evoc opens for filling. It’s essentially a giant and very secure zip-lock. It’s much easier to use than the bladder in my Rogue. The EVOC bladder attaches to the pack with a small, flimsy loop of velcro that so far hasn’t been a problem but I view it as a potential weak point. The EVOC is comfortable, lightweight, and breathable. The hose and mouthpiece works great. I like this item and I do recommend it but that being said, if I ever need another one I’ll probably go back to the Rogue just for the tiny bit of extra space that it provides. 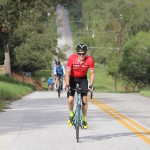