If you're searching for storage that doesn't sacrifice stability on long trail rides, grab the CamelBak Mule LR 15L Backpack for a low-profile carry and easy hydration while you ride. This pack is outfitted with CamelBak's 3-Liter CRUX lumbar reservoir, offering a more stable shape and placement on the pack than a traditional reservoir. The reservoir also compresses automatically as it drains, ensuring that you won't have that last bit of water sloshing around an empty bladder as you ride. The reservoir is tucked away in a lower pocket that also houses the integrated rain cover and bike-tool organizer, giving you convenient one-stop access to a host of important items.

The "LR" in this pack stands for "Low Rider" which is an accurate title given its low-profile design and low center of gravity. Thanks to the Dual Wing hip belt you've got more of the load placed on your hips, giving you greater stability on winding uphills and easier upper body movement for the whole ride. As the name suggests, the Dual-Wing belt system uses two belts—an inner belt that supports and stabilizes, and an outer belt that both compresses the load and offers a quick and convenient storage space on the back of the pack for layers and gear.

Great redesign from the old model

The 2018 backpack has two major flaws: 1. the weird roll pad where the upper part of the pack leans against your back. This has a couple of hard formed pads to keep the pack off your back and improve airflow. But man are they uncomfortable. It is like someone is constantly pressing on your back between your shoulderblades. Not hard, but just enough to be annoying. Like if it was a person you would turn around and yell at them after a min or two. 2. Bladder insertion point. You put the bladder in by the top. Not hard to do when the bag is empty even if the bladder is filled to capacity, but you would have to push it past all the gear in your bag and jostle and rearrange your kit every time. If you don't keep the pack filled with stuff, it shouldn't be an issue. These two issues combined with the intended use of 16+hrs a day on a bike for 9 days while I do an epic bikepacking trip mean this bag got returned. I was temped by the sale price to get gear I suspected was sub-optimal, and that turned out o be pretty unusable for my intended purpose. I purchaced the 2019 HAWG (the 20L version of the MULE) and the 2019 version fixes both of these product breaking flaws. The 2019 version is well worth the extra cost. I really like it so far, just a fair bit heavy for it's size, making it 4 stars instead of 5. EDIT: apparently they don't even list the old pack anymore. 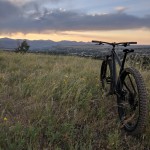