Knock your brother-in-law's socks off with fresh caught, grilled trout stuffed with lemon slices, tarragon, and butter, served steaming hot with gently charred asparagus and an ice-cold pale ale. Of course he's bound to be all up in your business, asking you about your secret weapon, but simply out of principle you'll never tell him it's the Biolite Portable Grill. An accessory to the Biolite CampStove, this lightweight, portable grill has easy-to-fold features and comes with a durable plastic travel cover. The fuel intake lid is easy to flip open and re-stoke with more biomass without disrupting the grilling process—so you get that wood-fire flavored goodness and Chef of the Year award.

I think this is a really cool idea for a stove but it is a little too techy for my liking. I think I will be sticking to my msr camp stove for camping because it is a little more simple and basic to use versus the biolite grill, I'm a good old fashioned propane girl I'd say haha..the biolite was a little too big to haul and if you were grilling something for a longer time, we had trouble keeping the pellets burning when you added more. But it was a cool concept that you could charge something with the fire. For instance if you have a rechargeable headlamp that needed a charge you could plug it in and not use electricity. Very cool! This would be a great gift for that techy person out there that likes to camp or a good grill to have if you lived in an apartment or something and want a grill to use occasionally that doesn't take up a lot of space. 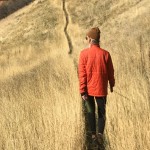 BioLite makes products that help you feel at home, off-grid, no matter where you are in the world. We design and build stoves, lights, and solar panels that harness the energy around you, ready for the next adventure or power outage.

BioLite's ecosystem of products to cook, charge, and light your life off-grid.

BioLite's first-ever short film. In the Kakamega region of western Kenya, Kennedy Yamame is bringing light, power, and music to the community he grew up in with a revolutionary new solar system that fits inside a shoebox.

Cook your favorite meals over wood with one of the lightest tabletop grills on the market. Transform your BioLite CampStove 2 into a wood-fired grilling surface with this seamless and fun attachment. 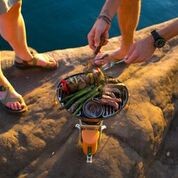 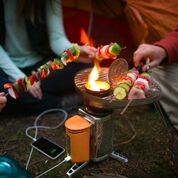 The reason I use the stove.

I got the Biolite stove when it first came out with a pre order. Then, this grill attachment came out and I really wanted one. The first time I used it, I went outside and grabbed a bunch of evergreen twigs and branches that were on the ground. It cooked alright, but what I found was that it transfers the taste of what wood you are using into the meat. So my chicken kinda tasted like a pinecone. So the next time I used it I used a bag of apple wood chips. The flavor was incredible and made the best chicken thighs. I have used this thing to cook burgers and steaks for people by just going out on the back deck instead of using the large barbecue grill. People are amazed at the flavor and ask where to get one. I have brought it to Hawaii and cooked steak, which had our neighbors asking what I was cooking because it smelled so good. I use it all the time and it isn't just for camping. I can cook such awesome tasting stuff on this thing. Get an assortment of different wood smoke chips and check it out yourself. You will be amazed at the taste.