The Tiger Wall series consists of the lightest tents that Big Agnes makes with two doors, and the Tiger Wall UL2 MtnGlo Tent includes MtnGlo lighting for even more convenience without weighing backpackers down too much. MtnGlo technology is an LED lighting system sewn into the upper seams of the tent that is powered by three AAA batteries (batteries not included). Once on, the lights create a nice mood lighting that's ideal for rigging gear, playing games, checking maps, or getting that perfect tent glow shot.

The tent features a silicone treated nylon fly and floor with fully sealed seams to keep wet weather out when you're hunkered down for the night, while steep walls increases space without adding bulk to maximize space within the tent, so you can stretch out and play a game by the MtnGlo lights while you wait out the storm. When you're ready to break camp, the flexible lighting system allows the tent to be easily packed away just like any other tent, and the DAC aluminum Featherlite poles keep the trail weight under three pounds for comfort when you're logging long miles on a daily basis.

Iâd like to think of my time in the outdoors as being removed from modern amenities, luxuries, and other distractions. And in general, I get somewhat upset when a comrade or partner pulls out their cellphone and starts listening to a podcastâor Sadeâwhile sitting at the bottom of the most remote place I can imagine being. But having acknowledged that I like good gear, and that Iâm not traipsing through fern-lined canyons with grape leaves around my privates, this little mtnGLO string of lights has made it to my exception list of outdoor amenities. And if the batteries should ever run out while in the backcountry, Iâll be none the happier for having carried in that extra four ozâs (the weight of the light system plus three AAA batteries) because the tent is very good and darn light (pun intended) too. Back to Sadeâor Leon Bridges for the younger folks out there. The first time my partner and I flicked the switch (pushed the button) on the LEDâs, something special happened in that tent. As a photographer of 25 years, I am well-attuned to how light can affect mood. And in this case, the glow was magical, if not steamy. But if you are older than 35, and didnât eat your carrots growing up, youâll still need your headlamp to read. The lights at their maximum brightness werenât strong enough for me to comfortably read bedtime stories. Weight, Durability and Stability: Clocking in at ~3lbs 2oz. (thatâs including three AAA batteries and the footprint) the tent still weighed less than my solo rig. Itâs only a tad smaller than the other two-person tent I have used for almost seven years. My point is that you get a lot of space for so little weight. And don't let ultralight material concerns bake-in too far. While in a canyon for a three-day solo, the winds were high into the thirties with even stronger gusts. I had the tent fully guyed-out and it felt and looked very stable. Nothing suffered from many hours of unrelenting abuse. The Tent Features: A desert/warm-climate friendly feature of the Tiger-Wall is the white mosquito-net mesh that is used on the vast majority of the tent. As I lay down on a 60-degree evening at the bottom of a high-walled canyon, the ceiling vista had me floating amidst the canopy of trees silhouetted against the stars and planets above. The frogs, crickets and great horned owls formed the soundtrack to this moment. All to be crashed by the snoring of my buddy in his vastly inferior and heavier tent nearby. The fact that the mesh is white--versus the black mesh on my last three tents--at the very least gives me the internal sense that it is reflecting the sun in the morning rather than absorbing the heat. Whether there is any science to back up this claim is another matter. But if you care about aesthetics, the white mesh can get dirty very fast. One annoyance that became more significant after about my sixth day of using the tent was the door situation as it relates to the rain fly. I havenât quite pinpointed the problem, but something about the design was causing the fly to get caught in the tent zipper. Also, when the fly door is fully rolled up, I noticed that it still didnât create an efficient and wide opening to move through. It definitely isnât a show-stopper. But I noticed it. In all honesty, no matter what I will always have my headlamp with me. But for me, turning up the steamy romantic mtnGlo feel is worth a few extra ounces. Some ultralighters are going to be rolling over in their sleeping bags thinking about the extra four oz.âs that have been permanently stitched into this tent. In which case, they can get the exact same shelter without this hot feature. Leaving aside the mtnGLO perks, this tent sleeps two comfortably and doesnât skimp on features in order to achieve its featherlight trail weight. There are plenty of storage pockets. Ventilation and visibility (without the fly attached) is outstanding on account of the mesh that comprises the majority of the tent. 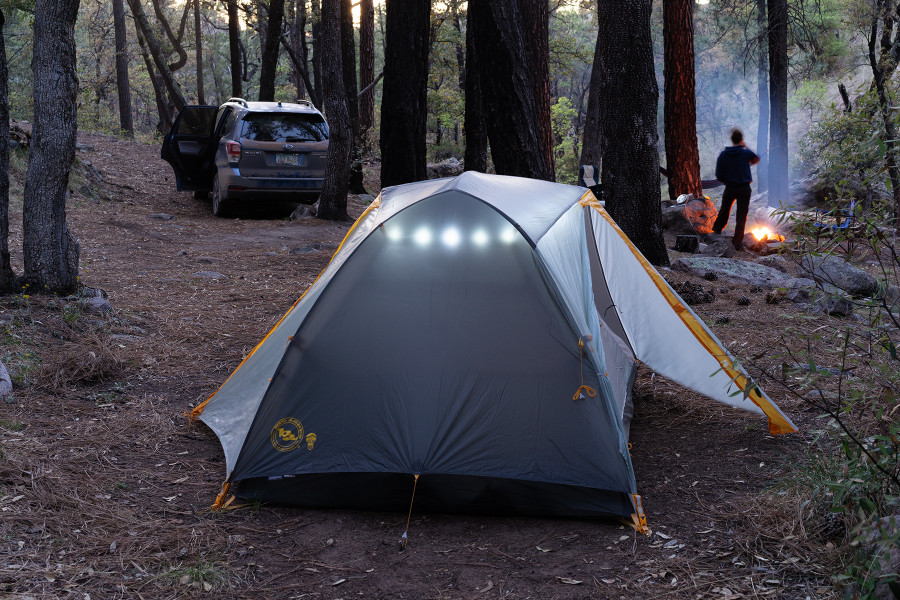 The Tiger Wall UL mtnGLO® tents are every ultralight backcountry traveler's dream tent. Incredibly lightweight features include the comfort of two doors and two vestibules, a single-pole design that creates a spacious footprint, and the added bonus of ambient mtnGLO® tent lights.